A year after Intel first announced Project Athena — a set of laptop specifications underpinned by Intel processors to build what Intel believes will be the next generation of computers equipped for 5G, AI-based activities and more responsive work — hardware makers are starting to roll out the first Chromebooks based on the specs, starting with Samsung and ASUS. At CES 2020, Samsung unveiled a new 2-in-1 Galaxy Chromebook, and Asus launched the Chromebook Flip C436.

The Samsung device will start shipping this quarter, Q1, priced at $999.99, while the ASUS machine is estimated to arrive sometime in Q1 or Q2 (it’s not disclosing pricing).

There will be a lot more to come on Athena later today during Intel’s CES keynote at 4pm Pacific time. Samsung and ASUS’s devices are a sneak peek of sorts and point to how Intel (and Google) are getting an ecosystem on board to raise the performance and feature game of laptops — a consumer electronics category that has otherwise been under pressure and largely stagnating as users opt for smartphones as primary mobile “computing” devices, and connected TV screens for stationary use — making the replacement cycles for laptops longer and longer.

Samsung says that at 9.9 mm, this Galaxy Chromebook — which will be available in Fiesta Red and Mercury Gray, both aluminum — is its thinnest yet, and that push to keep making its machines smaller comes also with making them more powerful. No surprise there: With laptops continuing to compete against faster, very media-friendly smartphones, the fact that laptops continue to trump them in other ways become unique selling points.

Its 13-inch screen has a 3.9 mm bezel and comes with an AMOLED display (also a first for a Samsung Chromebook) for 4K UHD resolution, with the machine powered by Intel’s 10th-generation Intel Core i5 processor with Intel Wi-Fi 6 (Gig+). It also comes with built-in pen support, a fingerprint sensor, Google Assistant and close integration with Samsung Galaxy smartphone services.

“The notion that we do everything stationary at a desk is a thing of the past, and people need premium devices built for our new reality,” said Alanna Cotton, senior vice president and general manager at Samsung Electronics America, in a statement. 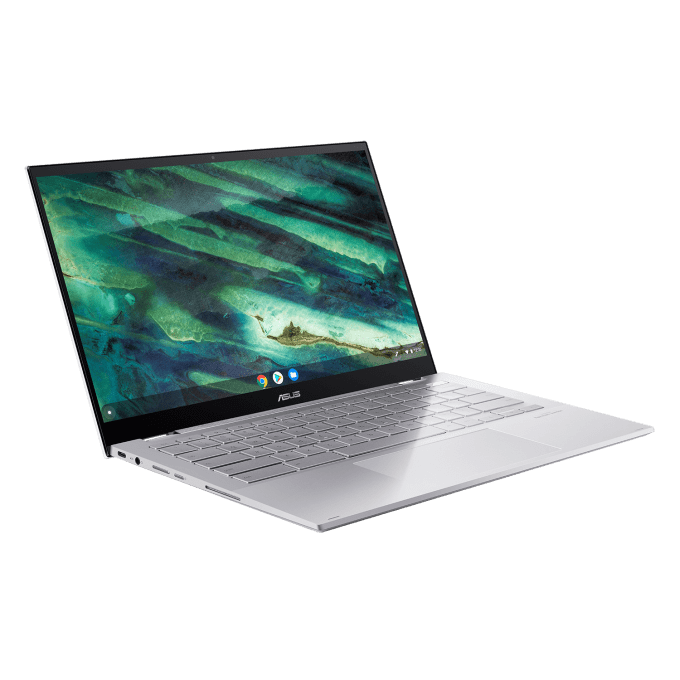 The ASUS machine, meanwhile, also has a 13-inch screen, but opts to house it in a thicker body at 13.7 mm. However, with a magnesium alloy body, its weight is coming in at just 2.4 lbs, making it portable in a different sense to Samsung’s new Chromebook.

Processor specs are the same as the Samsung, and it, too, has stylus support and a fingerprint sensor. An “all-day” battery life specification speaks to the kind of usage and users ASUS is aiming for — like Samsung, possibly someone who is not a student but a working person, and someone who will be a heavy user of the machine, with expectations to match.

The idea with both the Samsung and ASUS machines is that the Chromebook is growing up: long a popular model in the education sector, these machines are aiming at an older market of professionals and “prosumers.”

“For years, students have come to love Chrome OS in classrooms around the world—but today, Chromebooks are being used for so much more, by the younger generation and working-professionals alike,” said Kan Liu, senior director of Product Management at Google, in a statement. “As we see the demand for premium Chromebook experiences rise, we are investing more and more with partners … to build the next generation of flagship Chromebook product innovations and offerings.”