If you know nothing else about particle accelerators, you probably know that they’re big — sometimes miles long. But a new approach from Stanford researchers has led to an accelerator shorter from end to end than a human hair is wide.

The general idea behind particle accelerators is that they’re a long line of radiation emitters that smack the target particle with radiation at the exact right time to propel it forward a little faster than before. The problem is that depending on the radiation you use and the speed and resultant energy you want to produce, these things can get real big, real fast.

That also limits their applications; you can’t exactly put a particle accelerator in your lab or clinic if they’re half a kilometer long and take megawatts to run. Something smaller could be useful, even if it was nowhere near those power levels — and that’s what these Stanford scientists set out to make.

“We want to miniaturize accelerator technology in a way that makes it a more accessible research tool,” explained project lead Jelena Vuckovic in a Stanford news release.

But this wasn’t designed like a traditional particle accelerator like the Large Hadron Collider or one at collaborator SLAC’s National Accelerator Laboratory. Instead of engineering it from the bottom up, they fed their requirements to an “inverse design algorithm” that produced the kind of energy pattern they needed from the infrared radiation emitters they wanted to use.

That’s partly because infrared radiation has a much shorter wavelength than something like microwaves, meaning the mechanisms themselves can be made much smaller — perhaps too small to adequately design the ordinary way. 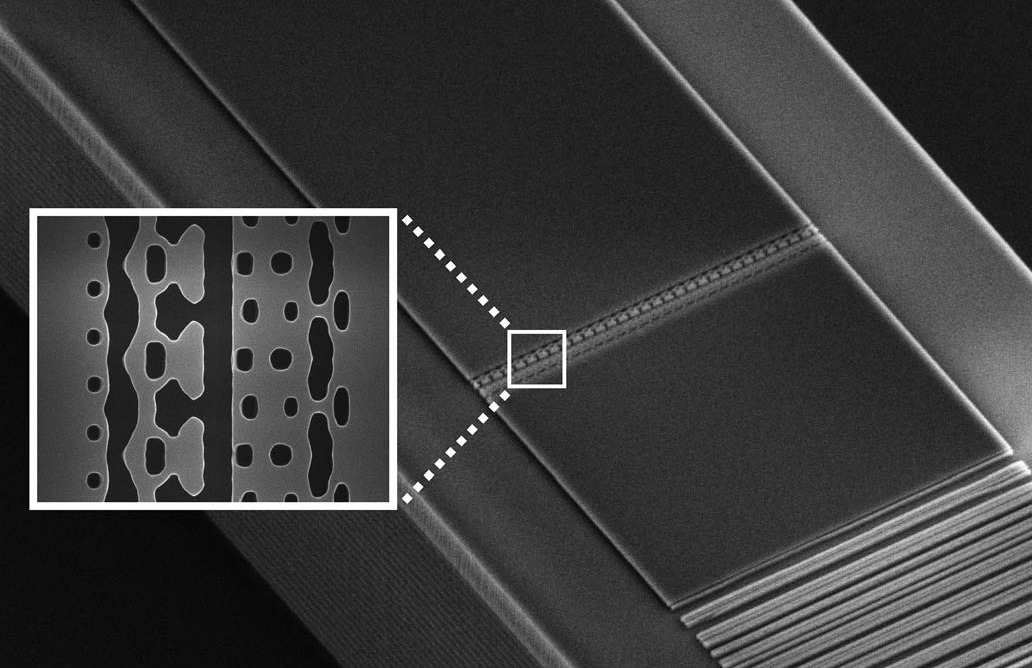 The algorithm’s solution to the team’s requirements led to an unusual structure that looks more like a Rorschach test than a particle accelerator. But these blobs and channels are precisely contoured to guide infrared laser light pulse in such a way that they push electrons along the center up to a significant proportion of the speed of light.

The resulting “accelerator on a chip” is only a few dozen microns across, making it comfortably smaller than a human hair and more than possible to stack a few on the head of a pin. A couple thousand of them, really.

And it will take a couple thousand to get the electrons up to the energy levels needed to be useful — but don’t worry, that’s all part of the plan. The chips are fully integrated but can be put in a series easily to create longer assemblies that produce larger powers.

These won’t be rivaling macro-size accelerators like SLAC’s or the Large Hadron Collider, but they could be much more useful for research and clinical applications where planet-destroying power levels aren’t required. For instance, a chip-sized electron accelerator might be able to direct radiation into a tumor surgically rather than through the skin.

The team’s work is published in a paper today in the journal Science.