The app industry is as hot as ever, with 194 billion downloads last year and more than $100 billion in consumer spending. People spend 90% of their mobile time in apps and more time using their mobile devices than watching TV. Apps aren’t just a way to waste idle hours — they’re big business, one that often seems to change overnight.
In this Extra Crunch series, we help you to keep up with the latest news from the world of apps, delivered on a weekly basis.

The top apps of the year… and the decade

App Annie this week released its list of the year’s top apps. And this time around, it also included the top apps of the past 10 years in its analysis. Outside of games, Facebook dominated the decade, the firm reported. It ran the four most-downloaded apps of the decade, including Facebook (#1), Messenger (#2), WhatsApp (#3), and Instagram (#4). Other communication and social media apps were also among the most popular over the past 10 years, claiming seven out of the 10 top spots, including Snapchat (#5), Skype (#6) and Twitter (#10). Social video platforms TikTok and YouTube also placed on the list at #7 and #9, respectively. And yes, it’s pretty notable that TikTok — an app that only launched outside of China in 2017 — is one of the most-downloaded apps of the past decade. Meanwhile, even though dating app Tinder was the most profitable app this year, Netflix was the No. 1 app by all-time consumer spend over the past decade.

Related to its round-up of the top apps, App Annie also offered some preliminary data on downloads and consumer spending in 2019. Its current figures don’t include calculations from third-party app stores in China, (like those referenced above), which App Annie tends to provide in its annual State of Mobile report. Instead, App Annie reports we’re on track to see 120 billion apps from Apple’s App Store and Google Play by the end of 2019, a 5% increase from 2018. Consumer spending was also up 15% year-over-year to reach $90 billion, it says. Expect a full analysis to come in Q1 2020.

Facebook still sat at the top of the charts for 2019. The company’s Messenger app was the most downloaded non-game app of 2019, followed by Facebook’s main app, then WhatsApp. Tinder switched places with Netflix for the No. 1 spot on this chart — last year, it was the other way around. (For more details, TechCrunch’s full review is here.)

According to a year-end report by GamesIndustry.biz, mobile gaming grew 9.7% year-over-year in 2019 to reach a market value of $68.2 billion. The gaming market as a whole was worth $148.8 billion, the report said. Smartphone games were the biggest piece of this figure, at $54.7 billion, compared with $13.4 billion for tablet games. That means smartphone games are still bigger than PC, browser PC games, boxed and downloaded PC games, and console games. 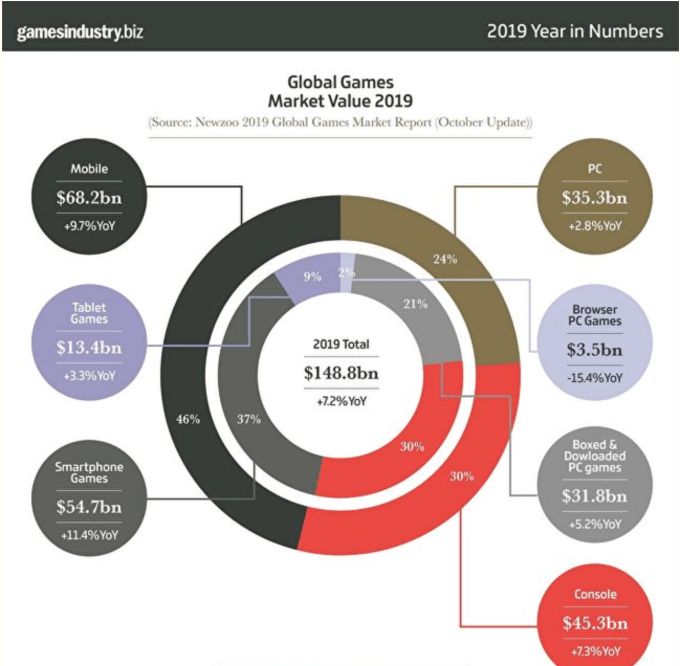 To beef up its new cloud gaming service Stadia, Google this week bought game development firm Typhoon Studios, who were set to release their cross-platform title and first game, Journey to the Savage Planet. Google had said it wants to build out a few different first-party studios to release content on Stadia, which is where this acquisition fits in. Meanwhile, Facebook this week acquired the cloud gaming startup, PlayGiga, which had been working with telcos to create streaming game technology for 5G.

Stadia has a big mobile component, as its controller can play games on compatible mobile devices like Pixel phones. Gaming has been a big part of Facebook’s mobile efforts, as not only a platform where games can be played, but also a place to watch live game streams, similar to Twitch. But the big gaming trend of the past year (which will continue into 2020) is cross-platform gaming — thanks to games like Fortnite, Roblox and PUBG Mobile, as well as devices like Nintendo Switch, gamers expect to continue playing no matter what screen they happen to be using at the time. 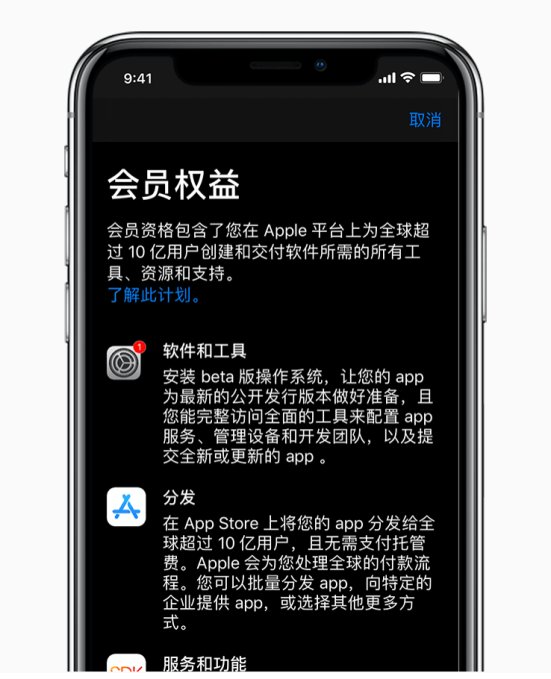 Apple launched a dedicated mobile app for its developer community in November, with the arrival of the Apple Developer app, which was an upgraded and rebranded version of Apple’s existing WWDC app. The app lets developers access resources like technical and design articles, as well as read news, watch developer videos, and enroll in the Apple Developer program. Now that the program is open to China through the app, Apple announced this week.

From the app, developers in China can start and complete their Apple Developer membership and pay with a local payment method on their iPhone or iPad. They can also renew their membership, to keep their account active. Apple has been heavily investing in growing its international developer community by launching developer academies and accelerators in key regions, among other initiatives. Over the past year, Apple grew its developer community in China by 17%, the company earlier said.

So much for nostalgia, Rewound gets yanked from the App Store

We hope you downloaded this fun app when we told you to in last week’s column! Because now it’s gone.

Rewound, briefly, was a clever music player app that turns your iPhone into a 2000’s era iPod, complete with click wheel nav. The developer was able to sneak the app into the App Store by not including the actual iPod UI, which infringes on Apple’s own product design. Instead, the UI pieces were hosted off-site — on Twitter accounts, for example. Users could find them and download them after they installed the app. Technically, that means the App Store app itself wasn’t infringing, but Apple still kicked it out. The developer also charged a fee to access the Apple Music features, which may have been another reason for its removal.

It’s no surprise Apple took this step, but the developer seems confused as to how the app could be approved then pulled later on, even though it hadn’t changed. That’s actually par for the course for Apple’s subjective, editorial decisions over its App Store, however. Now Rewound, which has 170K+ users after only a few days, will focus on a web app and Android version.

Facebook is building its own OS so it can ditch Android