A security researcher has found on the dark web 1,562 unique email addresses and passwords associated with Ring doorbell passwords.

The list of passwords was uploaded on Tuesday to an anonymous dark web text-sharing site, commonly used to share stolen passwords and illicit materials. A security researcher found the cache of email addresses and passwords, which can be used to log in to and access the cameras, as well as their time zone and the doorbell’s location, such as “driveway” or “front door.”

The researcher reported the findings to Amazon — which owns the Ring brand — but Amazon asked that the researcher not discuss their findings publicly.

At the time of writing, the dark web listing is still accessible.

It’s the second reported leak of Ring credentials today. Earlier on Thursday, BuzzFeed News reported that a similar cache of data on more than 3,600 Ring doorbells was posted online. The data appears to be a similar-looking data set to that which BuzzFeed obtained. Anyone with a working email address and password can log into a Ring account and obtain the Ring customer’s address, phone number and some payment information. The credentials also give the user access to the Ring devices in that home, including access to historical video data if the setting is enabled.

It’s not known how the data was exposed. 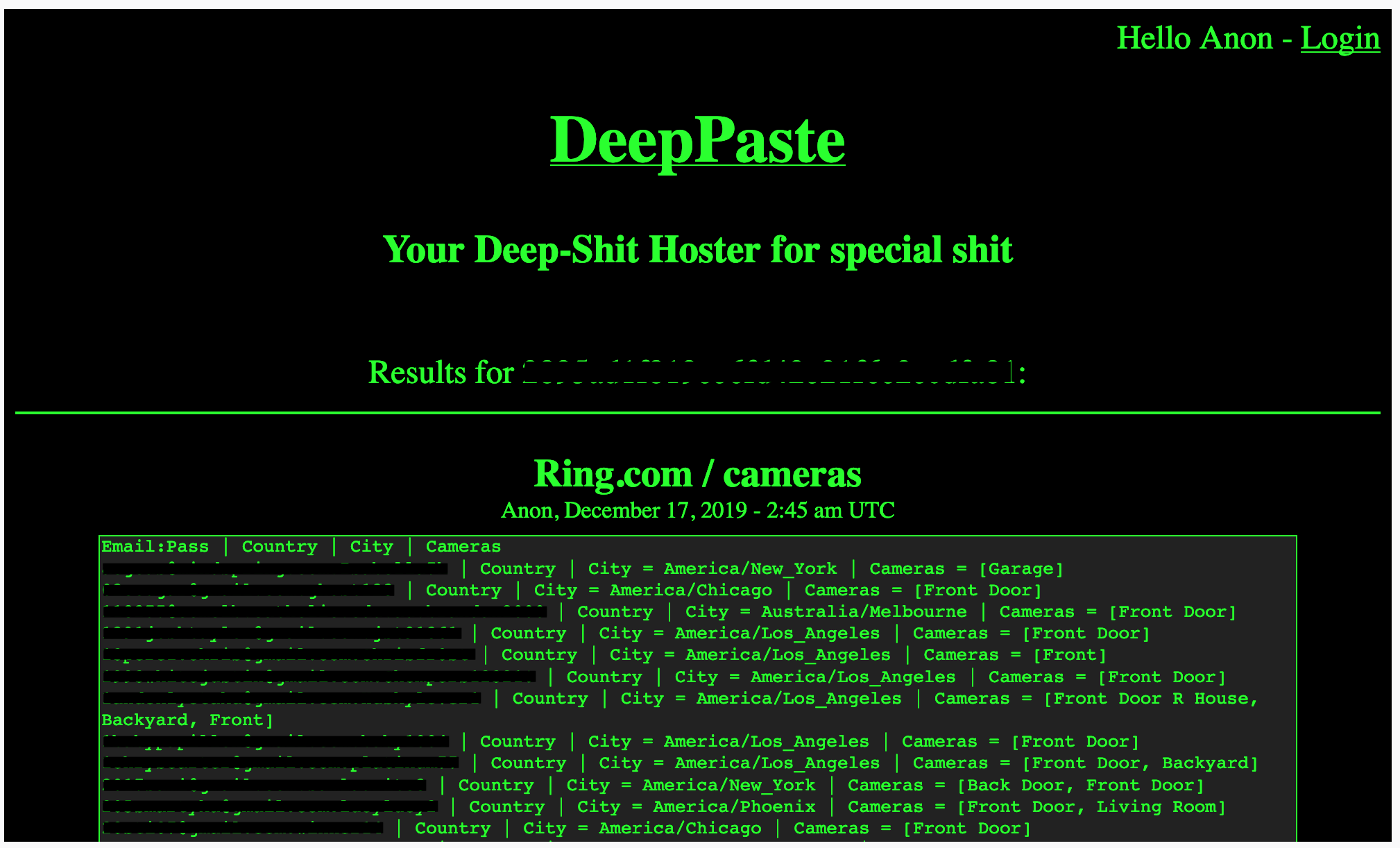 TechCrunch contacted a dozen individuals whose information was found on the dark web listing. We provided each person with their password. Of those who responded, all confirmed that it was their password.

On our advice, all changed their passwords, and some enabled two-factor authentication on their accounts.

Nearly all of the passwords we reviewed were relatively simple and potentially easy to guess. It’s possible that the passwords were obtained by password spraying, a technique hackers use to guess passwords, or credential stuffing, where hackers take existing sets of exposed or breached usernames and passwords matched against different websites to access accounts.

Ring spokesperson Yassi Shahmiri did not respond to a request for comment prior to publication but in an email after we posted denied a data breach.

“We’ve notified customers whose accounts we have identified as exposed and have reset their passwords. In addition, we are continuing to monitor for and block potentially unauthorized login attempts into Ring accounts,” the spokesperson said.

However, of those we spoke to none had been contacted by Ring — contrary to the company’s claim.

It’s the latest security lapse involving Ring security cameras in the past week. News reports emerged last week of how hackers were breaking into Ring cameras around the U.S. Some crime forums are sharing tools to break into Ring accounts. Then earlier this week, Motherboard confirmed that Ring cameras have shoddy security measures — such as not telling users when other people log in, when the cameras are being actively watched and by using a weak form of two-factor authentication. Ring put much of the blame on the users for not using “best practices.” But others panned the response for failing to put in “basic security measures” to protect users.

Ring has also come under fire by lawmakers for its close relationship with law enforcement agencies around the U.S.

It’s not known how many sets of exposed Ring account credentials are floating around the dark web. Users should protect their accounts with strong, unique passwords and enable two-factor authentication.