Amazon’s Ring is partnering with the National Center for Missing & Exploited Children (NCMEC) in the U.S. to publish missing child posters directly in the Neighbors app by Ring. The free app is used by local communities to share news about local crime and other safety incidents and is accessible to everyone, not just people who own a Ring video doorbell or camera.

NCMEC today works to recover missing children in the U.S. by operating a 24-hour hotline (1-800-THE-LOST) and it shares information about missing kids through AMBER Alerts and social media posts. The new partnership with Ring will expand NCMEC’s reach to the app’s community, which includes millions of people in the U.S. That community, of course, includes Ring video doorbell and security camera owners — people who may have critical information to share with NCMEC. 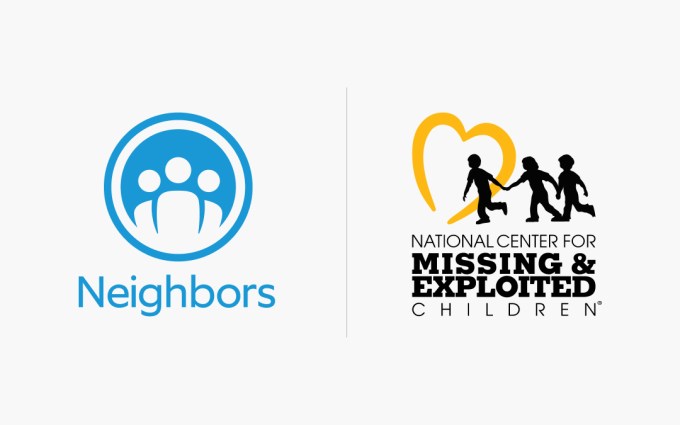 Ring notes it recently helped reunite a family with a missing child in Albuquerque, N.M. This particular case, however, didn’t involve an abduction. Instead, the missing 14-year-old boy had been waiting for his dad to pick him up at the wrong gas station after a football game. The child didn’t have a working phone or his parents’ numbers, so had no way to phone for help when dad didn’t show. And he didn’t ask for help. The family contacted the police and posted a notice to the Ring Neighbors app. Another app user had seen the child and alerted his parents to his whereabouts.

With the new partnership, NCMEC looks to formalize this same sort of information-sharing that already takes place in Ring’s Neighbors app, as users reshare with community members notices and alerts they saw elsewhere, or post for help about their own missing kids, as in the above case.

Ring says the NCMEC’s missing kids posters will become visible to all users whose neighborhoods fall within the area of interest. The posts will also prompt users to contact the authorities if they have any information that could help the search.

According to the FBI, there were 424,066 cases of missing kids reported to law enforcement in 2018, Ring adds.

The partnership comes at a time when Ring’s public image is in need of rehab.

The Amazon-owned company has been criticized for its deals with police, which invited a congressional investigation, as well as for its plans around the potential use of facial recognition technology. More recently, Ring doorbells were found to have exposed home Wi-Fi passwords to hackers. And because Ring doesn’t require increased security measures like two-factor authentication (it’s optional), hackers who had acquired username and passwords for Ring devices used that information to attack and harass customers across the U.S.

These attacks led a number of consumer and privacy groups to issue a product warning about Ring cameras this week, which also noted that Ring’s hidden data — shared by its Neighbors app — includes the location of devices.

Despite these serious concerns, Ring has an active and growing user base for its Neighbors app. To date, Neighbors has been installed 7 million times in the U.S., according to Sensor Tower. More than 10 million Ring doorbells, meanwhile, have been installed worldwide.