In the wake of WeWork’s embarrassing IPO rout, you might imagine that startups working in similar markets would cool it for a bit. Perhaps they could work on cutting spending, improving their gross margins, and, say, shooting for profitability.

Not so, at least in one case. Instead of doing those things, China-based Ucommune filed to go public in America this month. The WeWork competitor is mostly a co-working business. It’s also a marketing company. And it has some of the worst economics we’ve seen in a company since WeWork.

Why this company is trying to go public isn’t hard to understand. It needs the cash. But at the same time, the chance of it debuting at a price it likes seems slim, given the market’s recent history — as well as Ucommune’s own.

Before we chat about the business fundamentals of Ucommune, a primer on the company itself.

TechCrunch reported that its final private round valued Ucommune at $3 billion.

All that capital was put to work. According to is F-1 filing, Ucommune operates 197 co-working facilities in 42 cities. The company also claims more than 600,000 members and nearly 73,000 workstations.

How many unicorns will exit before the market turns?

The WeWork similarities continue: While discussing itself in its IPO filing, the firm touts an “asset-light model,” which it claims helps property owners “benefit from our professional capabilities and strong brand recognition” as well as allowing its “business to scale at a cost-efficient manner.”

How to lose money

As a primer for all you non-accountants, here’s how you make money as a company: First, generate some revenue. Next, deduct the direct costs that that revenue engendered. What’s left is called “gross profit,” and the relative total of gross profit generated from revenue is called gross margin. From there, subtract your operating costs. If there’s anything left over, that’s operating profit. Now take your operating profit and remove taxes and other costs. What remains is net income.

As you can quickly see, the more gross profit a business generates from its revenue, the more money is has left over to pay for operating expenses. So, revenues that generate lots of gross profit — called high-margin revenue — are better than those that don’t. 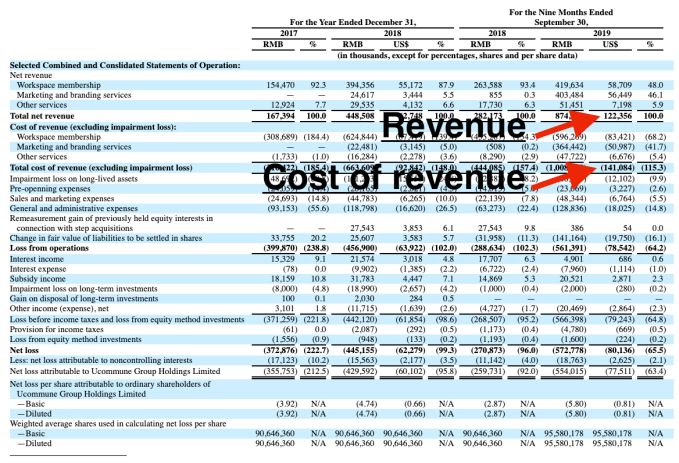 Ucommune is unprofitable, unsurprisingly. (If it feels like we’re overly focused on gross margins, keep in mind that software companies are worth as much as they are in part because they have very high gross margins.)

Things get a bit worse when we look further.

Digging in, Ucommune operates two main businesses. The first enterprise is co-working, which generated just less than half of the company’s total revenue during the first three quarters of 2019. Its second largest business is a marketing effort. Ucommune acquired a company called “Shengguang Zhongshuo” in December of 2018, a deal that lets the company drive revenue by selling “branding services and online targeted marketing services.”

Ucommune is therefore a hybrid co-working and services business. Neither piece of the whole is attractive from a margin perspective. For example, the company’s $58.7 million in co-working revenue earned during the first nine months of 2019 was nearly entirely offset by lease costs ($49.6 million) alone, before the company staffed and otherwise managed the locations in question.

(Bear in mind as we go along that this company wants to go public.)

A window that is closing, mind. Ucommune’s operations burned through $32.4 million in the first three quarters of 2019. If the company kept consuming cash at its prior pace, we can estimate that it will not have enough cash to make it to the end of Q2 2020. Which is why Ucommune is going public.

The only counterargument to the mess that is Ucommune’s business is that it is growing quickly. That’s true. The company’s revenue grew from ¥282.2 million in the first three quarters of 2018 to ¥874.6 million over the same time period this year. That’s quick!

But instead of demonstrating operating leverage (losing less money as its revenue grew), the company lost more money this year than the last, making its business appear likely to keep burning acres of cash while it grows. And you have to ask yourself if it is a good business, why are its private investors pushing it onto the public markets instead of giving it more of their own money?

They must have known, landing this close to WeWork, how this was going to look. And that’s not confidence-inspiring.