In addition to its new report on the top apps of 2019, app store intelligence firm App Annie also closed out the year with its Decade in Review analysis, which looks at the most popular apps over the past 10 years. Not surprisingly, Facebook dominated the charts, claiming four of the most-downloaded apps of the decade with Facebook, Messenger, WhatsApp and Instagram. Subway Surfers, meanwhile, became the most-downloaded game of the decade, thanks to strong adoption in India.

To be clear, the analysis excludes third-party app stores in China, instead relying on iOS and Google Play data to come up with the list of top apps. But this still provides a way of examining worldwide app trends, despite that exception.

Making a good case for its monopoly status, Facebook didn’t just operate four of the most-downloaded (non-game) apps of the past 10 years — it runs the top four most-downloaded apps. In order, that’s Facebook, Messenger, WhatsApp and Instagram.

Right on Facebook’s heels is Snapchat as the No. 5 most-downloaded app of the 2010s — a big reason why Facebook was ready to spend billions earlier in the decade to bring the app under its roof.

Communication and social media apps were also among the most popular over the past 10 years, claiming seven out of the 10 top spots of the decade’s most-downloaded apps thanks to Skype at No. 6 and Twitter at No. 10. 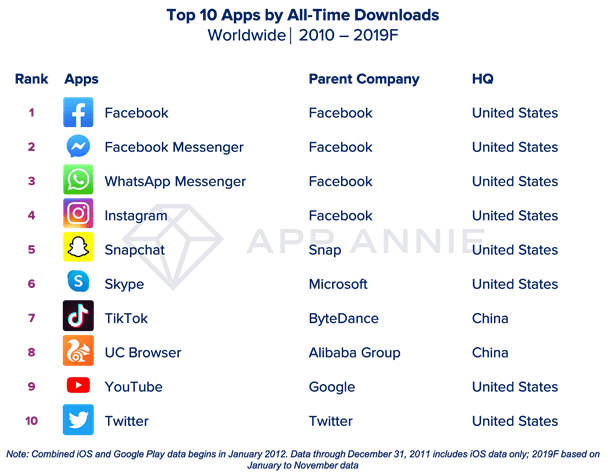 In terms of consumer spending, video streaming and music apps ruled the charts (outside of games), with top apps including Netflix (No. 1), Pandora Music (No. 3) and Tencent Video (No. 4) also in the top 5.

And though dating app Tinder was the most profitable app this year, Netflix was the No. 1 app by all-time consumer spend over the past decade.

The rest of the list included No. 4 LINE, followed by iQIYI, Spotify, YouTube, HBO NOW and Kwai. 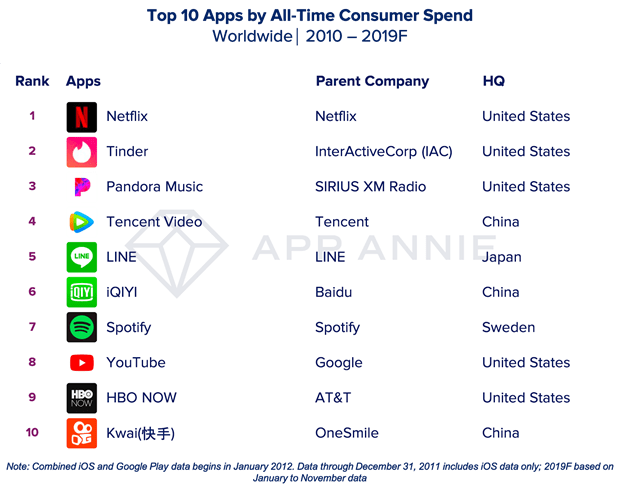 On the gaming side, however, Subway Surfers by Kiloo was the somewhat surprising top game of the decade, in terms of downloads. It can attribute its No. 1 spot to the demand from Indian users, as the country accounted for more than 15% of Subway Surfers’ all-time downloads across iOS and Google Play combined.

No one publisher dominated the charts, as a wide range of major gaming companies were represented.

The top games by consumer spending were almost an entirely different list.

Clash of Clans and Candy Crush Saga were the only two games to appear on both the top games by downloads and consumer spend lists, App Annie found.

Instead, the top games by consumer spending were led by Supercell’s Clash of Clans, followed by Monster Strike by mixi, then Candy Crush.

The rest of the list was rounded out by Puzzle & Dragons by GungHo Online Entertainment, Fate/Grand Order by Sony, Honour of Kings by Tencent, Fantasy Westward Journey by NetEase, Pokémon GO by Niantic, Game of War – Fire Age by MZ and Clash Royale by Supercell. 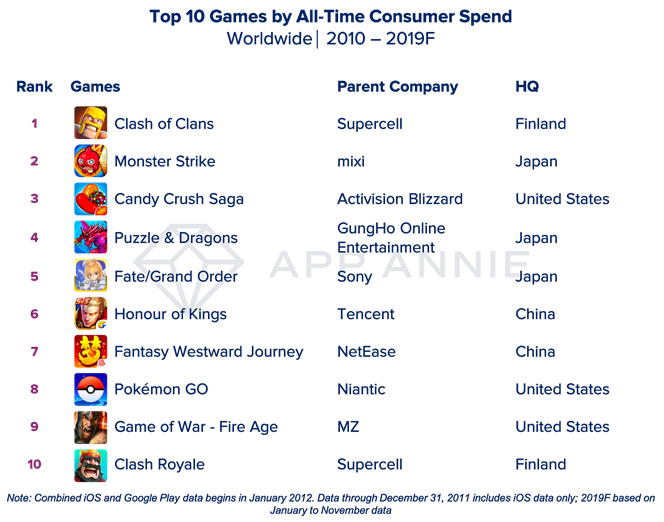 Many of the decade’s most-downloaded and most profitable apps and games have also appeared on the top apps list at the end of every year, but some of the apps are growing in popularity while others are waning.

For example, the most profitable game of the decade, Clash of Clans, was ranked No. 8 as opposed No. 1 on 2019’s list of the most profitable games. HBO NOW had a big showing in the 2010s thanks to its hit series, “Game of Thrones,” but didn’t make this year’s list at all now that the show has wrapped. And though Facebook ruled the 2010s, there are now signs that consumers may be ready for something new as short-form video apps TikTok and Likee moved onto 2019’s most-downloaded app list, as No. 4 and No. 7, respectively.