Today we’re digging into unicorns: how many will find an exit through an acquisition (selling themselves to a larger company) or an IPO (starting to trade as a public company) before the market turns?

When the business cycle does eventually turn ill, it’s generally expected that private capital will become scarcer, something that could harm yet-unprofitable unicorns. In turn, backers of private companies worth at least $1 billion could see the value of their investments decline or implode. The number of unicorns that manage to exit before a market turn is, therefore, something to keep an eye on.

This is doubly true as the number of un-exited unicorns continues to rise. Despite unicorn IPOs and acquisitions (more on that in a moment), the number of private companies worth $1 billion (unicorns that need an eventual exit to return capital to their backers who expect eventual, profitable liquidity) has risen each quarter for years now.

This has led to hundreds of unexited unicorns worth more than $1 trillion in total, according to the Crunchbase leaderboard. That’s a lot of corporate value to shift before the business cycle heads negative, possibly closing the IPO window and bringing winter to the sort of private finance that unicorns have long depended on.

In its most recent update for Q3 2019, the same dataset indicates that there are 400 unexited unicorns, 112 that have gone public and 50 that have been sold.

We can see, then, that the portion of unicorns that have managed to find an exit has improved over the last few years. Less encouraging, however, is that the raw number of unicorns still in hunt of an exit has grown by leaps and bounds. 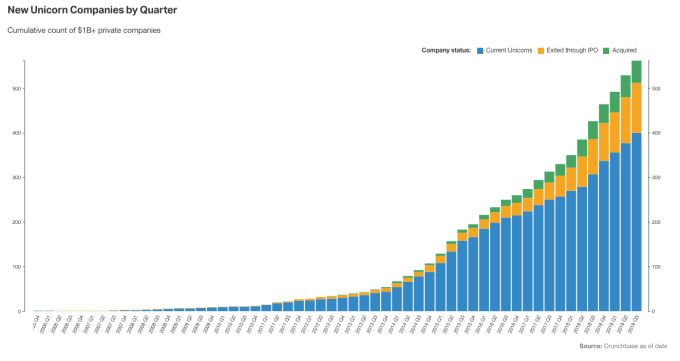