Seoul and South Korea may well be the secret startup hub that (still) no one talks about.

While often dwarfed by the scale and scope of the Chinese startup market next door, South Korea has proven over the last few years that it can — and will — enter the top-tier of startup hubs.

Case in point: Baedal Minjok (typically shortened to Baemin), one of the country’s leading food delivery apps, announced an acquisition offer by Berlin-based Delivery Hero in a blockbuster $4 billion transaction late this week, representing potentially one of the largest exits yet for the Korean startup world.

The transaction faces antitrust review before closing, since Delivery Hero owns Baemin’s largest competitor Yogiyo, and therefore is conditional on regulatory approval. Delivery Hero bought a majority stake in Yogiyo way back in 2014.

While the country remains dominated by its chaebol tech conglomerates — none more important than Samsung — it’s the country’s startup and culture industries that are driving dynamism in this economy. And with money flooding out of the country’s pension funds into the startup world (both locally and internationally), even more opportunities await entrepreneurs willing to slough off traditional big corporate career paths and take the startup route. 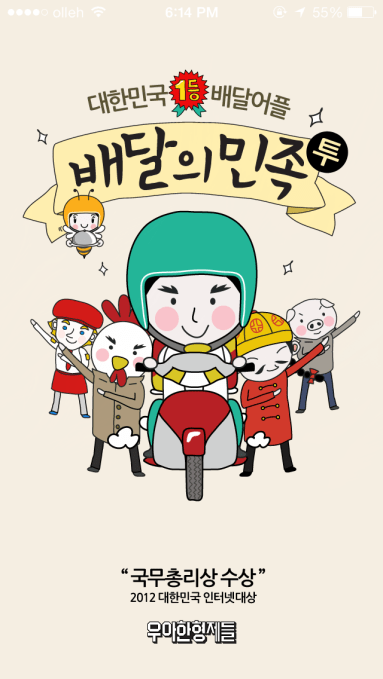 Baemin’s original branding was heavy on the illustrations.

Five years ago, Baemin was just an app for chicken delivery with a cutesy and creative interface facing criticism from restaurant franchise owners over fees. Now, its motorbikes are seen all over Seoul, and the company has installed speakers in many restaurants where a catchy whistle and the company’s name are announced every time there is an online delivery order.

(Last week when I was in Seoul, one restaurant seemingly received an order every 1-3 minutes with a “Baedal Minjok Order!” announcement that made eating a quite distracted experience. Amazing product marketing tactic though that I am surprised more U.S.-based food delivery startups haven’t copied yet).

The strengths of the ecosystem remain the same as they have always been. A huge workforce of smart graduates (Korea has one of the highest education rates in the world), plus a high youth unemployment and underemployment rate have driven more and more potential founders down the startup path rather than holding out for professional positions that may never materialize.

What has changed is venture capital funding. It wasn’t so long ago that Korea struggled to get any funding for its startups. Years ago, the government initiated a program to underwrite the creation of venture capital firms focused on the country’s entrepreneurs, simply because there was just no capital to get a startup underway (it was not uncommon among some deals I heard of at the time for a $100k seed check to buy almost a majority of a startup’s equity).

Now, Korea has become a startup target for many international funds, including Goldman Sachs and Sequoia. It has also been at the center of many of the developments of blockchain in recent years, with the massive funding boom and crash that market sustained. Altogether, the increased funding has led to a number of unicorn startups — a total of seven according to the The Crunchbase Unicorn Leaderboard.

And the country is just getting started – with a bunch of new startups looking poised to driven toward huge outcomes in the coming years.

Thus, there continues to be a unique opportunity for venture investors who are willing to cross the barriers here and engage. That said, there are challenges to overcome to make the most of the country’s past and future success.

Perhaps the hardest problem is simply getting insight on what is happening locally. While China attracts large contingents of foreign correspondents who cover everything from national security to the country’s startups and economy, Korea’s foreign media coverage basically entails coverage of the funny guy to the North and the occasional odd cultural note. Dedicated startup journalists do exist, but they are unfortunately few and far between and vastly under-resourced compared to the scale of the ecosystem.

Plus, similar to New York City, there are also just a number of different ecosystems that broadly don’t interact with each other. For Korea, it has startups that target the domestic market (which makes up the bulk of its existing unicorns), plus leading companies in industries as diverse as semiconductors, gaming, and music/entertainment. My experience is that these different verticals exist separately from each other not just socially, but also geographically as well, making it hard to combine talent and insights across different industries.

Yet ultimately, as valuations soar in the Valley and other prominent tech hubs, it is the next tier of startup cities that might well offer the best return profiles. For the early investors in Baemin, this was a week to celebrate, perhaps with some fried chicken delivery.