Google today released its annual “Year in Search” data that takes a look back at some of the most notable searches of 2019. Specifically, Google looked at the biggest trends — meaning, search terms that saw the largest spikes in traffic over a sustained period in 2019 compared to 2018. In the U.S., Disney’s new streaming service “Disney Plus” was the biggest search trend of 2019, followed by Cameron Boyce, Nipsey Hussle, Hurricane Dorian, Antonio Brown, Luke Perry, Avengers: Endgame, Game of Thrones, iPhone 11 and Jussie Smollet.

“Game of Thrones” was also the biggest U.S. TV show search trend of the year, followed by Netflix’s “Stranger Things” and “When They See Us,” then HBO’s “Chernobyl” and Disney Plus’s “The Mandalorian.” 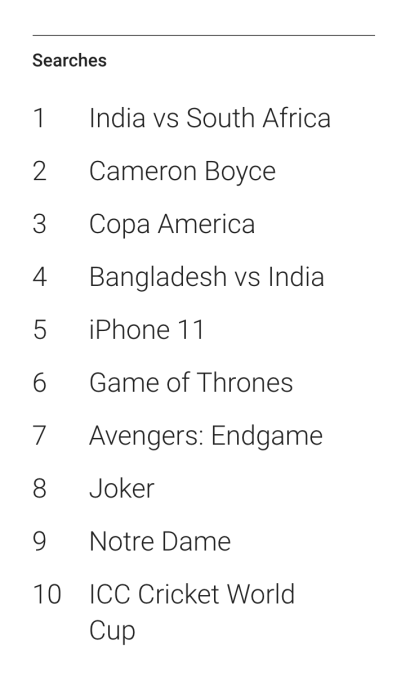 Tech companies’ influence on Google’s Top Trends could also be found in the music category, where “Old Town Road” was the top trending Song globally and in the U.S. in 2019. The Lil Nas X hit song went viral on TikTok this year after the rapper himself uploaded it to the platform back in December 2018.

In addition to topping Google’s list, Lil Nas X was also the No. 1 artist on TikTok, according to its own year-end round-up.

Elsewhere, online and tech-influenced trends could be found under the “What is…?” category in Google’s top U.S. search trends. For example, the meme “Storm Area 51,” which grew out of a viral Facebook joke that turned into a real-world event, led many this year to search “What is Area 51?”

No. 2 was “What is a VSCO girl?” referring to the latest teen trend and meme whose name comes from the hipper-than-Instagram photo-editing app, VSCO. The VSCO girl dresses in oversized tees, Birkenstocks, wears her hair in a messy bun and adorns herself with accessories like scrunchies, Burt’s Bees lip balm, puka shell chokers and carries around a Hydro Flask water bottle.

Also on the “What is…?” list were “momo,” as in the “Momo Challenge,” (an artistic sculpture turned viral hoax) and “What is a boomer?,” referencing the latest teen insult for old people, “OK boomer.” The latter also became a huge TikTok meme.

Various online cultures influenced Google’s top U.S. outfit trends, too, including the No. 1 outfit idea of Egirl, a popular demographic found on TikTok that’s a sort of emo subculture (or perhaps an emo-anime-goth variation), followed by Eboy, Soft girl (another TikTok subculture, this time with a hyper-cute aesthetic) and finally Biker shorts and VSCO girl. (If you don’t know which one you are, don’t worry — there’s a BuzzFeed quiz for that, of course.)

Google’s top trends are mainly a reflection of pop culture for the year. Google did take a longer look back this year with its “Decade in Search” retrospective, where it highlights the music, movies and people who influenced culture over the past 10 years.

The company put together a busy visualization of the decade in music through Year in Search, for example.

It also points to some of the people who trended over the course of the decade, including Justin Bieber, Betty White, Lebron James, as well as long-lasting TV and movie trends, including “Toy Story,” “Iron Man” and “The Walking Dead.”

The full list of Google’s Global Top Trends, which can be filtered by country, is here.