Childcare is one of the biggest expenses for American parents — and it’s not just families that are taking a hit. Childcare issues cost the United States’ economy an estimated $4.4 billion in lost productivity each year and also impacts employee retention rates. Kinside wants to help with a platform that not only enables families to get the most out of their family care benefits, but also find the right providers for their kids. The startup announced the public launch of its platform today, along with $3 million in a new funding round led by Initialized Capital.

This brings Kinside’s total raised since it was founded 18 months ago to $4 million. Its other investors include Haystack, Precursor Ventures, Kairos, Jane VC and Escondido Ventures.

Founded by Shadiah Sigala, Brittney Barrett and Abe Han, Kinside began its private beta with 10 clients while participating in Y Combinator last summer. Over the past year, it has signed up more than 1,000 employers, underscoring the demand for childcare benefits.

“Getting meetings with employers has not been the hard part,” Sigala, Kinside’s CEO, tells TechCrunch. “Any subject line that says ‘do you want childcare for your employees?’ immediately gets a response. We hit a nerve there and when we talked with them, we found that the biggest pain they expressed was that their employees were having a hard time finding childcare.” 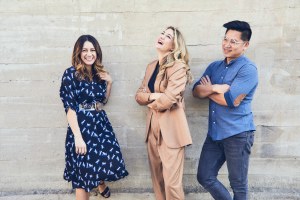 The U.S. is the only industrialized country without a national law that guarantees paid parental leave. Companies like Microsoft, Netflix and Deloitte offer strong family benefits in order to recruit and retain talent, but offering similar packages remains a challenge, especially for small to medium-sized businesses. As a result, many employees, especially women, leave their jobs to care for their children, even if they had planned to continue working.

“The worst case for bigger, more mature companies is a delayed return to work, which has a real impact on the bottom line because of lost productivity, but the deeper pain is when we lose the women,” Sigala says. “It’s documented that 43% of women in the professional sector will leave the workforce within one to two years of having a baby.”

Before Kinside, Sigala co-founded Honeybook, a business management platform for small businesses and freelancers. When she got pregnant, Sigala began developing the company’s family benefit policies and became familiar with the hurdles small companies face.

While in Y Combinator, Kinside focused on streamlining the process of using dependent care flexible spending accounts (FSA), or pre-tax benefits, for caregiving costs, after its founders saw that the complicated claims process meant only a fraction of eligible parents get full use of the program. Kinside still helps parents with their accounts by partnering with FSA administrators. Now their app also includes a network of pre-screened early childcare providers, ranging from home-based daycares to large preschools across the country.

The startup pre-negotiates reserved spots and discounted rates for its users and gives them access to a “concierge” made up of childcare professionals to answer questions. Parents can search for providers based on location, cost and childcare philosophy. Sigala says the startup’s team found that many childcare providers have a 20% to 30% vacancy rate, which Kinside addresses by helping them manage openings and find families who are willing to commit to a spot. In addition to its app, Kinside also plans to integrate into human resources systems.

Initialized was co-founded by Alexis Ohanian, also a founder of Reddit, and a vocal advocate of paid parental leave. One of the areas the firm focuses on is “family tech,” and its portfolio also includes startups like the Mom Project, a job search platform for mothers returning to work.

In an email, Initialized partner Alda Leu Dennis said the firm invested in Kinside because “we have this fundamental problem of gender inequality which can be partially attributed to imbalances in the workplace and at home. We have a gender wage gap and domestic responsibilities, still, largely falling on the mother. By solving a problem that men and women have—access to affordable and high-quality childcare—we can improve this situation.”

Dennis added, “the business model innovation that Kinside brings to the table is to involve employers in the process of bringing peace of mind and stability to their employees’ home lives and in turn making their employees more productive.”

Sigala says Kinside sees itself as part of the benefits equity movement, including paid parental leave and, eventually, universal childcare for all working parents. The platform’s users are split equally between men and women, highlighting that the need for caregiving benefits cross gender lines and impact an entire household.

“It’s a complex issue. Our infrastructure and society is still designed for single breadwinner households and yet the economy means that for most households, being able to pay the bills depends on having two parents working,” she adds. “I see this as a movement. It’s the right time.”