Spotify’s annual “Wrapped” feature, which allows listeners to look back on their favorite music from the year, is expanding in 2019 to include a whole decade’s worth of favorite tunes, the company announced today. In addition, the feature is for the first time being made available to podcasters, in addition to Spotify users and Spotify artists.

“Wrapped” has become one of Spotify’s more anticipated releases among those who use the service regularly, as it allows users to explore their own top songs, top artists, top genres and minutes listened for the year. Many users also like to share their “Wrapped” findings on social media, like Facebook, Instagram, Twitter and Snapchat.

As 2019 draws to a close, Spotify is offering its annual version of the personalized “Spotify Wrapped,” as well as a new one that showcases your listening history through the last decade. That means your Wrapped will include the songs, artists, albums and podcasts you discovered on Spotify in 2019, plus the artists you streamed over the past decade, through a “My Decade Wrapped” option.

Notably, Spotify’s chief rival Apple Music last month launched its own multi-year retrospective, with “Replay,” a personalized playlist of your top songs by year. Replay is very much like Wrapped, except that it includes playlists for every year you’ve subscribed to Apple Music, retroactively. 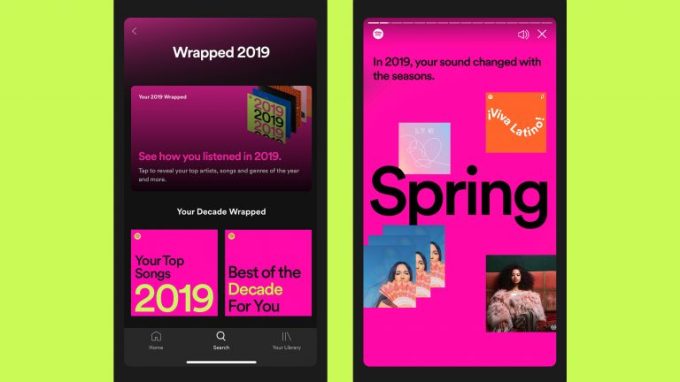 Spotify’s launch of “My Decade Wrapped” is clearly meant to be a competitive offering.

This year, the feature is for the first time being integrated directly in the Spotify app, in addition to being available on the web at spotify.com/wrapped, as before. It’s also now highlighting how global users’ listening habits are, by showing your top artists on a world map. 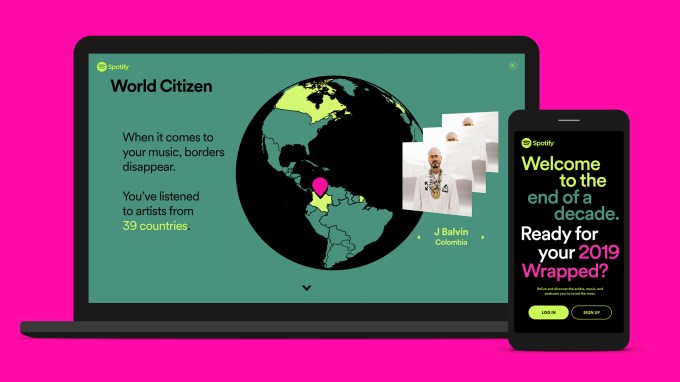 Spotify Premium subscribers, meanwhile, will have access to more personalized data stories and insights, including things like the numbers of artists discovered and the top artist they discovered. Besides being a fun point of reference for Spotify users, this sort of data can help reinforce the company’s brand message — that Spotify is more than just another streaming music app. It aims to demonstrate that it can actually help users discover new music, not just offer them an easy way to play the songs and artists they already know.

The final product, including now both the “2019 Wrapped” and “My Decade Wrapped,” can be posted to social media with the provided share card that summarizes your top tracks, artists and listening history. 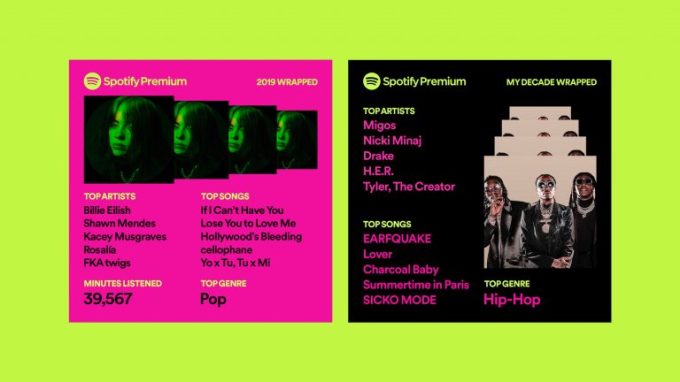 Also new this year is an expansion of “Wrapped” to podcasters.

Already, Spotify artists had their own version of “Wrapped,” which allowed them to discover how their music reached fans around the world, available through the Spotify for Artists dashboard. This year, podcasters will get their own “Wrapped,” accessible through Spotify for Podcasters.

This feature will allow podcasters and their team to look back at their show and audience’s growth over the past year, and easily see which were the top episodes. They also can see their year over year gains in followers, their top country for audience growth, number of fans who have the show as their top podcast, the four related podcasts their fans also listen to and more. Essentially, it’s a new way of packaging up analytics that podcasters already access, but looking back at the full year.

Podcasts have been of increased importance to Spotify, and the company has made several investments in this space over the year, including the acquisitions of Gimlet, Anchor and Parcast, and a number of exclusive deals with podcasters. As a result, Spotify says podcast consumption doubled on the platform in 2019 and the platform saw a 39% increase in podcast consumption in the last quarter alone. Today, there are more than 500,000 podcasts on Spotify, across more than 75 countries and territories, the company says.