Pandora’s redesigned mobile app experience is today available to all users, following a limited rollout that began in October. The update expands on Pandora’s personalization capabilities with the addition of a new “For You” tab offering an entirely unique experience for each Pandora user, along with more station customization features, and other changes. Pandora hopes the features will help it better compete with rivals like Spotify and Apple Music in the months ahead.

Personalization has become a key selling point for today’s streaming music services. And though Pandora led in this area in years past thanks to its Music Genome, thumbs up and down signaling buttons and its personalized stations, it has since ceded ground to Spotify, whose bevy of algorithmically updated playlists, led by Discover Weekly, have addicted users to its service.

This revamped Pandora app is a way for the now SiriusXM-owned company to fight back by highlighting what it does have that others don’t.

For example, the new “For You” tab gives Pandora a place to showcase its exclusive content, like its music-and-podcast combos, called “Pandora Stories,” and its dozens of SiriusXM talk shows that became Pandora podcasts following the company’s acquisition.

Pandora also recently announced a multi-year deal with Marvel to create a “substantial number” of exclusive podcasts for its service, both scripted and unscripted, along with live events and more. And it will run many of Marvel’s podcasts before they can be heard elsewhere. These, too, will be featured in the new “For You” tab.

The tab also gives Pandora a way to puts more of the focus on its unique personalization capabilities, which allow users to listen to music by genre, mood, activity, trending, new releases and more.

The update brings the “Pandora Modes” feature to mobile, as well, following its launch on the web earlier in the year. This lets users customize Pandora Stations by tweaking them to play just the most popular songs (“crowd faves”), the deep cuts, the new releases, artist-only tracks — or you can put the station into a “discovery” mode to be introduced to more artists you may like. 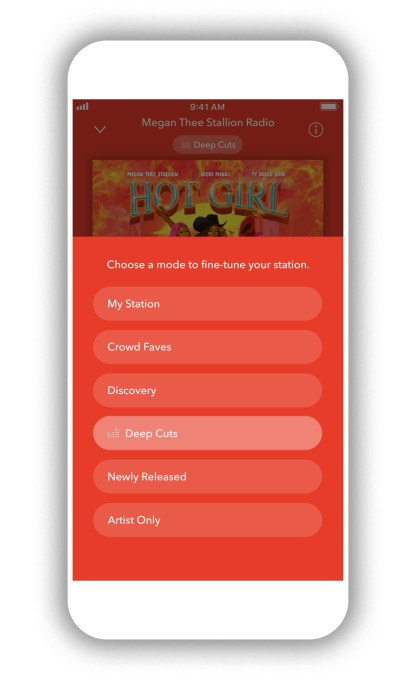 Pandora says that already more than double the number of users are engaging with “For You” versus the traditional “Browse” experience the tab replaces, following the October launch. In addition, those users are engaging with the personalized content they find in “For You” three times more than the content they find through traditional browsing. Presuming these metrics hold up as “For You” launches broadly, it could give Pandora’s app a competitive advantage — something the company needs as its user numbers and listening hours fall.

Pandora closed Q3 with 63.1 million monthly active users, down from 68.8 million the year prior. Its active users were also down on a quarterly basis, from 64.9 million at the end of Q2. Meanwhile, listening hours were down from 3.59 billion in Q3 last year to 3.32 billion in Q3 2019. Gross profit, however, grew 7% year-over-year to reach $970 million.

The company plans to kick off a new brand campaign starting today to showcase its new visual identity and tagline, “life is better with sound.” The ads will feature artists like Taylor Swift, Dua Lipa, Lizzo, H.E.R., Maren Morris, Normani, Tones and I, Halsey, Little Simz, Post Malone, Snoh Aalegra, and others. Pandora will also host experiential events related to this, including a live-streamed Halsey concert in New York’s Times Square and a larger concert still to come.

“This campaign is all about showing our listeners that Pandora is still the service they know and love, but it looks and feels a whole lot different — a whole lot better. The product is at the center, and we are highlighting the personalized, on-demand content Pandora users want, but may not know we have,” said Brad Minor, VP of Brand Marketing, Creative, & Communications at Pandora. “We’re celebrating our listeners in their everyday lives and demonstrating how Pandora has the unique ability to transform each moment by adding the exact right soundtrack at the exact right time,” Minor added.

The “For You” tab and other features are rolling out to all users at all tiers of Pandora’s service, including its free ad-supported option, Pandora Plus and Pandora Premium.