Carbon dioxide emissions, one of the main contributors to the climate changes bringing extreme weather, rising oceans and more frequent fires that have killed hundreds of Americans and cost the U.S. billions of dollars, are set to reach another record high in 2019.

That’s the word from the Global Carbon Project, an initiative of researchers around the world led by Stanford University scientist Rob Jackson.

Weather and climate-related disasters cost the US $80 billion in 2018, but go ahead and say climate change isn’t real

The new projections from the Global Carbon Project are set out in a trio of papers published in “Earth System Science Data,” “Environmental Research Letters” and “Nature Climate Change.”

That’s the bad news. The good news (if you want to take a glass half-full view) is that the rate of growth has slowed dramatically from the previous two years. However, researchers are warning that emissions could keep increasing for another decade unless nations around the globe take dramatic action to change their approach to energy, transportation and industry, according to a statement from Jackson.

“When the good news is that emissions growth is slower than last year, we need help,” said Jackson, a professor of Earth system science in Stanford’s School of Earth, Energy & Environmental Sciences (Stanford Earth), in a statement. “When will emissions start to drop?”

This news is shockingly important and heartbreakingly serious. Not only are we entirely failing to reduce emissions, we are making the climate emergency worse at an increasingly fast rate. pic.twitter.com/A2nasPT3lI

Even as the use of coal is in drastic decline around the world, natural gas and oil use is climbing, according to researchers, and stubbornly high per capita emissions in affluent countries mean that reductions won’t be enough to offset the emissions from developing countries as they turn to natural gas and gasoline for their energy and transportation needs.

“Emissions cuts in wealthier nations must outpace increases in poorer countries where access to energy is still needed,” said Pierre Friedlingstein, a mathematics professor at the University of Exeter and lead author of the Global Carbon Budget paper in “Earth System Science Data,” in a statement.

Some countries are making progress. Both the U.K. and Denmark have managed to achieve economic growth while simultaneously reducing their carbon emissions. In the third quarter of the year, renewable power supplied more energy to homes and businesses in the United Kingdom than fossil fuels for the first time in the nation’s history, according to a report cited by “The Economist.” 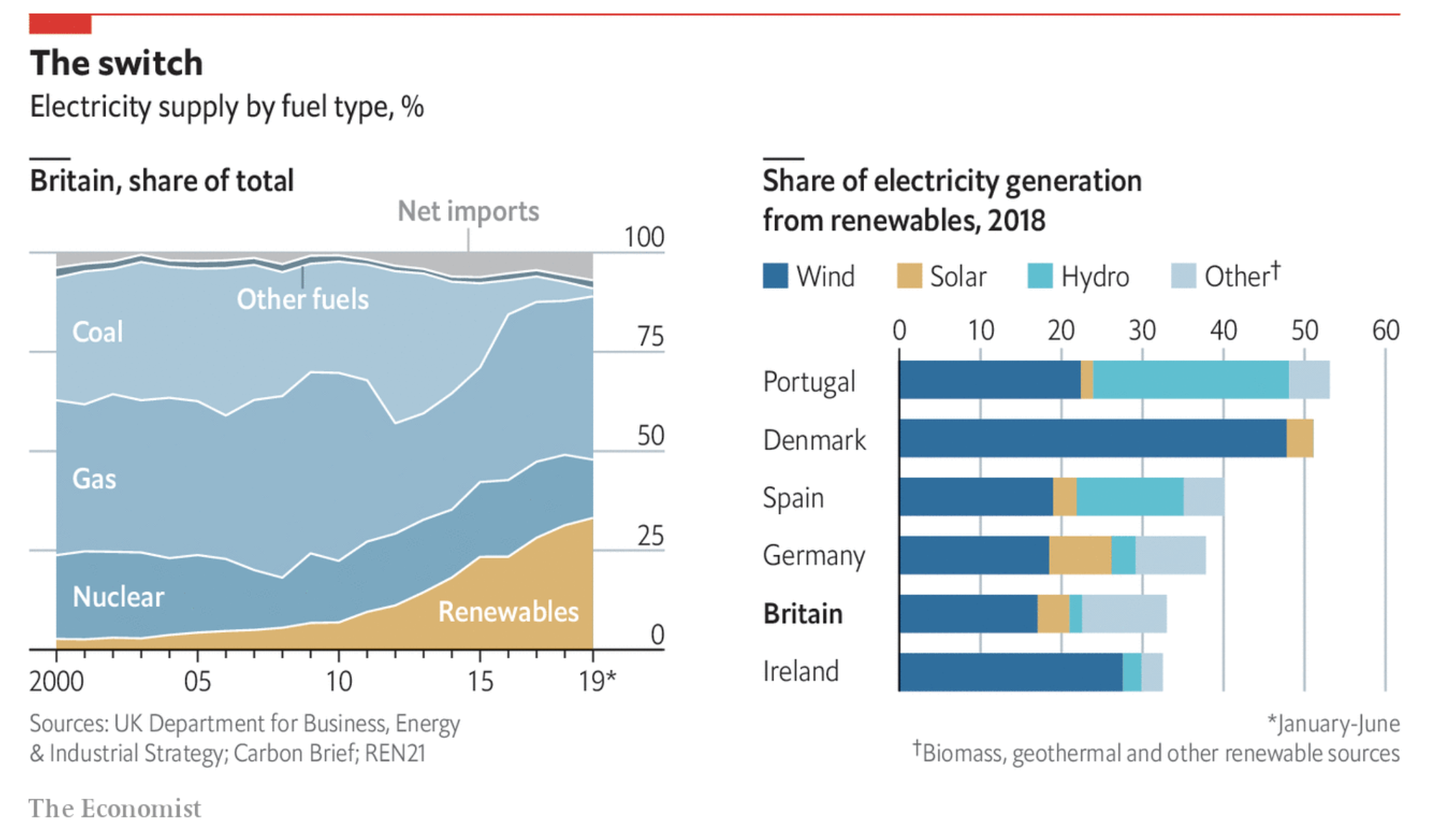 Data and image from The Economist

Costs of wind and solar power are declining so dramatically that they are cost-competitive with natural gas in many parts of the wealthy world and cheaper than coal, according to a study earlier in the year from the International Monetary Fund.

And the U.S. has yet to find a way to wean itself off of its addiction to cheap gasoline and big cars. It hasn’t helped that the country is throwing out emissions requirements for passenger vehicles that would have helped to reduce its contribution to climate change even further. Even so, at current ownership rates, there’s a need to radically reinvent transportation given what U.S. car ownership rates mean for the world.

U.S. oil consumption per person is 16 times greater than in India and six times greater than in China, according to the reports. And the United States has roughly one car per person while those numbers are roughly one for every 40 people in India and one for every six in China. If ownership rates in either country were to rise to similar levels as the U.S., that would put 1 billion cars on the road in either country.

About 40% of global carbon dioxide emissions were attributable to coal use, 34% from oil, 20% from natural gas, and the remaining 6% from cement production and other sources, according to a Stanford University statement on the Global Carbon Project report.

“Declining coal use in the U.S. and Europe is reducing emissions, creating jobs and saving lives through cleaner air,” said Jackson, who is also a senior fellow at the Stanford Woods Institute for the Environment and the Precourt Institute for Energy, in a statement. “More consumers are demanding cheaper alternatives such as solar and wind power.”

There’s hope that a combination of policy, technology and changing social habits can still work to reverse course. The adoption of new low-emission vehicles, the development of new energy storage technologies, continued advancements in energy efficiency and renewable power generation in a variety of new applications holds some promise. As does the social adoption of alternatives to emissions-intensive animal farming and crop cultivation.

Reasons to be climate cheerful (ish)

“We need every arrow in our climate quiver,” Jackson said, in a statement. “That means stricter fuel efficiency standards, stronger policy incentives for renewables, even dietary changes and carbon capture and storage technologies.”