Facebook is expanding Crisis Response, its disaster-reporting and communications feature that’s been used in 300 crises in more than 80 countries. The company today is announcing several new features, including WhatsApp integration, support for first-hand information sharing and an expansion of its “Data for Good” tools for things like better disaster and displacement maps.

Crisis Response originally grew out of a handful of features that help family, friends and communities support one another in the wake of a disaster. A couple of years ago, Facebook organized these tools — like Safety Check, Community Help and Fundraisers — all under a centralized “Crisis Response” centralized hub.

Today, Facebook is adding new functionality to Crisis Response which will allow people in affected areas to share first-hand information about what they’re witnessing or think others should know — like building collapses or road closures, for example. This is in addition to their existing ability to share requests or offers for help, as before.

In addition, Facebook Crisis Response now works with WhatsApp. This particular integration is fairly light — the entire feature set isn’t coming to WhatsApp, to be clear. But people can now offer or request help through the messaging app, instead of using just Facebook Messenger. 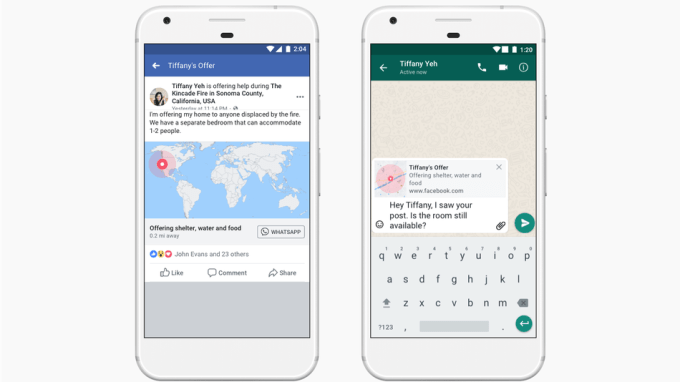 Facebook’s “Data for Good” tools are also being updated and expanded. Via partnerships with more than 100 organizations, Facebook provides disaster maps and relief organizations with information about where to distribute supplies, based on aggregated, anonymized data.

With the updates, Facebook says it’s now able to deliver these updates to state and local officials, as well as federal relief agencies, thanks to partnerships with organizations like Direct Relief and the National Alliance for Public Safety GIS (NAPSG) Foundation.

The company is also improving its disaster maps, following its work with experts on the topic of displacement, like the International Displacement Monitoring Centre. The maps have been corrected for things like commute patterns and tourist populations, Facebook says.

The new features are rolling out now.