Europe bucked global smartphone stagnation in the third quarter, marking an 8% year over year growth in device shipments. That number, provided by Canalys, puts the region at the top of smartphone growth figures, beating out Asia/Pacific’s six percent.

Once again, Samsung was the biggest winner here. The Korean manufacturer saw a healthy 26%, year over year growth. As noted back in Q2, Samsung’s growth comes as the company floods the market with a variety of different devices. Its mid-tier A Series accounted for all four of its top spots during that time period.

Huawei held steady in second place, as the company refocuses on Europe amid US/China trade tensions. Huawei accounted for 22.2 % of units shipped, versus Samsung’s 35.7%. Fellow Chinese manufacturer Xiaomi saw an extremely healthy boost for the quarter, jumping 73 percent for the year, to nab fourth place behind Apple. 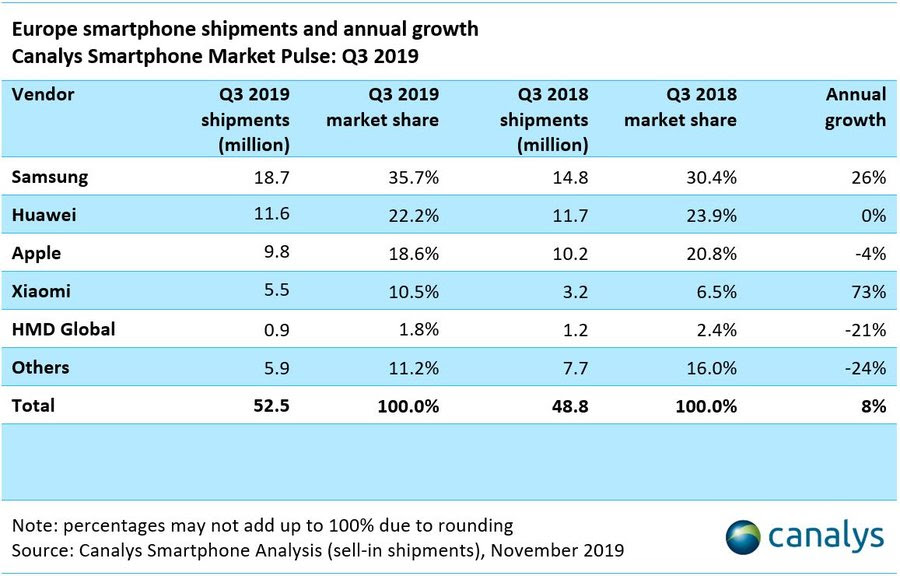 While the numbers are positive in the face of larger negative trends, politics are still having a marked impact on figures.

“On the negative side, Brexit has already had an impact,” analyst Ben Stanton said in a release. “In the UK, shipments of premium devices from Samsung and Apple accelerated before each Brexit deadline this year, in March and recently October, followed by a large dip, as distributors were forced to stockpile product and hedge against impending tariff risk. This shot-term artificial boost distorts the market and the accompanying risk, costs and uncertainty, is a drain on the industry.”

Like much of the rest of the world, the European market is looking forward to a 5G rollout to help further juice shipments moving forward.