PayPal announced today it has agreed to acquire Honey Science Corporation, the makers of a deal-finding browser add-on and mobile application, for $4 billion, mostly cash. The acquisition, which is PayPal’s largest to date, will give the payments giant a foothold earlier in the customer’s shopping journey. Instead of only competing on the checkout page against credit cards or Apple Pay, for example, PayPal will leap ahead to become a part of the deal discovery process, as well.

PayPal aims to add Honey’s technology to its own product line, expanding its reach to PayPal’s 300 million users.

“What’s exciting is that we can take the functionality Honey now offers — which is product discovery, price tracking, offers and loyalty — and build that into the PayPal and Venmo experiences,” explains PayPal SVP of Global Consumer Products and Technology, and former Xoom CEO, John Kunze. “When Honey says they’re putting money in the pockets of their customers — that’s perfectly in line with what we want to do. We want to make digital commerce and financial services more affordable, easier to use, more fun and more accessible to people around the world,” he says.

In addition, PayPal’s network of 24 million merchant partners will gain the ability to offer targeted and more personalized promotions to consumers as a means of acquiring new business and driving increased sales. PayPal Credit may also be integrated into Honey to help finance larger purchases. 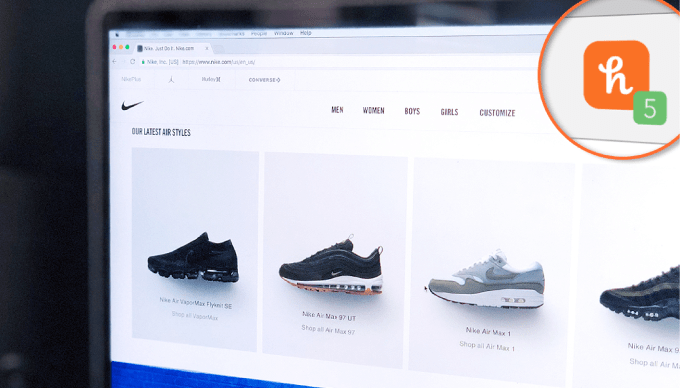 Honey has flown under the radar to some extent since its founding in 2012.

Originally only a web browser extension, Honey tracks sales and retailers’ promo codes, as a rival to RetailMeNot and others. What makes the extension so useful is that it automatically tries all the eligible promo codes for you during checkout then selects the one that provided the most savings and applies it on your behalf. This helps shoppers feel more comfortable with their purchases and reduces shopping cart abandonment.

The company also rolled out features to inform shoppers of an item’s price history, including the historical pricing of any product on Amazon’s marketplace. In 2017, Honey launched DropList, which would track and alert users to lower prices, as well as tools for finding travel deals. 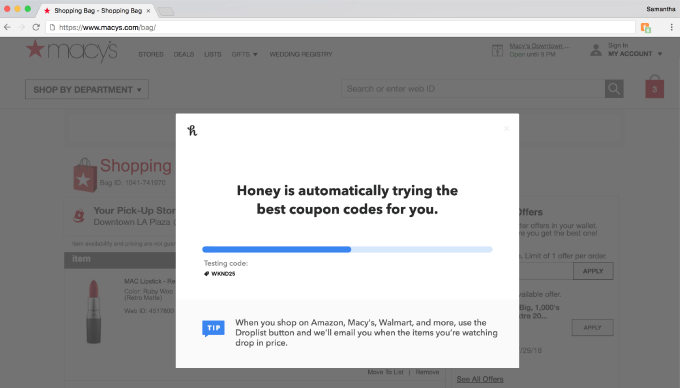 Its browser extension now works across approximately 30,000 merchant websites, including fashion, technology, travel and even pizza delivery. Last year, Honey publicly shared that its 10 million members had saved over $800 million using its tools. As of today, Honey’s 17 million members have saved more than $2 billion to date. 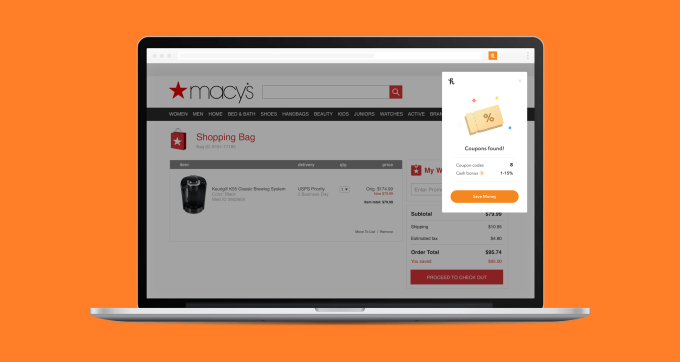 “Honey is amongst the most transformative acquisitions in PayPal’s history. It provides a broad portfolio of services to simplify the consumer shopping experience, while at the same time making it more affordable and rewarding,” said Dan Schulman, president and CEO of PayPal, in a statement.

“The combination of Honey’s complementary consumer products with our platform will significantly enhance our ability to drive engagement and play a more meaningful role in the daily lives of our consumers. As a partner of choice for our merchants, this is another way that we can help them build and strengthen their customer relationships, provide personalized offers, and drive incremental sales. The combination of Honey and PayPal adds another significant and meaningful dimension to our two-sided platform,” Schulman added. 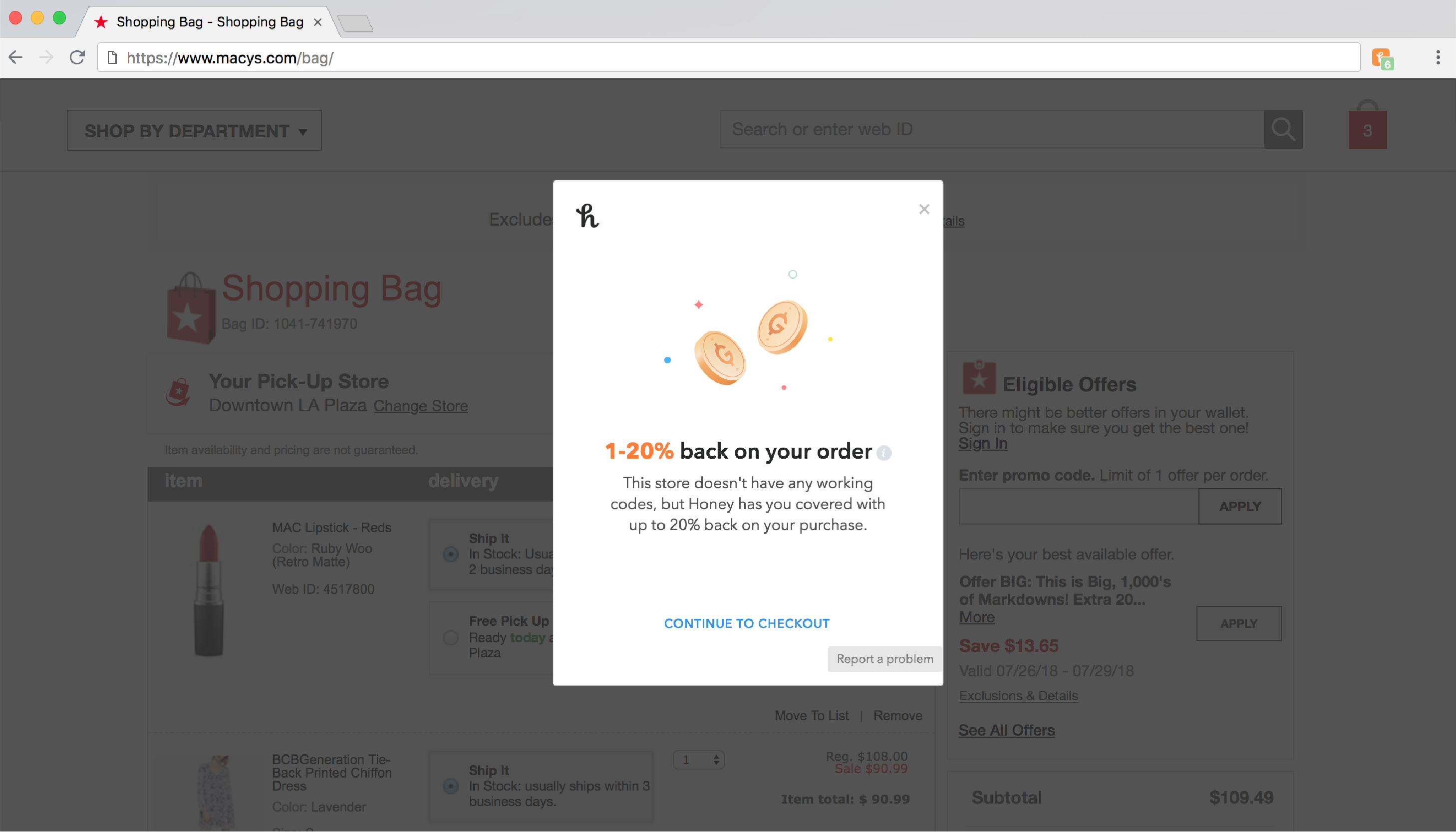 The acquisition also gives PayPal a way to fight back against the increased competition from Apple, Google, Facebook and other tech companies that have entered the payments market in recent years. On Apple’s Q4 2019 earnings call, for example, CEO Tim Cook noted that Apple Pay has now exceeded PayPal transaction volume with 3 billion transactions in the quarter. Meanwhile, analysts are predicting Facebook Pay has the potential to unseat both Apple Pay and PayPal alike.

Then there are PayPal’s original rivals — the world’s biggest card networks like Visa, Mastercard, American Express and Discover. These companies are also fighting to remain relevant online, with a new PayPal competitor of their own to simplify online checkout.

With Honey, PayPal immediately shifts the battle away from the checkout page itself to instead compete against all the places people go to discover, browse, get inspired and deal-hunt — whether that’s directly on retailers’ sites or through newer platforms, like Pinterest or Instagram Shopping. 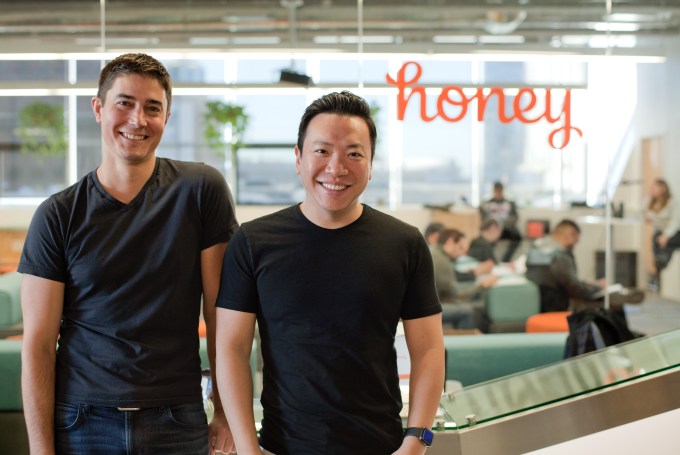 As a result of the acquisition, Honey co-founders George Ruan and Ryan Hudson will join PayPal where they’ll work on product integrations and scaling the technology to a much larger user base. Also joining is Honey’s predominantly L.A.-based team of 350 employees.

The Honey team and headquarters will remain in L.A., where they’ve just signed a lease on a new office space with expansion goals in mind.

“Combining PayPal’s assets and reach with our technology, we can build powerful new online shopping experiences for consumers and merchants,” said Hudson. “We’ll have the ability to help millions of retailers efficiently reach consumers with offers that deliver more and more value to Honey members.”

Honey was already profitable on a net income basis in 2018, PayPal notes. The acquisition is expected to close in the first quarter of 2020, subject to regulatory approval. It’s expected to be accretive to PayPal’s non-GAAP earnings per share in 2021.

PayPal will hold a conference call at 2 PM PST today to discuss the transaction further.