Google Earth is making a significant change to its product, with the addition of content creation tools that allow anyone to create maps and stories for its platform. The feature is an expansion of the Voyager program, launched in 2017, which then introduced guided tours from top storytellers, scientists, and nonprofits, like BBC Earth, Jane Goodall, Sesame Street, and NASA.

Those tours combined text and imagery, including Street View and 360-degree videos, to immerse viewers in habitats around the world, where they could explore and learn.

The new content creation tools offer similar capabilities, including the ability to select from Street View photos and 3D views of the earth when telling your story. You can also add placemarks, lines, shapes, photos, and videos, and write the text in a rich text editor, create title screens for slides for fullscreen presentations, and more.

The resulting stories can be organized into narratives that will fly users from place to place as they watch the presentation. The tools also support collaboration and the final stories can be shared with others by way of a Google Drive integration. This could allow a group of educators, for example, to work together to build out tours that complemented their lesson plans. 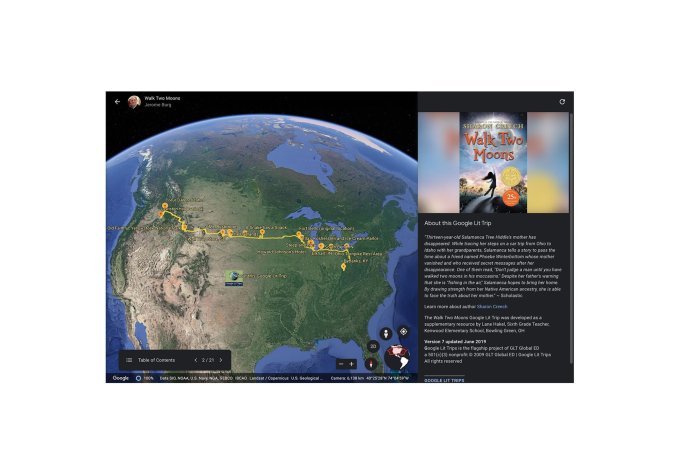 Early adopters have used these creation tools to build maps that show a river under threat, an Antarctic expedition, or offer a 3D tour of Renaissance architecture in Italy, among other things. An educational nonprofit also used the feature to showcase the stops characters made in the Young Adult novel, Walk Two Moons.

There’s a clear use case here for education, as the tools let teachers to build stories to bring their lessons to life and give students a close-up look at the places they’re learning about. But some may choose to use the tools for things of a more personal nature, like travel inspiration or bucket list-making, for example.

When Google launched its Voyager platform in 2017, it also modernized Google Earth for modern web browsers, meaning it can now run as a web app in Google Chrome.

This all ties into Google’s larger push for Chromebooks in the classroom — an area where it also competes against Apple and Microsoft.

That battle is fairly heated, as well. Apple’s marketing SVP Phil Schiller even slammed Google’s Chromebooks this week says they’re “cheap” and won’t succeed. However, low-cost Chromebooks have been winning so far. According to estimates, 60% of all laptops and tablets purchased for U.S. K-12 classrooms were Chromebooks, and only 18% were Apple products, CNBC reported.

With Google Earth creation tools that tie into Google Drive, Google has added another competitive advantage for its own products. But whether teachers will actually adopt the tools at scale remains to be seen. Many professionally created tours are already available, after all, through Voyager. And while the creation is easy enough, it’s also time-consuming to find the right photos and videos, to add places and write text.

One concern is that by opening up creation tools to the crowd, Google Earth could be inviting spam and other inappropriate content to show up on a platform often used in classroom settings by children. Google says it has built automated detection systems, including machine learning models, that can help it find and remove policy-violating content, however.

It also enables users to flag any such content so it can conduct manual reviews review and take action. And the user attribution is prominently displayed on the content, so everyone can see the author information. Repeated violations could see the user banned from further content creation.

The creation tools are now available in the Google Earth web app, and the projects can be viewed on mobile and tablet devices using the Google Earth mobile app for iOS and Android, says Google.