Last Monday a group of millionaires and billionaires took a trip to an industrial site in Lancaster, Calif. to witness the achievement of what could represent a giant leap forward in the effort to decarbonize some of the world’s most carbon intensive industries.

For Bill Gross, the founder of Idealab and brains behind the excursion, the unveiling was simply the latest in a string of demonstrations for new technologies commercialized by his nearly three-decade old startup company incubator. However, it may be the most significant.

What Gross is pursuing with his new company, Heliogen, offers a way forward for renewable energy to be applied to manufacturing processes for cement, lime, coke, and steel — some of the most energy intensive and polluting industries that exist in the world today.

“Today, industrial processes like those used to make cement, steel, and other materials are responsible for more than a fifth of all emissions,” said Bill Gates, a Heliogen backer who has committed millions of dollars to the development of new renewable energy technologies. “These materials are everywhere in our lives but we don’t have any proven breakthroughs that will give us affordable, zero-carbon versions of them. If we’re going to get to zero carbon emissions overall, we have a lot of inventing to do. I’m pleased to have been an early backer of Bill Gross’s novel solar concentration technology. Its capacity to achieve the high temperatures required for these processes is a promising development in the quest to one day replace fossil fuel.”

According to Gross, Kittu Kolluri*, an investor in Heliogen who is also backing another of Idealab’s incubated companies working on developing an energy storage technology, Energy Vault, said after seeing the demonstration, “Bill… this is even bigger.”

At its core, Heliogen is taking a well-known technology called concentrated solar power, and improving its ability to generate heat with new computer vision, sensing and control technologies, says Gross.

Four high resolution cameras capture real time video of a field of mirrors that are controlled by sensors to focus the sun’s energy on a particular spot. That spot, either at a transmission pipe used to transport gas, or a tower, is heated to over 1,000 degrees Celsius. Previous commercial concentrating solar thermal systems could only reach temperatures of 565 degrees Celsius, the company said. That’s useful for generating power, but can’t meet the needs of industrial processes.

Achieving temperatures above 1,000 degrees Celsius gives manufacturing facilities the opportunity to replace the use of fossil fuels in a significant portion of their operations. 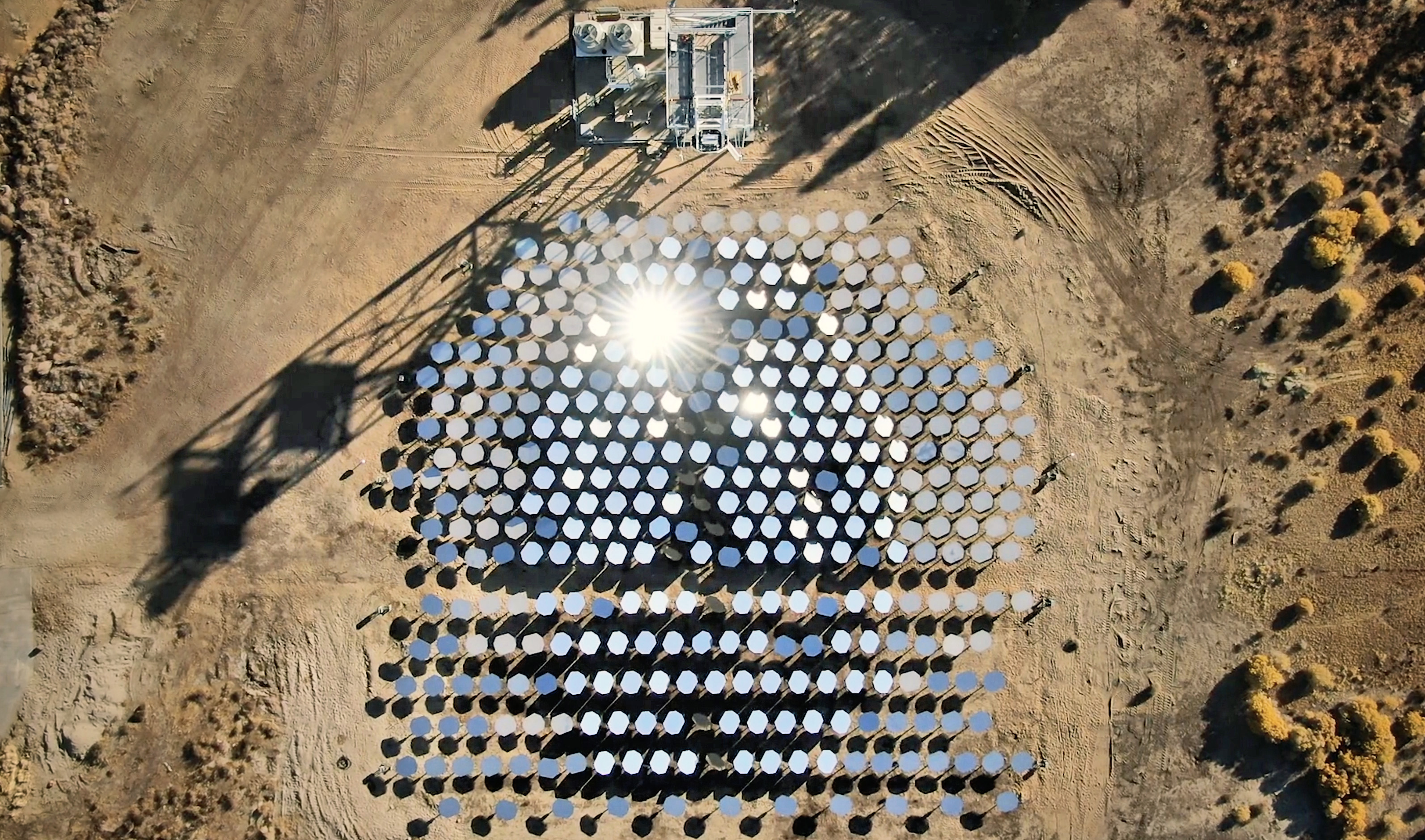 “They already have a power source/burner that is variable, based on the flow rate of materials, and is servo controlled to have the correct air flow exit temperature,” says Gross of many existing industrial operations. “So when we add heat (when the sun is out) the fossil fuel burner just automatically gets scaled back like a thermostat on a room heater (albeit at much higher temperature).  So it’s a seamless control integration.”

A plant could still operate on a 24-hour production schedule, and could still use fossil fuels, says Gross. But by deploying the Heliogen system, companies could reduce their fossil fuel consumption by up to 60%, according to the serial entrepreneur and investor. Gross believes that Heliogen’s systems will pay for themselves in a two-to-three year timeframe if companies buy the system outright, or Heliogen could manage the installation for a manufacturer and just charge them for the cost of the power.

Gross has been testing smaller versions of Heliogen’s industrial heating technology at a field with an array of 70 mirrors to prove that the super-concentrating technology could work. A full scale facility covers roughly two acres of land with mirrors and a tower where the rays are concentrated. “It’s like a death ray,” Gross said of the concentrated solar beams.

While initial applications for Heliogen’s technology will concentrate on industrial applications, longer term, Gross sees an opportunity to drive down the cost of Hydrogen production at an industrial scale. Long believed to be one of the keys to global decarbonization, Hydrogen’s use as a fuel source has been limited because it’s difficult to make without using fossil fuels.

“As we move closer to 100% clean electricity grids, it will be necessary to not just store excess electricity production from the spring and fall, but to turn all of this excess electricity to valuable commodities that can help decarbonize other sectors outside of electricity — transportation, industrial heat, and chemicals,” Shah wrote in an article on LinkedIn. “That’s where hydrogen comes into play.”

Investors in Heliogen include venture capital firm Neotribe and Dr. Patrick Soon-Shiong, the billionaire Los Angeles-based investor and entrepreneur, who owns the Los Angeles Times and an investment conglomerate. THe investmente was made through Dr. Soon-Shiong’s investment firm, Nant Capital.

“For the sake of our future generations we must address the existential danger of climate change with an extreme sense of urgency,” said Dr. Soon-Shiong, in a statement. “I am committed to using my resources to invest in innovative technologies that harness the power of nature and the sun. By significantly reducing greenhouse gas emissions and generating a pure source of energy, Heliogen’s brilliant technology will help us achieve this mission and also meaningfully improve the world we leave our children.”