Welcome back to This Week in Apps, the Extra Crunch series that recaps the latest OS news, the applications they support, and the money that flows through it all. What are developers talking about? What do app publishers and marketers need to know? How are politics impacting the App Store and app businesses? And which apps are everyone using?

As mid-November rolls around, we’re looking at a few big stories, including Apple’s decision to ban an entire category of apps due to health concerns, the launch of Disney+ from an app perspective, what Black Friday will mean for e-commerce apps, and more.

With Disney+’s huge launch (10+ million users!) on everyone’s minds, it’s time to think about what these streaming newcomers mean for the overall landscape and the app stores. In this case, it seems that Disney+’s user base was highly mobile. The company itself announced more than 10 million users, while data on the Disney+ app’s first few days indicates it now has over 10 million downloads. It seems like consumers definitely want to take their new streaming service with them everywhere they go. 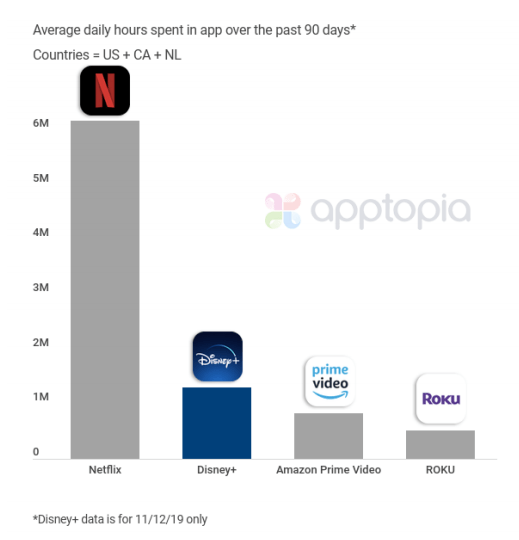 The CDC says 42 people have died due to vaping product use and thousands more cases of lung injuries have been reported from 49 states. Now, Apple has made the controversial decision to remove all 181 vaping-related apps from its App Store — including those with news and information about vaping and even vaping-related games, Axios reported this week.

Some say Apple is helping to protect kids and teens by limiting their exposure to e-cigarette and vaping products, which are being used to addict a younger generation to nicotine and cause serious disease. Others argue that Apple is over-reaching. After all, many of the lung illnesses involve people who were vaping illegally obtained THC, studies indicated.

This isn’t the first time Apple has banned a category of apps because of what appear to be moral concerns. The company in the past had booted apps that promoted weed or depicted gun violence, for example. In the case of vaping apps, Apple cited the public health crisis and youth epidemic as contributing factors, telling Axios that:

We take great care to curate the App Store as a trusted place for customers, particularly youth, to download apps. We’re constantly evaluating apps, and consulting the latest evidence, to determine risks to users’ health and well-being. Recently, experts ranging from the CDC to the American Heart Association have attributed a variety of lung injuries and fatalities to e-cigarette and vaping products, going so far as to call the spread of these devices a public health crisis and a youth epidemic. We agree, and we’ve updated our App Store Review Guidelines to reflect that apps encouraging or facilitating the use of these products are not permitted. As of today, these apps are no longer available to download.

Minecraft Earth launched early last week across 9 countries on both Android and iOS and now it’s come to the U.S., Canada, the U.K., and several other markets. Some expect the app will rival the success of the AR breakout hit, Pokémon Go, which was thought at the time to be the precursor to a new wave of massive AR gaming titles. But in reality, that didn’t happen. The highly anticipated follow-up from Niantic, Harry Potter: Wizards Unite didn’t come close to competing with its predecessor, generating $12 million in its first month, compared with Pokémon Go’s first-month earnings of $300 million. With Minecraft Earth now sitting at No. 2 (c’mon, you can’t unseat Disney+) on the U.S. App Store, it seems there’s potential for another AR kingpin.

A top name in App Store intelligence, App Annie this week released a new how-to handbook focused on user acquisition strategies on mobile. Sure the free download is just a bit of lead gen for App Annie, but the guide promises to fill you in on all you need to know to be successful in acquiring mobile users. The playbook’s arrival follows App Annie’s acquisition of adtech insights firm Libring this fall, as it expands to cover more aspects of running an app business. Just as important as rankings and downloads are the very real costs associated with running an app business — including the cost of acquiring users.