Same-day delivery is coming to Target’s app. The retailer announced this morning that its same-day shopping service Shipt, which Target acquired two years ago for $550 million, will now be integrated directly into the Target mobile application. Though Shipt is widely known as an online grocery service that competes with Instacart and others, Target is putting the service to work to do more than deliver food and various household items.

Instead, Shipt is turning into Target’s own version of Amazon’s Prime Now. Currently, Target shoppers can order 65,000 items from the app for same-day delivery, including not just groceries and essentials, but also toys, baby-care products, kitchenware and more. For comparison’s sake, Amazon says Prime Now offers “tens of thousands” of products for one or two-hour delivery. Shipt may not have quite as tight windows, however — just “same-day.” 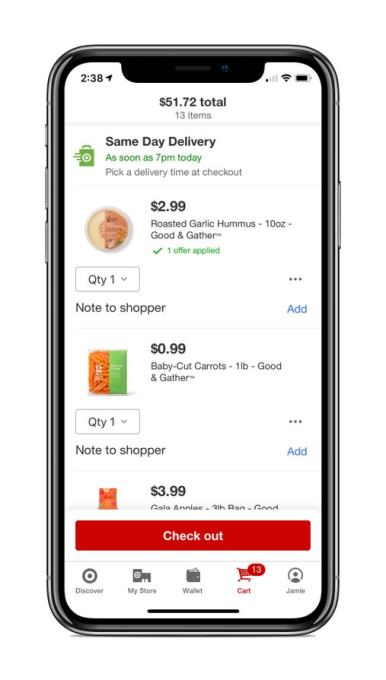 While Amazon doesn’t disclose how many products are available via Prime Now, as it varies by location, a 2018 study indicated that Amazon’s biggest markets offered around 55,000 Prime Now products per city, while many other cities offered 34,000-41,000 SKUs.

Unlike Prime Now, Shipt doesn’t require a membership, though one is available. Instead, shoppers can opt to pay a $9.99 delivery fee per same-day order. This is similar to how Walmart Grocery operates, though it’s now rolling out a subscription option for its more regular customers.

Shipt’s integration with the Target app doesn’t mean the dedicated Shipt app is going away — that’s still a more convenient experience for shopping groceries at this time. However, it is a way for Target to offer Shipt delivery to a wider customer base of mobile consumers.

The mobile integration follows the launch of a dedicated shopping site for same-day delivery on Target.com earlier this year, which had a similar goal. 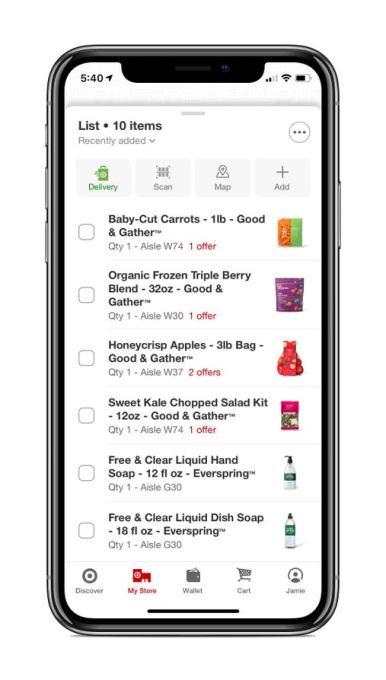 Target has been steadily modernizing its business to better compete with Amazon and help customers shop however they want — in-store, online or some hybrid of the two, as with Drive Up orders. In less than two years’ time, Drive Up became a top-rated service and it more than doubled the number of 2018 orders by fulfilling more than 5 million orders in the first part of the year, for example. Meanwhile, Target recently said that one in five customers were placing same-day orders with Target for the first time in Q2, indicating the potential for growth in same-day.

The same-day Shipt integration is rolling out today in the Target app, which also includes a new “My Store” tab where shoppers can convert lists to a shopping cart with a “Delivery” button. A “Discover” button also helps them to navigate and find other features, like deals and seasonal content.

Target tells us same-day delivery is now available in nearly 250 markets across 48 states.