Back at CES this year, we talked with 3D-printer maker Formlabs about its early experimentation in using its printers to make dentures faster and more affordably than existing alternatives.

A few months later, the company is going deep on the concept. They’re releasing a 3D printer meant specifically for dental use, opening up a whole new wing called “Formlabs Dental” and acquiring their main resin supplier in order to better make materials for the dental industry.

Unfamiliar with Formlabs? The main thing to know is that their printers use Stereolithography (SLA) rather than the Fused Deposition Modeling (or FDM) that most people probably think of when it comes to 3D printing; in other words, they use carefully aimed UV lasers to precisely harden an otherwise goopy resin into whatever you want to print, whereas FDM printers heat up a solid material until it’s malleable and then push it through a hot glue gun-style nozzle to build a model layer by layer. SLA tends to offer higher accuracy and resolution, whereas FDM tends to be cheaper and offer a wider variety of colors and material properties.

Formlabs calls its new dentistry-centric printer the “Form 3b” — which, as the name suggests, is a slight variation on the Form 3 printer the company introduced earlier this year. The base package costs about a thousand bucks more per unit over the non-dental Form 3, but comes with software meant to tie into a dental team’s existing workflow, along with a year of Formlab’s “Dental Service Plan,” which includes training, support and the ability to request a new printer if something needs repairing (rather than waiting for yours to get shipped back and forth). The company also says the 3b has been optimized to work with its dental resins, but doesn’t say much about how. 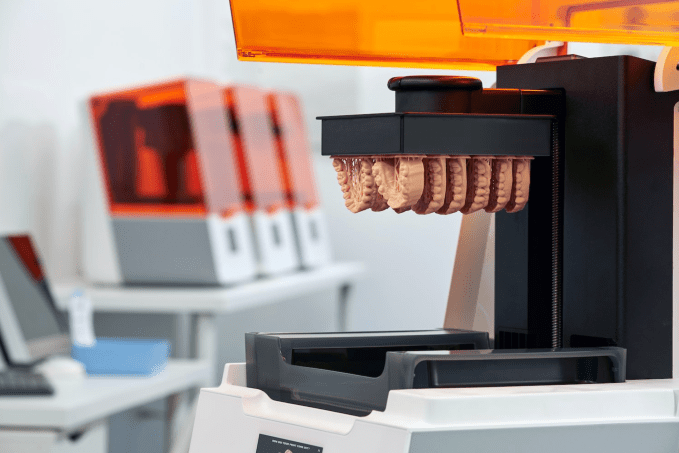 Speaking of resins: Formlabs is acquiring Spectra, which has been its primary supplier of resins since Formlabs started back in 2012. While the company isn’t disclosing any of the terms of the deal, it does say it has put over a million dollars into building an FDA-registered clean room to make medical-grade resins. Formlabs says that anyone who already buys materials and resin from Spectra can continue to do so.

The company’s new “Formlabs Dental” division, meanwhile, will focus on figuring out new dental materials and ways to better tie in to existing dentist office workflows. Right now, the company says, the Form 3b can be used to print crowns and bridges, clear retainers, surgical guides to help during dental implant procedures, custom mouth guards (or “occlusal splints”) and dentures.