Uber will become an ad platform, selling space inside its Eats app to restaurants hoping to lure in more food delivery orders. A recent Uber job listing spotted by TechCrunch seeks an Uber Eats Ads Lead “to lead the team and efforts responsible for creating a new ads business that enables eaters to discover new foods and restaurants to grow their customer base.”

An Uber spokesperson confirmed the company would be entering the ads business, telling TechCrunch, “We are exploring relevant ads in Eats.” Selling ads could help it improve margins on Eats, where it only takes 10.7% of gross bookings as adjusted net revenue because it pays out so much to restaurants and drivers. 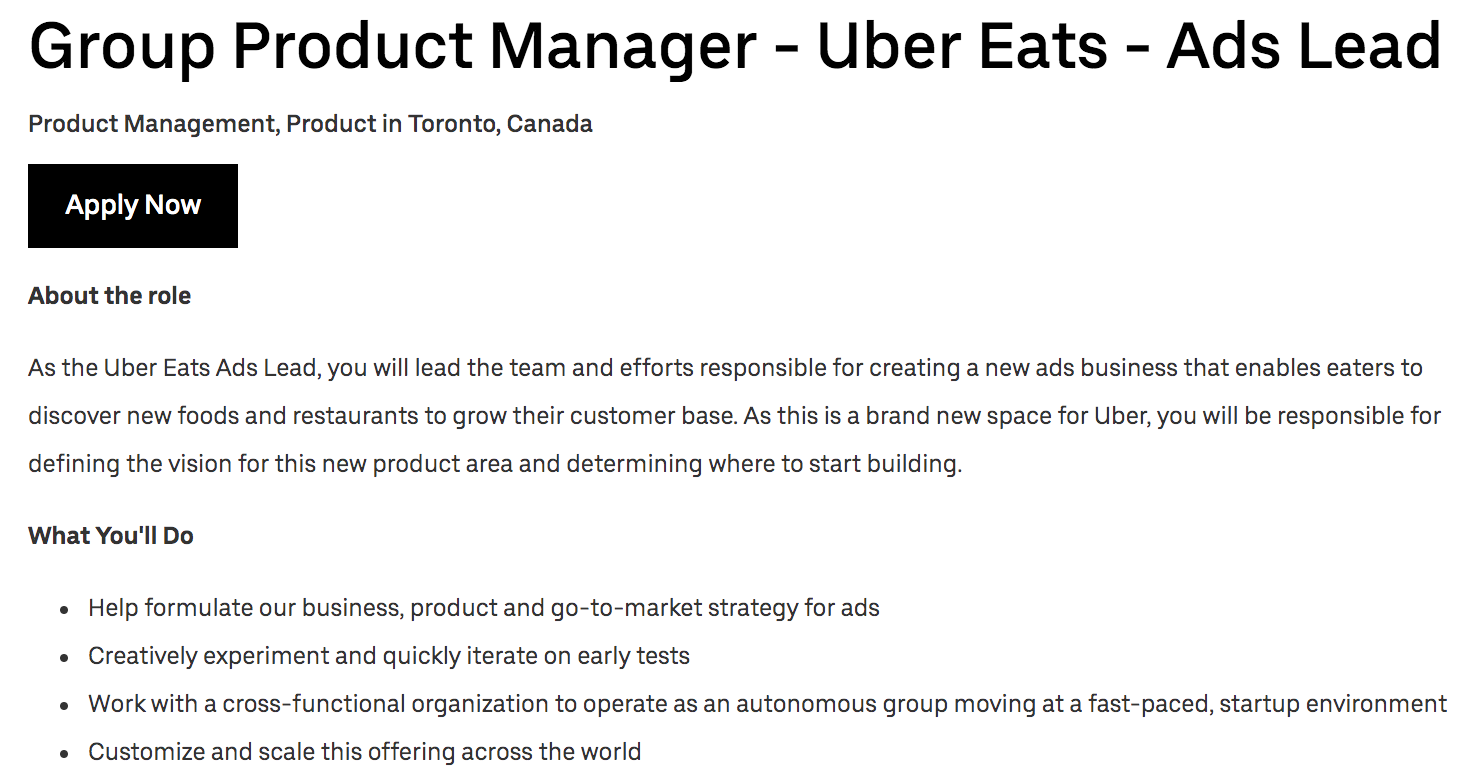 The fresh opportunity in ads comes at a critical time when Uber is desperate to show its future potential in the face of a sagging share price that closed at $28.02 yesterday, down 40% from a high of $46.38 in June. Today, Uber’s post-IPO stock lock-up expires and early investors are able to sell their shares, putting newfound pressure on its stock.

TechCrunch was the first to discover a prototype of Eats ads in December, called Specials, where restaurants could get featured placement in the app in exchange for offering a discount. This demonstrated Uber’s ability to steer hungry users to order from particular restaurants. 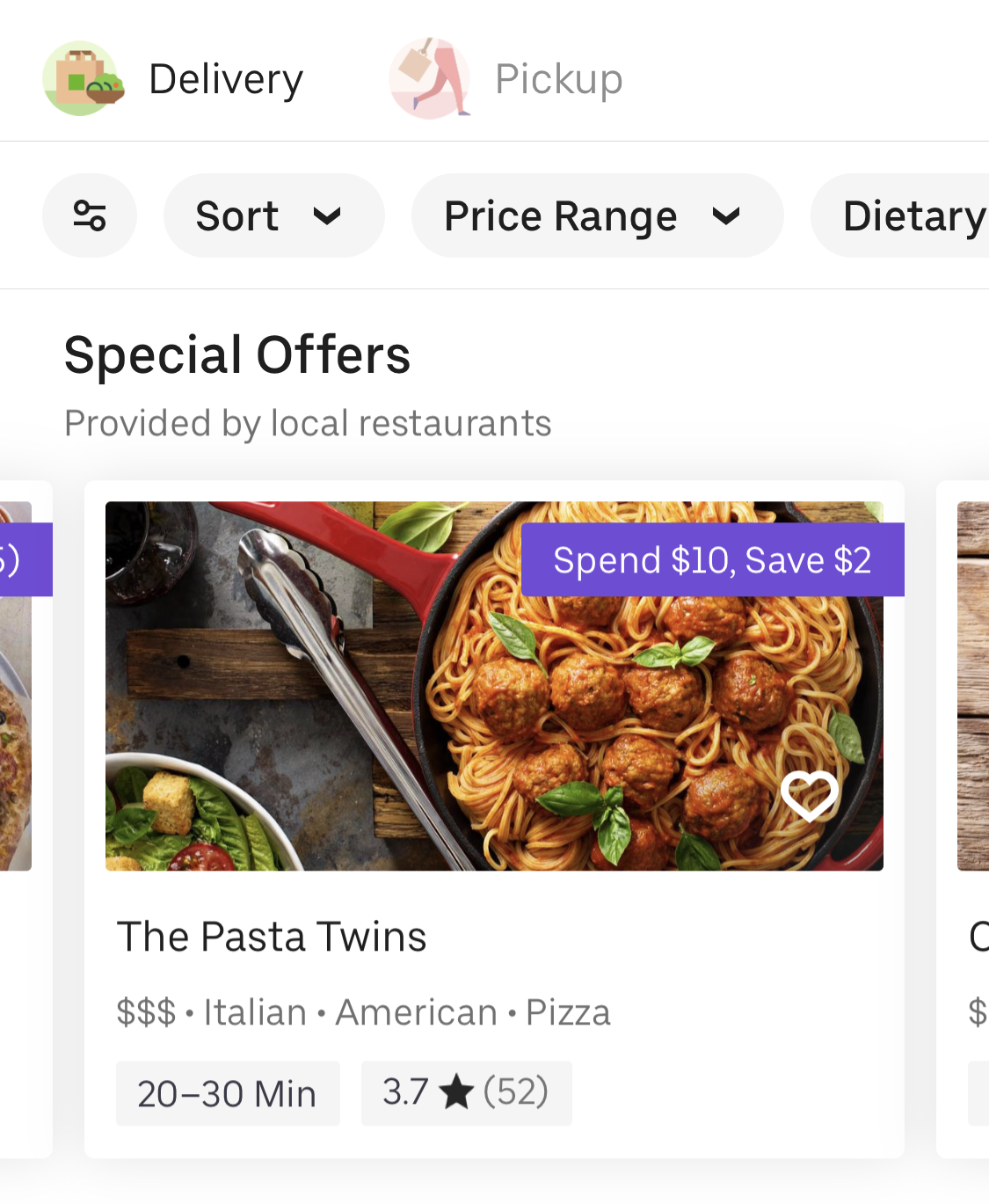 I followed up with Uber’s senior director and head of Eats product, Stephen Chau, who hinted at the company’s aspiration in the ads business. “There’s a bunch of different ways we can work with restaurants over time. If we have all the restaurants on the marketplace and we give them tools to help them grow, then this will be a very efficient marketplace. They’re going to be spending those ad dollars somewhere,” Chau told me. We’ve been checking on the company’s progress in ads ever since.

As we predicted, now instead of just a quid pro quo, where Uber exchanges added visibility to restaurants willing to offer discounts that could keep users loyal to Uber Eats, it plans to formally sell ads.

How Uber will become an ad company, starting with Eats Pool

“As this is a brand new space for Uber,” the Toronto-based Eats Ads Lead “will be responsible for defining the vision for this new product area and determining where to start building.”

The job listing also notes whoever takes the role will “Help formulate our business, product and go-to-market strategy for ads” and “Creatively experiment and quickly iterate on early tests.” Signaling global ambitions for Eats ads, the Lead will “Customize and scale this offering across the world.”

The effort is separate from Uber’s own marketing efforts that see it spend more than $1 billion per year to recruit riders, drivers and Eats customers. Uber will start selling the ads, not just buying them.

The potential for Eats ads stems from Uber’s place as a destination for choosing what to eat, not just ordering it. Wherever there is discovery, there are opportunities for paid discovery. And as Uber focuses on cross-promoting Eats inside its main ride-hailing app, it could suck in more users that are open to suggestions that restaurants pay to provide.

We don’t have details on exactly how Uber’s ads will look. However, you could imagine them appearing on the home page, the browse section or even in search results for certain cuisines or restaurants. Restaurants hoping to boost orders could pay to appear to users who are hungry but don’t know what they want to eat, or to appear before competitors in the same food style. 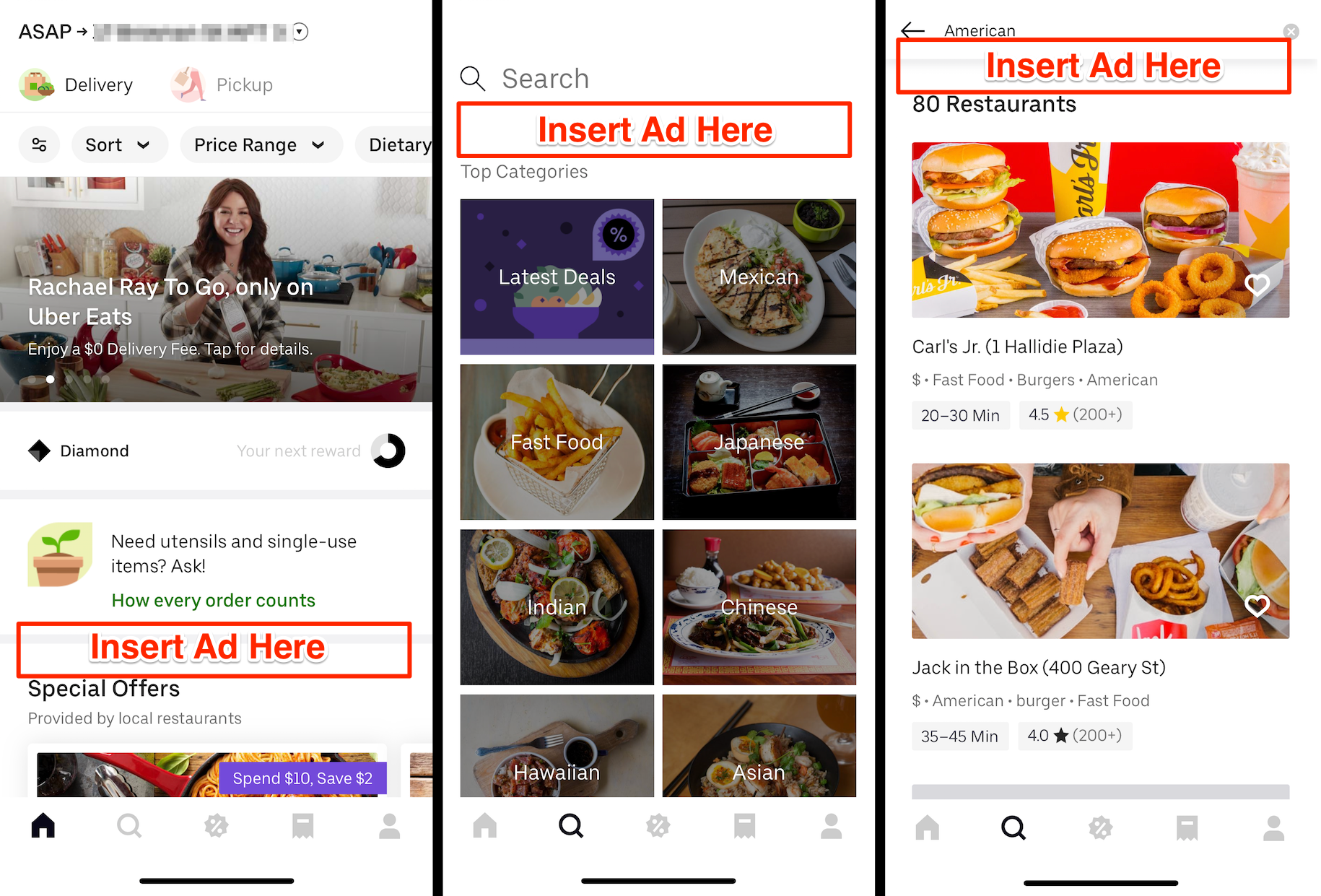 Amazon successfully navigated a similar expansion from marketplace to ad platform; eMarketer expects Amazon’s U.S. ads business will grow 33% this year to reach $9.85 billion, and claim 7.6% of the total U.S. ad market, which makes it the biggest search ad player behind Google.

Uber could use any revenue it can get. This quarter the company lost $1 billion, with $316 million of that loss coming from Eats. But Eats’ revenue grew 64% year-over-year, showing it’s increasingly popular, and could command enough user attention to make advertising lucrative.

Ads also could serve as a wedge for Uber to move deeper into business intelligence services for restaurants. It could apply its data on food delivery demand to help kitchens to optimize prices, allocate staff and improve menus.

To save its share price, Uber’s best bet is to find new streams of cash it doesn’t have to share with drivers or restaurants. It may still be years until self-driving vehicles arrive to rescue Uber from its tremendous costs.