Brutally expensive housing markets, fierce competition over a shrinking talent pool and unbearably long commutes: these are some of the challenges plaguing typical tech hubs like the San Francisco Bay Area, Seattle, Los Angeles and Boston.

While some of these areas continue to have the gravitational pull that draws venture capital funding and tech talent, downside factors including high costs and difficulty retaining talent deter smaller tech companies from locating in these markets. Not only are smaller tech companies shying away from a crowded tech scene, but larger tech companies that have outgrown their headquarters are shifting their gaze to markets that have previously flown under their radar.

At Zillow, we analyzed data to determine the best markets that provide fertile environments for startups or tech companies looking to put down stakes for their next office. In additional to tapping the U.S. Census and Bureau of Labor Statistics, we leveraged our own data products at Zillow, partnered with Ookla for internet insights based on Speedtest data as well as LinkedIn for the availability of tech skills based on their skills gap data. The analysis focuses on factors that would entice skilled workers and therefore present strong opportunities for tech companies looking for talent outside the usual tech orbits. 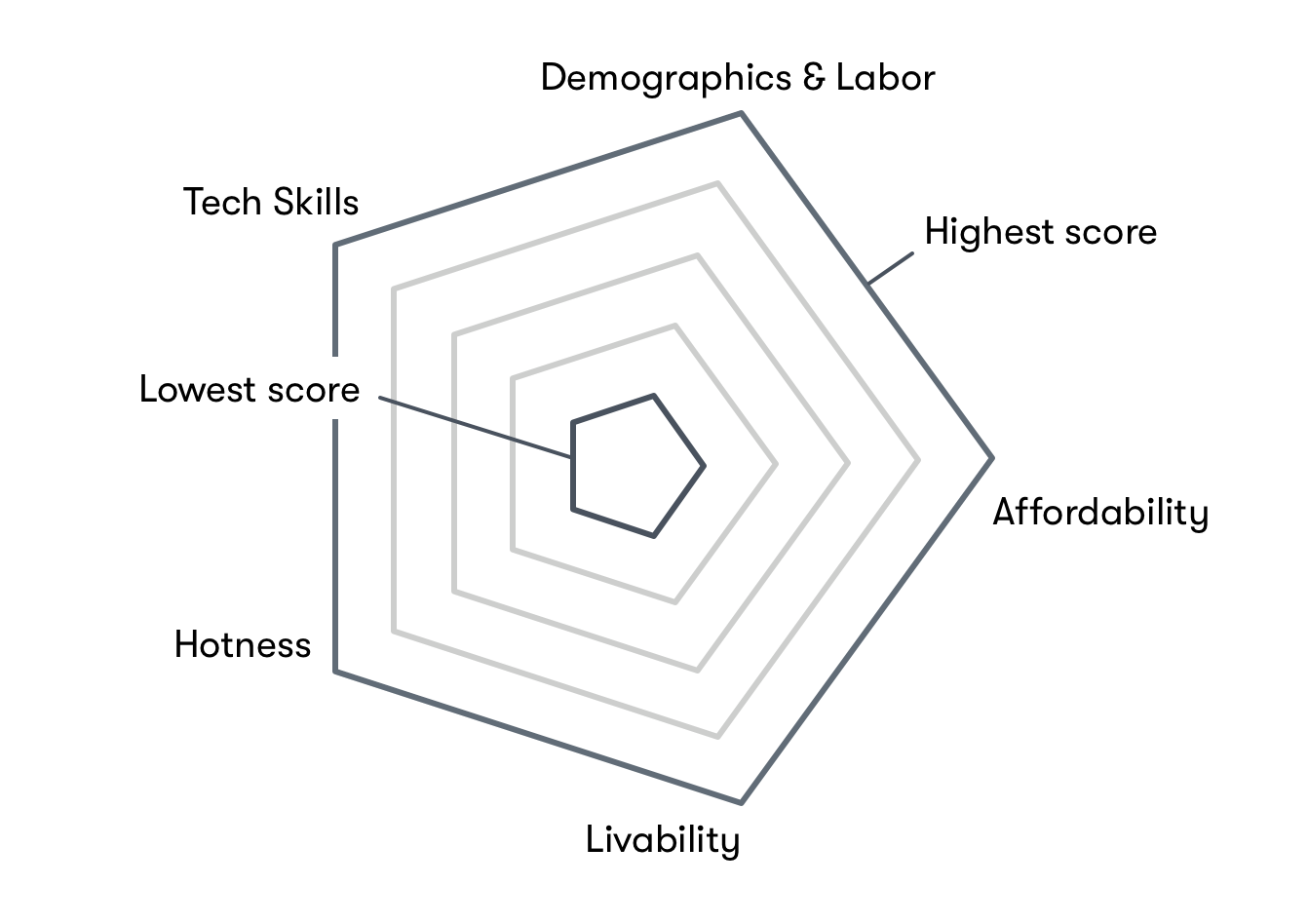 Five categories that determine how ripe markets are for tech growth.

Topping the list of markets that may beckon to startups are those smack in the middle of Silicon Prairie. Rounding out the top 10 are markets in the Midwest and the South that have the ability to draw talent and the tech companies looking to hire them. What’s more, the traditional tech hubs occupied the bottom of the rankings because of eroding affordability and quality of life.

“Rising costs of living and soaring housing prices in many major U.S. cities means that employers need to build pay structures that allow their employees to live and work in the same city. And if they don’t, they may end up paying the price,” said Jenny Ying, Data Scientist, Economic Graph at LinkedIn. “Our data shows that many people will choose to leave the area altogether in search of a better quality of life, a trend we already see starting to manifest in many of the country’s biggest tech hubs; New York, Los Angeles, the San Francisco Bay Area and Seattle have the lowest tech skills scores on the list, driven by demand for this talent outpacing available supply.”

Oklahoma City and Kansas City lead the list of markets where tech companies should consider locating. These cities rank high in affordability — where typical income earners are spending a relatively smaller share of their income on housing, livability (Kansas City tops the list in this category) and the availability of tech skills.

Oklahoma City and Kansas City lead the list of markets where tech companies should consider locating.

A number of southern markets such as Jacksonville, FL, San Antonio and Austin plus Cincinnati also rank among the top 10 in terms of market hotness. Robust rents and/or home value growth as well as more people searching into the area than searching out, suggest these places are poised for growth and an influx of people.

A number of southern markets rank among the top 10 in terms of market hotness.

While this analysis highlighted markets like Austin that are already considered ripe for growth in the tech sector, most of the markets occupying the top 10 list were less obvious contenders. But what about traditional tech hubs?

Indeed, traditional tech hubs occupied all of the bottom slots on the ranking. Chicago — not typically thought of as a tech hub — was also at the near the bottom of the rankings. Lack of affordability is a major concern for tech hubs: Los Angeles and the SF Bay Area have the worst affordability rankings of all markets examined in this study.

Los Angeles and the SF Bay Area have the worst affordability rankings of all markets examined in this study.

Expensive housing means that employers need to be able to pay top dollar to remain competitive in high cost of living areas, and this compensation pressure is exacerbated by the dwindling supply of skilled tech talent. New York, Los Angeles, the San Francisco Bay Area and Seattle have the lowest tech skills scores on the list, driven by the low supply of skilled tech workers relative to demand. While labor market indicators continue to be strong for tech hubs like the San Francisco Bay Area and Seattle, they are not enough to compensate for waning affordability, a lack of availability of skilled tech workers, a sluggish housing market and long commutes.

To determine the best markets that provide the best environments for startups, we examined a number of factors that would attract tech companies and help retain tech talent:

Demographics and the labor market