Google Play is launching a new rewards program, Googe Play Points, that will allow you to earn points for everything you do on the Google Play marketplace, from downloading new apps to subscribing to services to buying movies, books and more. Users can redeem the points earned in the program for things like in-app purchases of characters, gems and other items in apps like Candy Crush or Pokémon GO, for example. Play Points also can be turned into Google Play Credit, then put toward renting a movie or buying an audiobook, Google says.

These rewards points will encourage people to launch their apps more often and more broadly participate in the Google Play ecosystem.

The program launched in Japan and South Korea, in September 2018 and April 2019, respectively. This is the first time it’s arriving in the U.S.

It’s also been slightly tweaked in terms of point value and levels for its U.S. launch. The new U.S. program has four levels — Bronze through Platinum. You move up as you earn more points. At the higher levels, you’ll also earn weekly prizes.

The point value begins at $1 USD for the Bronze level and goes up to $1 for 1.4 points at Platinum.

Special events may be hosted where you’ll have the opportunity to earn more points than usual. For example, for this kickoff week, everyone will earn 3x the usual Play Points on everything they buy.

In addition, users can donate their points to support a charitable cause, like Doctors Without Borders USA, Save the Children or the World Food Program USA. These nonprofits will rotate over time.

Beyond Candy Crush and Pokémon Go, there are dozens of other apps also participating in Play Points at launch, with more to come. Google is funding the points, so there’s no impact on developer revenue. That is, developers won’t have to choose to participate and accept points as opposed to earning revenue from purchases. 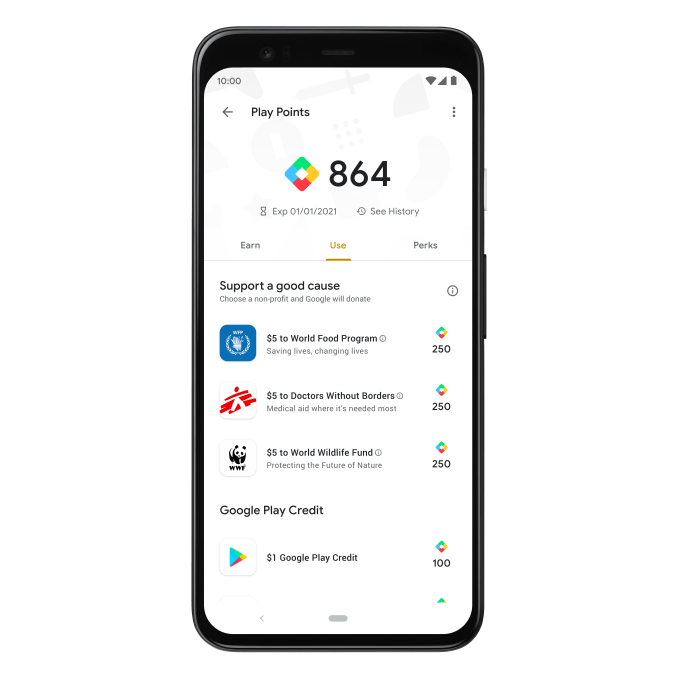 A program like this gives Google more control over its marketplace, as it can turn the dials to boost engagement by offering rewards to its users. Participating apps benefit because it can drive customers to their app, where they’ll eventually spend more money over time.

Google is already familiar with how to incentivize users through gamification techniques — it rewards Local Guides for contributing to Google Maps, for example, with nothing more than badges and a handful of small perks.

The same goes for Play Points — these rewards are relatively small in scale, but could create a much larger incentive, by comparison, to download, play and purchase from Google Play. There’s also a longer-term goal of keeping users in the Android ecosystem by rewarding their loyalty with points that work like cash, in a sense. 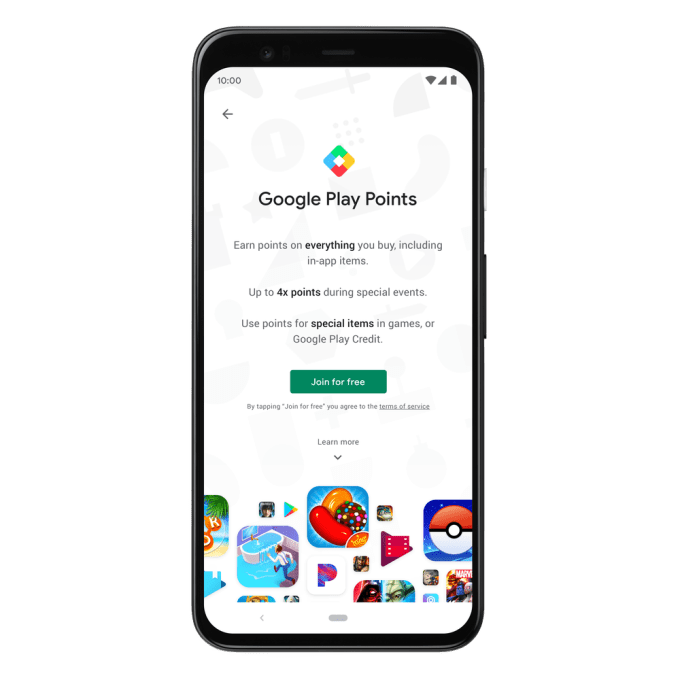 Google Play Points will be available over the next week. The program is free to join and there’s no ongoing fee. To access Play Points, just go to the menu in the Play Store app and tap on “Play Points.”

Worldwide, Google Play has more than 2 billion users in 190 countries, but those with a rewards program like this — Japan, South Korea and now the U.S. — are Google Play’s most lucrative markets. In fact, they’re No. 1 (U.S.), No. 2 (Japan) and No. 3 (South Korea), in terms of 2018 consumer spend on Google Play, according to data from App Annie. That makes them the most important markets for Google to target with rewards, in terms of boosting usage and spending.