Space-based businesses don’t all have to be about communications or Earth observation — European startup Space Cargo Unlimited, for instance, is focused on what operating in a microgravity environment can unlock for research and manufacturing. Accordingly, the company just launched an unusual payload to the International Space Station (ISS) — 12 bottles of wine.

The wine is not leisure-time supplies for the astronauts on board the ISS; instead, it’s part of an experiment that will study how the aging process for wine is affected by a microgravity, space-based environment. Wine samples taken from the same batch will be aged simultaneously on Earth over the same 12-month period, and then the results will be compared when the ISS wine shipment returns on a future cargo craft trip back. 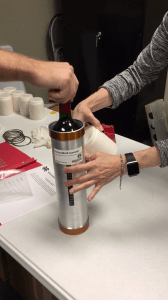 Both the Earth and the ISS wine samples will remain sealed in their glass bottle environments, and they’ll be kept at a constant temperature of around 18 degrees celsius (or around 64 degrees Fahrenheit), undisturbed, to let the interior complex biological environment of the bottles do their work. Researchers predict there will be taste differences that result from the effect that microgravity and space-based radiation will have on physical and chemical reactions, but the only way to find out for sure is to give it a shot.

It sure sounds like this could set up a new line of literally “space-aged” wines that command a pretty premium, but Space Cargo Unlimited says that their work is more “following in the footsteps of Louis Pasteur,” who essentially developed pasteurization though experiments with wine fermentation. To that end, it’s hoping this experiment will produce results that could have broader applications across food preservation and the related technologies.