The Shelby GT500 is a beast on the track. It’s not a surprise. After a day driving around Las Vegas, I found something that surprised me: The GT500 is as comfortable on the road as it is on the track.

The Shelby GT500 is an icon of motoring. The name implies a simple formula of stuffing a lot of power into a modest body. I’m pleased to report Ford stuck to the proven method for the 2020 GT500. A 5.2L supercharged engine provides 760 HP in this coupe. It’s the most powerful Ford ever mass-produced. The 2020 Ford Mustang Shelby GT500 is a future classic, and unlike its predecessors, the car is memorable for more than just going fast in a straight line.

The 2013-2014 GT500 was a monster. It was raw and unhinged and had the thumping soul of a muscle car from a bygone era. It was a Mustang in its purest form. Fast down the drag strip and prone to crash when burning out of Cars and Coffee. This time around, Ford created something different. The 2020 GT500 is still packed with power, but refined enough to create a vehicle that’s capable and comfortable. 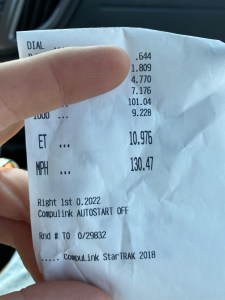 On the track, The GT500 dives into corners and roars down the straights. On the drag strip, it hits the quarter-mile in less than 11 seconds (I did a 10.98). And on the street, it’s comfortable driving between red lights. The GT500 is a car someone could drive daily to and from an office park. I took my tester to Starbucks and through the back streets of Las Vegas. It’s sublime thanks to a brilliant implementation of a seven-speed dual-clutch transmission.

The DCT manages the communication between the engine and tires. It’s lovely. The dual-clutch transmission is lightning quick, with shifts happening as fast as 80ms. On the track, that’s critical, and on the streets, it makes for easy driving. When cruising from red light to red light, the shifts are refined. They’re quick and light as they translate the engine’s obscene power into mild motoring.

During my short time with the 2020 GT500, I never felt overwhelmed with power when driving it on city streets. The 2020 GT500 is an exercise in controlled restraint. Somehow this 760 HP Ford can hit 60 mph in 3.3 seconds and still be easy to putz around town. It’s surprising and a testament to the advances made within Dearborn.

The on-street feel is critical to the success of the latest GT500. Not everyone is looking for a dragster or track superstar. With this performance car, Ford is punching up, appealing to entry-level Porsche and BMW buyers with sticker shock. The GT500 is not apologetic. It’s not trying to be a European sports car, and yet I find it competitive with some of the best from Germany.

Yet don’t sleep on this GT500. When instructed, the 760 HP engine will rip the soul from your body. Drop the pedal to the floor, and it hits 60 mph nearly as fast as Ford’s GT supercar.

The interior is lackluster for the price. When the GT500 is fitted with all the options, it approaches six figures. The performance is worth the sticker price, but the interior is that of a car costing around $30,000. The GT500 comes with upgraded seats, extra gauges and some materials are improved. In the end, the GT500 lacks the interior refinement of an M3 or AMG C Class, and it will likely cost Ford some sales.

Ford engineers fitted the Shelby GT500 with a powertrain that will devour tracks. The dual-clutch transmission keeps the 760 HP supercharged engine in line. During my time on the track, this DCT performed admirably, gleefully holding shifts until the right moment and rev-matching downshifts while dipping into corners. Sure, a manual transmission would be fun at times, but using this DCT means peak performance is more obtainable.

The 2020 Shelby GT500 attacks corners, unlike any most muscle cars, dipping and diving without a hint of the brakes fading. It grips better than expected, holding the tires on the tarmac even during the most extreme cornering. The on-track performance is impressive for any car, let alone a Mustang. The GT500 offers class-leading track performance. A Dodge SRT Hellcat Redeye will beat the Mustang to a quarter-mile, but the Mustang will pull ahead at the first corner.

On the drag strip, nearly anyone can hit an 11-second quarter mile. During my time at the track, there was a stiff headwind, and it took me four runs down the strip to go from 11.4 seconds to 10.98 seconds. Ford says the car can do it in 10.9, and I see little reason to doubt that time.

Monster burn-outs are a few menu options away. With just a couple button presses, a novice can lock the front wheels and spin the rears to create a massive plume of burning rubber.

Turn the exhaust to normal or track, and the car screams when the throttle is wide open. The noise is impressive. It’s full range and sounds more supercar than muscle car. I found the exhaust note to be more expansive than just an explosive rumble.

I asked a Ford engineer if the GT500 was louder than the GT350. He laughed before answering with a straight face. “First of all, both are legal,” he said, alluding to the explosive exhaust note. Unlike the GT350, the GT500 has a quiet mode. It’s not as soft as a Camry, but in this mode, the GT500 is less obnoxious, making it easier to drive daily.

It’s hard to imagine where the Mustang goes from here. I spent a day racing the GT500 around desert roads and the Las Vegas Speedway. It’s incredible and exceeded my expectations. The GT500’s power is endless, and the noise is intoxicating. How does Ford improve while maintaining the Shelby Cobra heritage? Likewise, will future versions lean on electric motors to squeak even more performance from Ford’s pony car?

Never mind about the future. As it sits right now, the 2020 GT500 is the pinnacle of muscle car performance.

Purists will decry Ford’s use of an automatic transmission in this car, saying the GT500 should have a standard instead. It’s understandable. A manual transmission results in a commanding feeling of control. And for those looking for such experience, the much-less expensive GT350 is worth a look. The GT350 offers much of the usable power of the GT500 in a more traditional package. In the run-up to driving the GT500, I borrowed a 2019 GT350 for a week. It’s a beast, and I loved it. The steering seemed more direct than the GT500, and the manual transmission resulted in the feeling of unhinged power that’s somewhat lacking in the carefully packaged GT500.

Want an over-the-top, muscle car feel? Get the GT350. Want a supercar experience at a pony car price? Get the GT500.

It’s nearly a mischaracterization to call the GT500 a muscle car. The GT350 is a muscle car with its standard transmission and raw 5.2L flat-plane crank engine. The GT500, with its supercharged 760 HP engine and dual-clutch transmission, is something more refined. It’s not a supercar, nor is it a muscle car. It’s just a fantastic sports car living its best life.

It’s undeniable: In 2019, we are living in the twilight of combustion engines. Electric is the future. And in these last days, internal combustion engines are a work of art. Automakers from all parts of the globe are turning out wonderful engines that are breathtaking in their efficiency and performance. The supercharged 5.2L found in the GT500 is a masterpiece.

The Ford Mustang Shelby GT500 is the most powerful Mustang to date, and I would venture to say, one of the last without an assist from an electric motor. Enjoy it while it lasts. These sorts of fossil fuel-burning, greenhouse gas-emitting monsters from Detroit are long for this world. 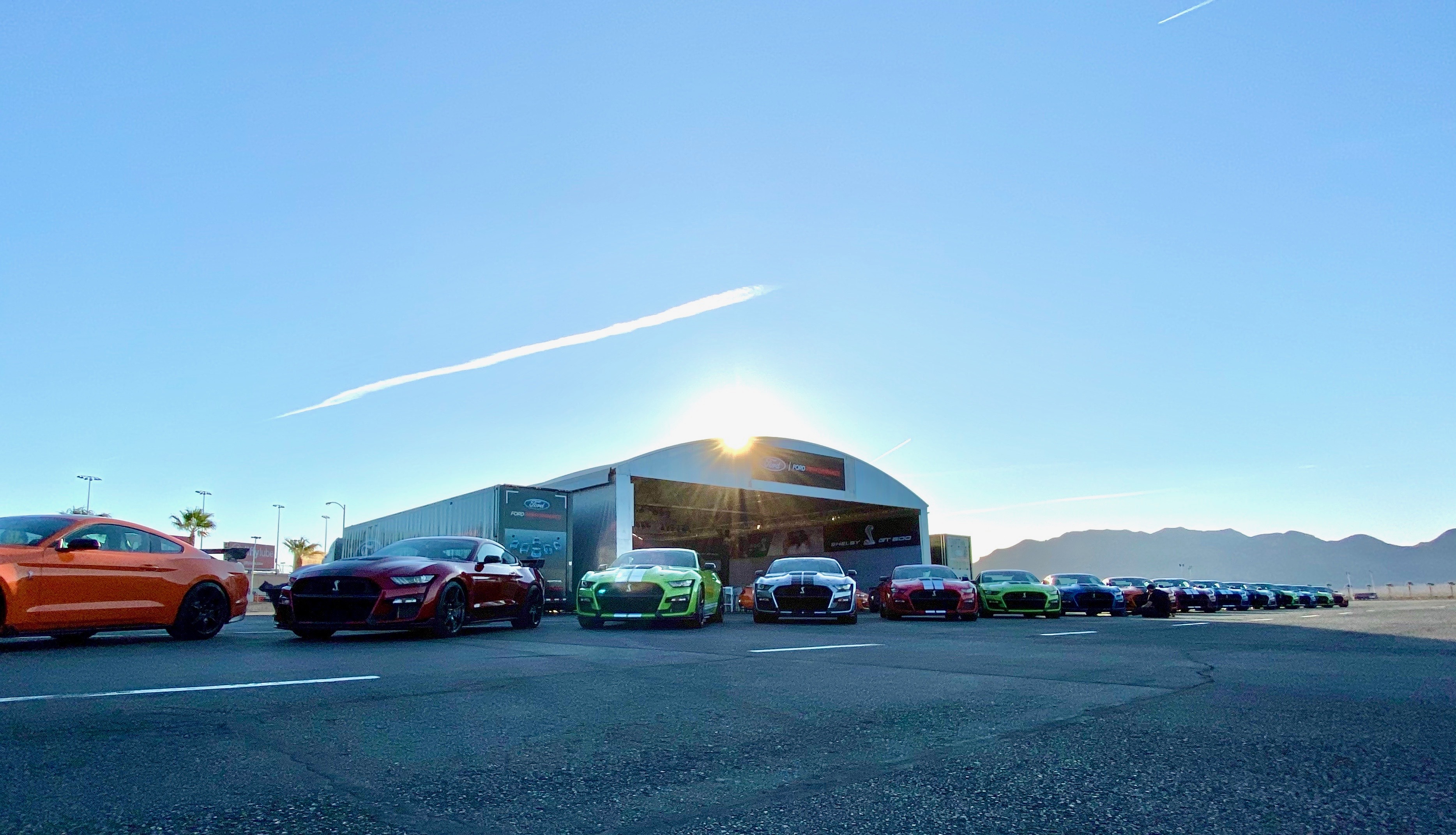