Supercross was poised to launch an all-electric class this month, by converting its junior program to a new e-moto manufactured by KTM — Supercross Director of Operations Dave Prater told TechCrunch in April.

“We haven’t one-hundred-percented it yet, but it’s fairly close and we’re…going to race that electric KTM in October,” he said.

That won’t likely happen for the upcoming 2020 season, but input from Supercross and KTM indicates the launch of a junior EV class could be imminent.

On why it didn’t kick-off in October, “That would be a KTM question,” Prater told TechCrunch on a call this week.

“As a company, we’re embracing EV racing. At the moment, we’re beholden to the OEM’s and how quickly they want to introduce it into the mix,” he added.

The first-mover OEM could still be KTM and the first electric class the juniors.

“The KTM Junior racing in Supercross is an incredible experience for a small group of kids and their parents. At some point we might start using the SX-E5,” KTM’s Group Marketing Manager for North America Tom Moen told TechCrunch in an email.

“We can’t have them racing something that is not readily available,” he added. 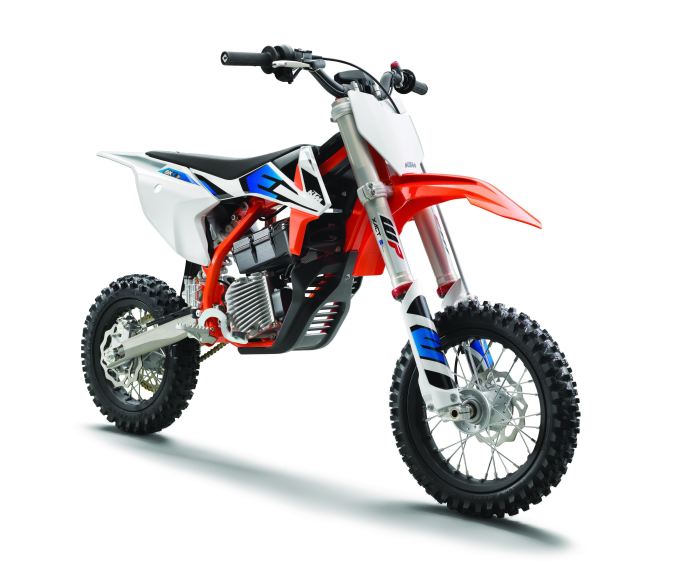 KTM’s SX-E5 launched in the U.S. this month, but won’t be available in dealerships until late November, according to Moen.

So for now, there appears to be a timing gap between Supercross and KTM.

Another area to watch for the introduction of e-moto competition — according to Moen — is outdoor dirt series Motocross, the rules of which (like Supercross) are governed by the American Motorcyclist Association (AMA).

“The AMA…is working on classes for the AMA Loretta Lynn’s championships for 2020, which is the national amateur MX series, the finals happen late summer, this is much more important racing wise,” Moen said.

TechCrunch has an inquiry into AMA for confirmation and will update accordingly.

One hurdle to entering electric motorcycles in AMA gas racing is how to classify battery powered two-wheelers compared to internal combustion engines that the AMA classes based on displacement, AMA off-road racing manager Erek Kudla explained to TechCrunch in April.

The other potentially larger hurdle (as Supercross’s Dave Prater alluded to) is the lack of an OEM-produced competition e-moto capable of racing at or near the specs of the high-performance gas machines that run in Supercross and Motocross.

California based EV startup Alta Motors had come the closest toward creating an e-moto toward that endeavor, but went bankrupt before getting there.

In addition to its junior SX-E5, KTM debuted its Freeride E-XC adult off-road e-motorcycle in the U.S. in 2018, but KTM didn’t indicate if this was the bike it was planning to reconfigure for motocross.

For the moment, it looks like seven to eight-year-olds racing KTM’s SX-E5 in Supercross could be the nearest bet for EV motorcycle competition.

And Supercross creating an all EV junior class has a spot of relevance in the overall transformation of global mobility — namely the conversion of the motorcycle industry to electric.

Factors such as declining sales among young people and competitive pressure from EV startups are pushing the big names toward E offerings. Harley-Davidson launched its first e-moto, the $29K  LiveWire, this year as part of a full EV pivot.

Zero Motorcycles is challenging HD with its new $19K SR/F.  And rumors have floated on Ducati developing an e-moto, after the Italian company debuted two e-bicycles.

Harley and e-moto companies such as Zero have spoken of the importance of early adopters to embrace e-motorcycles. Harley made moves this year to reach the earliest of early adopters when it acquired kids e-bicycle company StaCyc.

Launching one of motorcycle racing’s first all-electric classes with juniors and pairing it to Supercross’s stadium venues could become more than an EV gateway for OEM KTM.

It could actually start young riders on e-motos before they’ve ever ridden gas and keep them running on voltage into teen and adult years.

For the motorcycle industry at large, that means creating a future EV market versus trying convert one with preferences set in the fossil-fuel the past.