Disney’s new streaming service, Disney+, doesn’t launch until mid-November, but it may have already signed up more than a million customers in the U.S., according to new data from analytics firm Jumpshot, out this week. The firm, which gathers data from a panel of online consumers to gain insights, is not the only one forecasting a promising start for the upcoming streaming service.

In mid-October, analysts at UBS said they polled 1,000 consumers and 86% said they had heard of Disney+. In addition, 44% said they were “likely” to subscribe — a figure that put Disney+ ahead of Disney’s internal forecasts from April of 20 million to 30 million U.S. subscribers by 2024. (Disney also expects 60 to 90 million worldwide subscribers by that time.)

Similar to comScore, Jumpshot uses a panel of 100 million devices to gather its consumer insights. The firm claims to be able to view data about consumer searches, clicks and transactions, including those behind walled gardens, like Amazon, Netflix, Google and others.

In the case of the Disney+ data, Jumpshot tracked the number of visits to a sign-up page, then how many users followed through to purchase. It uses a statistical calibration from the panel to represent the U.S. internet population at large.

Its data for Disney+ is limited to the U.S. and only includes mobile web and desktop purchases during the pre-sale time frame of August 25 through October 14.

Jumpshot is also among the first to gather insights about the makeup of the early Disney+ subscriber base.

The firm found that 31% of the Disney+ subscribers already stream on at least one existing over-the-top platform, like Amazon, Hulu or Netflix. Of those, 19.4% stream from Amazon Prime, 9.1% stream from Hulu and 18.5% stream Netflix. 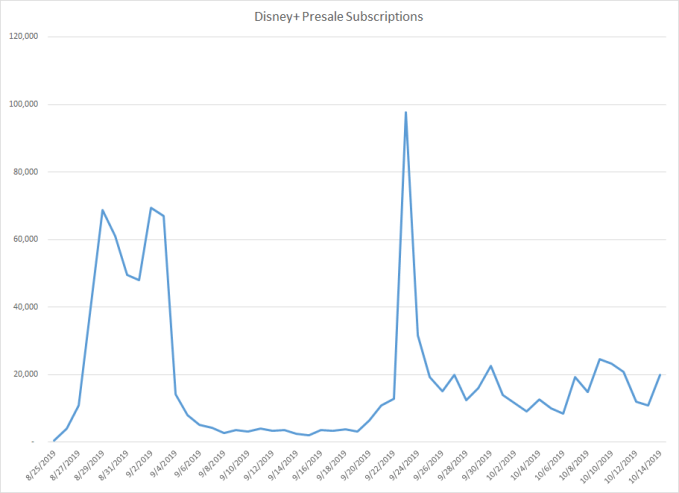 Jumpshot’s data is useful, but can’t yet paint a full picture of Disney+ consumer interest in the U.S. Many U.S. consumers will simply gain access to the new service by way of Verizon, which partnered with Disney to offer a free year to its new and existing 4G LTE and 5G unlimited wireless customers. (Disclosure: TechCrunch’s parent, Verizon Media Service, is owned by Verizon). Others may be waiting to sign up after the service launches, perhaps through a TV platform app, instead of the Disney+ website.

However, Jumpshot data is based on tracking consumer activity, not on polls.

That said, other studies have also confirmed there’s strong interest in Disney+ — stronger, in fact, than some other soon-to-launch rival streamers. A HarrisX poll, for example, found 21% of U.S. households intend to sign up for Disney’s streaming service, versus just 11% for HBO Max. Hub Entertainment Research’s poll found that one in four TV U.S. consumers said they’ll sign up for Disney+, versus 6% for Apple TV+.

Meanwhile, a TV Time and UTA IQ study delved into brand awareness, and found Disney+ and Apple TV+ had the highest levels of awareness at 88% and 63%, respectively, among the upcoming services. This was followed by HBO Max (37%) and NBCU’s Peacock (28%).

Notably, Disney+ wasn’t only appealing to families with children, the study also found. Families were no more or less likely to subscribe than those without kids, indicating that Disney is doing well in appealing to adults by way of its franchises, like Star Wars and Marvel.

It still remains to be seen how the streaming wars will pan out when Disney+, Apple TV+, HBO Max, Peacock and Jeffrey Katzenberg’s Quibi all make their U.S. debuts. Most consumers, after all, have limits on how much they can spend on subscriptions. And TV is only one of many subscriptions we have these days, alongside those for music, news, gaming and more.