The internet and search engines like Google have made the world our oyster when it comes to sourcing information, but in the world of business, there remains a persistent need for more targeted market intelligence, a way to get reliable data quickly to get on with your work. Today, one of the startups hoping to build a lucrative operation of its own around that premise is announcing a round of funding to get there.

Crunchbase — a directory and database of company-related information that originally got its start as a part of TechCrunch before being spun off into a separate business several years ago — has raised $30 million, a Series C that it plans to use to continue expanding its base of paid subscribers and expanding its product to include more predictive, personalised information for its users by way of more machine learning and other AI-based technology.

CEO Jager McConnell, who has long viewed Crunchbase as the “LinkedIn for company profiles,” said that of the 55 million people who visit the site each year, the company currently has “tens of thousands” of subscribers — subscriptions are priced at $29/user/month varying by size of company contract — which works out to less than 1% of its active users. That’s “growing quickly,” he added, speaking to site’s potential.

Indeed, he noted that since its last round in 2017, when it raised $18 million, Crunchbase has tripled its employees to 120 and has 10 times more annual revenue run rate. It’s also more than doubled its traffic since being spun out.

This latest round was led by Omers Ventures, the prolific investment arm of the giant Canadian pension fund of the same name (which is, incidentally, also now opening an office in Silicon Valley to get even more active with startups there).

Existing backers Emergence, Mayfield, Cowboy Ventures and Verizon (which still owns TC) also participated. McConnell said Crunchbase is not disclosing its valuation with this round, but he did note that it was “well within the target range” that the startup had set, that it was an oversubscribed upround and that it was on the more practical than exuberant side.

“I believe we are seeing too many high valuations with low annual revenue rates, and it’s catching up with people, and we were very focused on not hitting that valuation trap in order to be successful in the future,” he said. “This is a good round but not something insane.” Strong logic I suspect could be supported by Crunchbase data. For some context, Crunchbase had a post-money valuation of $70 million in its previous round in 2017 (having raised $26 million), according to PitchBook — ironically, one of Crunchbase’s big competitors (CB Insights, Owler being others.)

With its start as a side project of TechCrunch, the DNA of Crunchbase has always been in tech companies, and that is still very much the heart of the data that is in the system today. The kind of data you can get via the site includes basics on when a company was founded, who the founders are, who the current executive leadership is, how much money it has raised and from whom and what has been written about it in the media. You also can find original content on the site by way of its own team of writers covering funding rounds and other Crunchbase-relevant content.

Then, via a number of third-party integrations with companies like Siftery and SimilarWeb, you can get deeper data around competitors and more (most of which you can only see if you are a paying, not free, user). 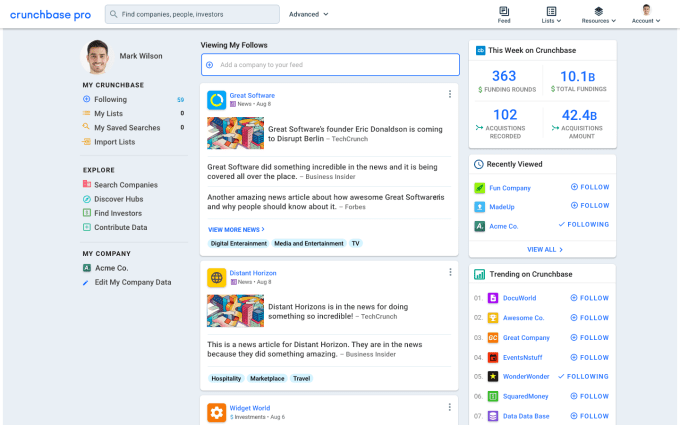 The company notes that it currently makes 3.9 billion annual updates to its data set — which people upload themselves in the old wiki style, or are manually or automatically uploaded, by way of some 4,000 data partnerships and syndication deals (these include the likes of Yahoo! Finance, LinkedIn, Business Insider and Amazon Alexa, which in turn make some 1.6 billion annual calls to the Crunchbase API).

The growth of that information trove, and more interesting ways of parsing it to drive subscriptions and potential licensing revenues, will be of paramount importance to the company’s bottom line. Today there is some advertising on the site, but McConnell confirmed to me that Crunchbase is in the process of winding down advertising on the platform.

“The impact on the business was not material enough to sacrifice the user experience to have ads,” he said.

On the subject of the self-styled LinkedIn comparison, you’ve probably already noticed that LinkedIn does have company profile pages, but McConnell’s argument is that the site was built with individuals’ profiles and recruitment in mind. That makes the company pages more of an add-on and not something that can be effectively developed at this point in the way that Crunchbase has done.

“Once you do that, it’s hard to change,” he said of the direction that LinkedIn has grown. “Its company profiles are more brand representations, not a source of truth about the companies themselves.”

What’s interesting to me is to see which direction Crunchbase will evolve in the longer term. As the world has continued to grow into the bigger vision of “every company is a tech company, and every problem has a tech solution,” it seems that Crunchbase’s own ambitions have also grown.

In the company’s blog post and press release announcing the fundraise, it’s notable to me that the word technology, or any variation of it, isn’t mentioned even once in the text (the only exception being the boilerplate description of Omers).

That could point to how — as Crunchbase expands its horizons in terms of the kinds of information on businesses it can provide to users — it might see a role for itself not unlike that of LinkedIn, spanning across multiple verticals and the communities of people (or in CB’s case, businesses) that have built around them.

“We are thrilled to partner with Jager and the talented leadership team at Crunchbase,” commented Michael Yang, managing partner at OMERS Ventures, in a statement. “Crunchbase continues to show significant traction as the leader in research, information, and prospecting for private companies – an incredibly large and valuable market to address and service. By utilizing and collecting aggregated data, adding tools and apps, and continuing to customize each user experience, the lead generation and deal value Crunchbase can provide is unprecedented, and we are proud to support this next phase of growth.”