“These $250 earbuds are nice.” That’s the first thing I wrote to a co-worker after unboxing and trying on the new AirPods. After wearing them around the New York City streets, the subway and into a couple of cafes, that pithy review stands.

Here are a few more words: They’re super comfortable. I’ve used a lot of different Bluetooth earbuds. It’s a weird perk of my job. The AirPods Pro (baffling pluralization aside) are probably the most comfortable, with the possible exception of the Powerbeats Pro, another Apple-manufactured joint venture. That one, however, relies on a lot more plastic to get the job done, with a full over-the-ear hook system.

The new AirPods, on the other hand, just hang comfortably. This is a big win for those who’ve experienced ear discomfort from all sort of different designs. [Sheepishly raises hand.] Granted, every ear is like a beautiful, unique snowflake, and not everyone will have the same experience. That said, the company’s clearly done a lot to correct for the complaints about the original AirPods, using both a more ergonomic design and finally giving in to the sway of silicone tips. 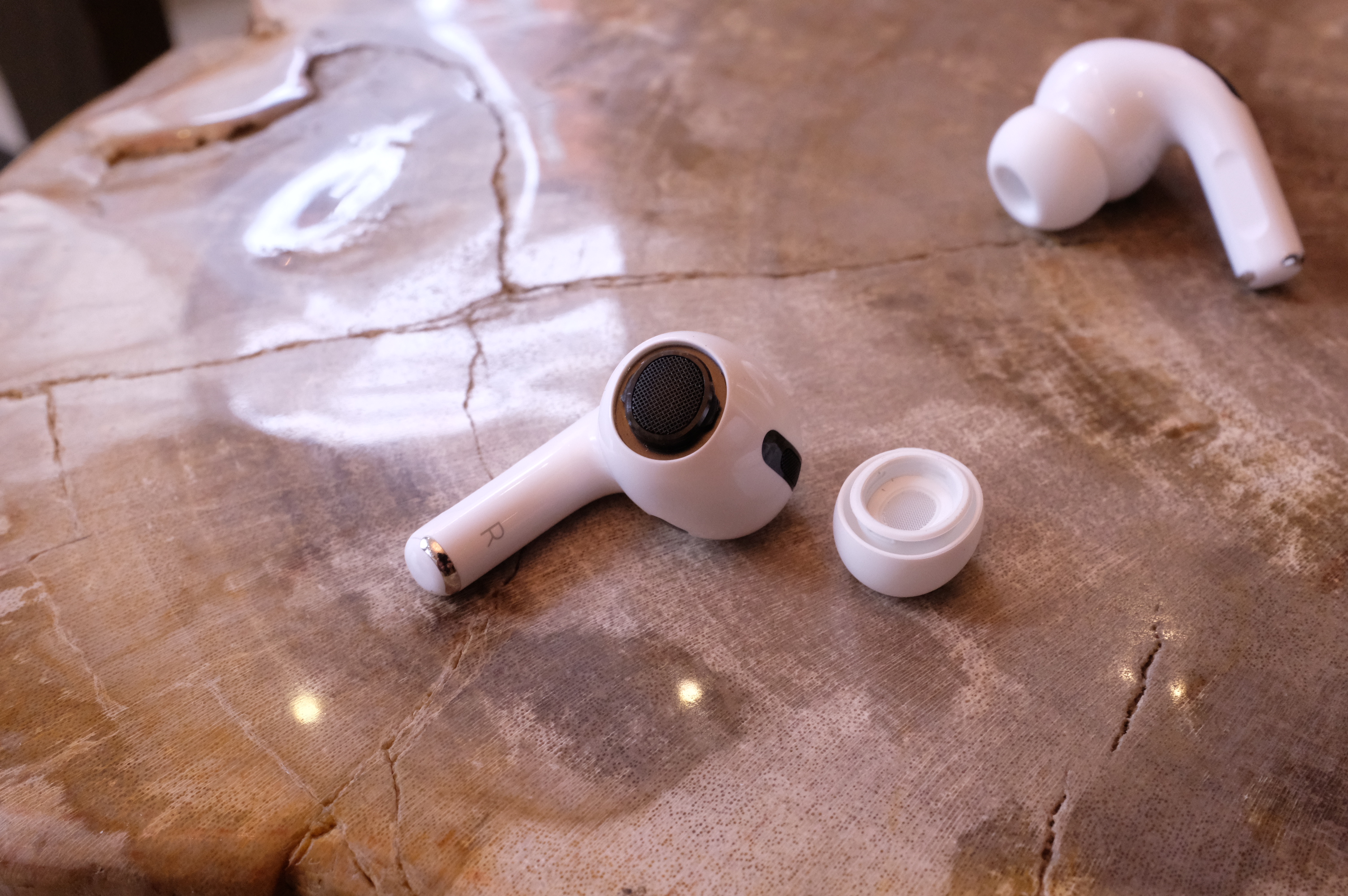 Why Apple waited this long on the latter bit is beyond me, but the company has finally done so on its own terms. Each Pro box ships with a total of six tips (a right and left in small, medium and large), with the medium on by default. These, however, are not your standard, run of the mill silicone tips. A firm yank will pull them off to reveal a hard outer edge that snaps into the bud [picture above].

The company says this is part of ensuring a better fit. Another benefit is that the attachment is much more secure. This is a definite plus, speaking as someone who has accidentally littered the streets of New York with earbud tips. These are far less likely to fall off while getting them out of your pocket. If you do lose one, Apple will be selling replacements for probably a buck or so.

Along with an enlarged body, you’ve no doubt noticed that the stems are notably shorter. That’s because the company has been able to consolidate more of the electronics into the top. The stem remains as a way of handling the earbuds. It also now houses a haptic button that replaces the standard AirPod tap interaction. Instead, you give the stem a squeeze, triggering a subtle clicking sound in the process. 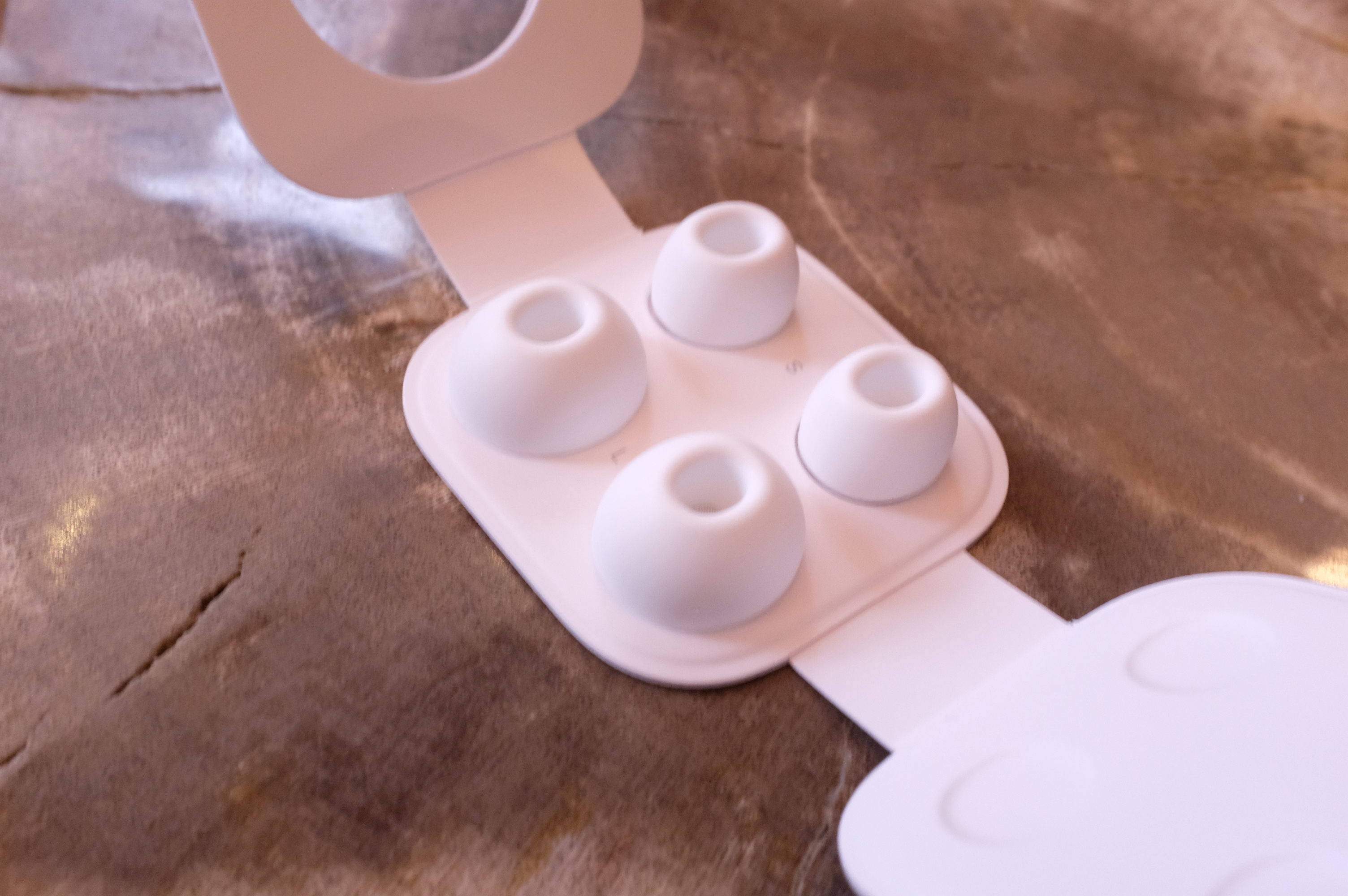 By default, a single squeeze pauses and plays a track, whereas a squeeze and hold cycles between noise cancellation and transparent modes. All of this can be adjusted in iOS, once you’ve downloaded version 13.2. Setup on iOS is as easy as ever, requiring you to simply open the case near an iPhone or iPad. Android and desktop pairing, meanwhile, involves the more standard Bluetooth setup. 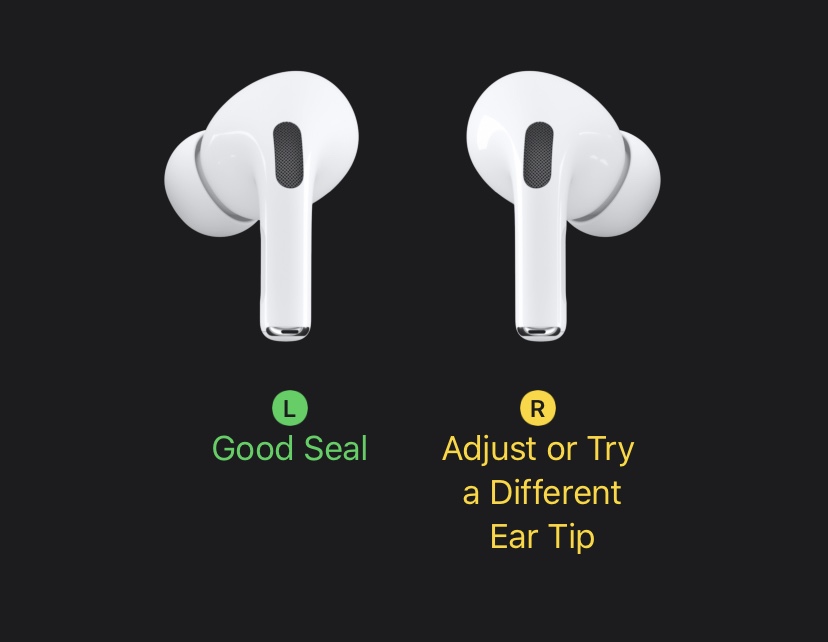 From there, click into Settings > Bluetooth > and then tap the “i” next to AirPods Pro. From here you switch between noise control modes, assign different functions to the button on the individual AirPods and fire up the Ear Tip Fit Test. Hit “play” and it will start a quick snippet of a song used to test the fit. If you have the right tip on, it will display “good seal.” If something is wrong, it recommends trying a different tip or adjusting the bud in ear.

Not only is every ear different, but some folks have a deal of differentiation between right and left. The mediums worked well for me, right out of the box. That’s me, Mr. Average Ears. Results may very.

The Pros sound great. They’re among the best-sounding earbuds I’ve tried, up there with the similarly priced Sony WF-1000XM3. As such, they’re in pretty rare air. Unlike the Echo Buds, you can’t adjust the levels in settings, but Apple’s buds are tuned well out of the box for a wide range of genres. So far, I’ve listened to Ryuichi Sakamoto, Danny Brown, The Hold Steady, Electric Youth and Sunn 0))), for a pretty diverse sampling. It all comes across rich and full — much as one would expect/hope from a $250 pair of earbuds. 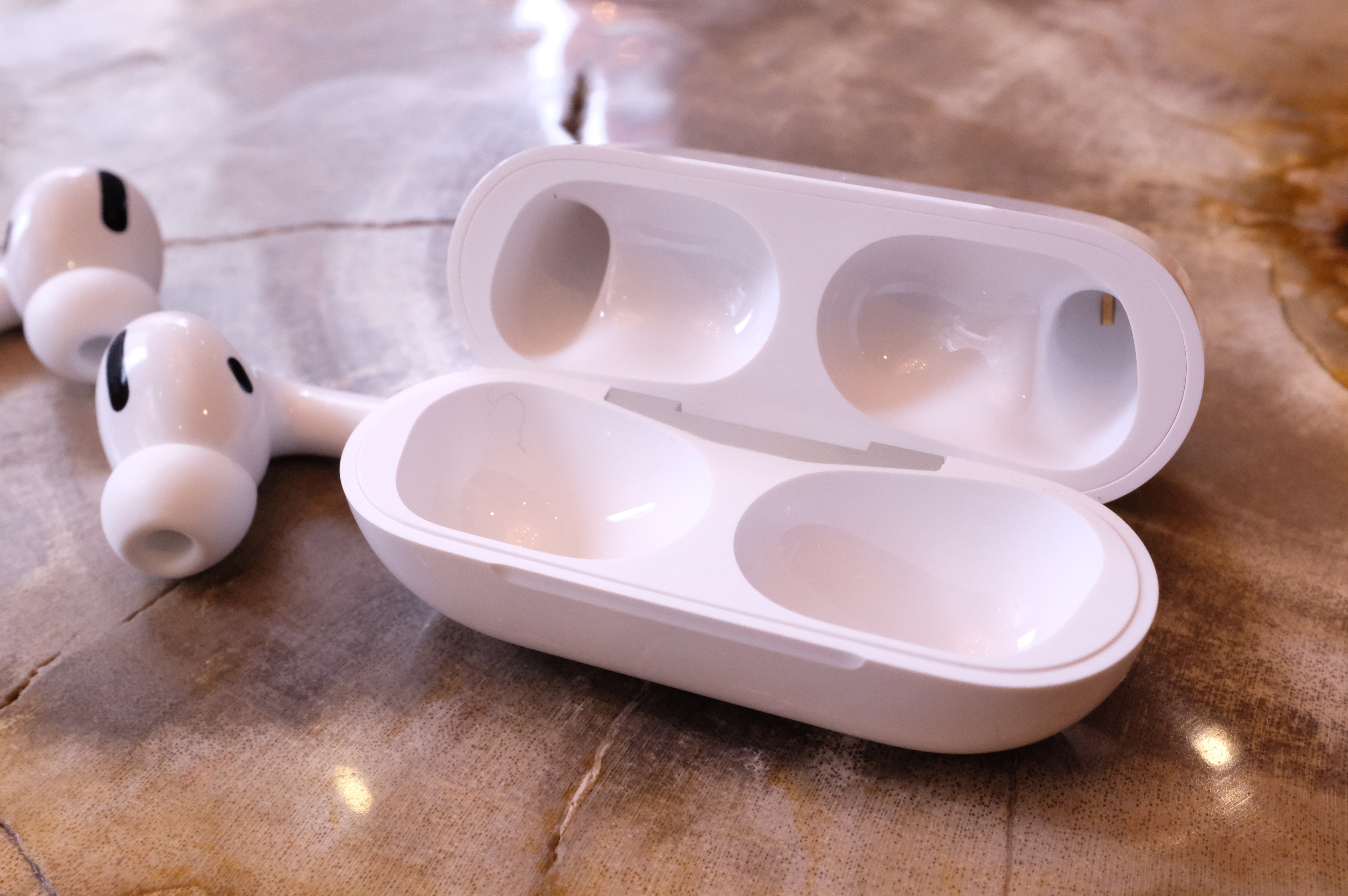 The noise canceling, too, is up there with Sony’s. Apple’s works adaptively, similar to what it offers on its over-ear Beats headphones. That means the microphones are constantly listening to your surroundings and adjusting accordingly. It’s not quite a full immersion, like you would get from over-ear headphones, but with a tight seal, it does a pretty terrific job drowning out your surroundings when needed.

For those times you need to be more alert, there’s transparency mode, which uses the on-board mics to beam in ambience. Once again, it’s a good mix, letting in sound without completely overwhelming the music. That was one of my issues with the Echo Buds, which tended to overamplify things like an air conditioning unit. Though again, unlike the Echo Buds, you can turn transparency on an off, versus adjusting levels.

Bit of a side note here, but like their predecessors, these new models will probably go a ways toward shifting societal norms in terms of keeping your headphones in while engaging with others. These are the sorts of things that make me want to go all Andy Rooney on kids today, etc., etc. 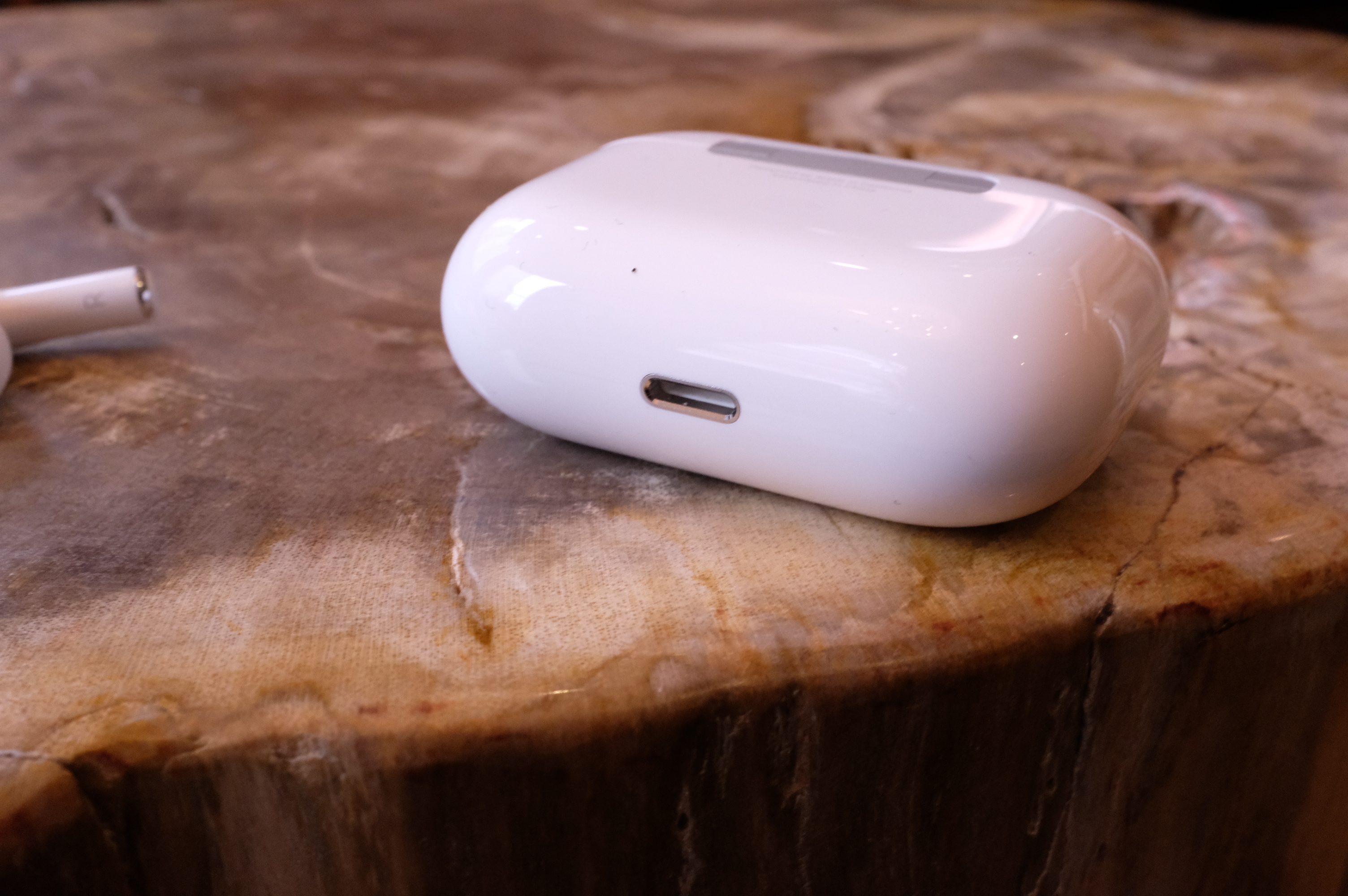 Noise canceling and transparency have similar impacts on battery, knocking about half an hour off of the Pods’ built-in five hours. With the charging case factored in, total listening time should be about 24 hours in standard mode, per Apple’s estimates. I’m excited to push that to the limit as I board a plane to Asia early next week. Ditto for the comfort level — but after several hours today, all is still well.

The case is a little larger than the original AirPods, but is still carried comfortably in a pocket, unlike, say, the Beats or Sony models. The orientation has shifted, as well. It’s not wider than it is long, owing to the shortening of the AirPods’ stems. The new design means they’re slightly more difficult to maneuver into the case, but you’ll get the hang of that after a couple of tries. 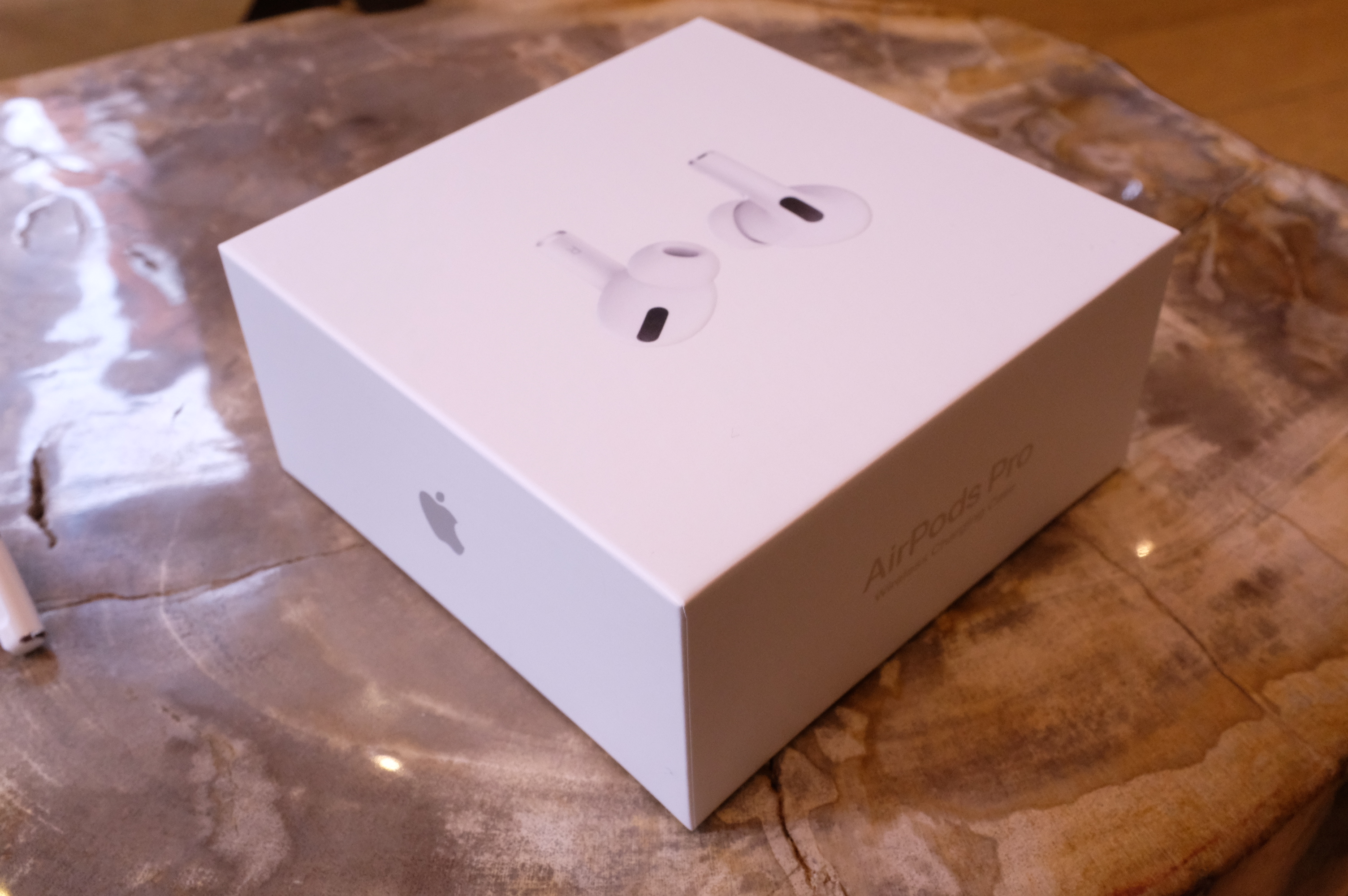 Like the AirPods 2, the case can be charged both through the Lightning port or wirelessly. Tapping the case while charging will light up the LED, which will display as either yellow or green to let you know how far along your are.

So, yeah, thumbs up after half a day. No surprise there, of course. The $250 price tag will almost certainly make these cost-prohibitive for many, but after a few hours, it’s going to be hard to go back.

Look for a longer write up soon.