The new startup, founded by InVision’s former head of enterprise sales Ryan Neu, is another standout from Y Combinator’s latest batch. Contrary to the majority of those businesses, however, Vendr is already profitable.

In classic YC fashion, the company has created software to sell to other startups, and, as such, it was quick to gain the confidence of top venture capital investors. Headquartered in Boston, Vendr has raised a $2 million round led by F-Prime Capital, with participation from Ashton Kutcher’s Sound Ventures, Joe Montana’s Liquid 2 Ventures, Garage VC and angel investors including Canva co-founder and chief operating officer Cliff Obrecht and HubSpot COO JD Sherman.

The company offers subscription-based software, priced depending on company headcount, that helps fast-growing businesses buy and manage enterprise SaaS. In short, the product cuts the human out of the sales process, allowing companies to purchase or upgrade software using software. The goal isn’t to eliminate the sales profession, rather to put an end to “persuasion driven” sales, Neu explains, and to make enterprise software purchases as easy as consumer product purchases. 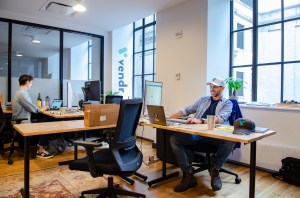 Founded 14 months ago, Vendr has reached $1 million in annual recurring revenue, which, for context, has historically been amongst the benchmarks necessary for a SaaS startup to raise its Series A. Neu says the company is growing 15% month-over-month with monthly recurring revenue currently sitting at $96,500. Already profitable, Neu says they want to put themselves in a position in which they don’t have to raise any additional outside capital.

“I can’t imagine looking at the bank account every month and watching it deplete,” Neu said. “We want to be in a position where we can control our own destiny.”

Sales professionals get a bad rap — Bravado wants to change that