Until today, the company was known as Mira, and it was founded by Tuan Ho (who previously founded internet TV company Philo), along with venture studio Atomic. The goal is to offer an alternative to existing digital signage solutions, which it says are often improvised, bespoke or expensive.

With Raydiant, customers just plug the company’s HDMI device into a TV or other screen and connect that device to the internet. Then they can edit and update the content from Raydiant’s online dashboard, and they get access to a number of other digital signage applications.

Customers include Westin, Ramada, Harvard University and Wahlburgers, the restaurant chain owned by the Wahlberg brothers. In fact, Raydiant/Mira was featured in an episode of the Wahlburgers TV show, with Mark Wahlberg testing out the technology as a way to create a virtual presence in Wahlburgers restaurants. 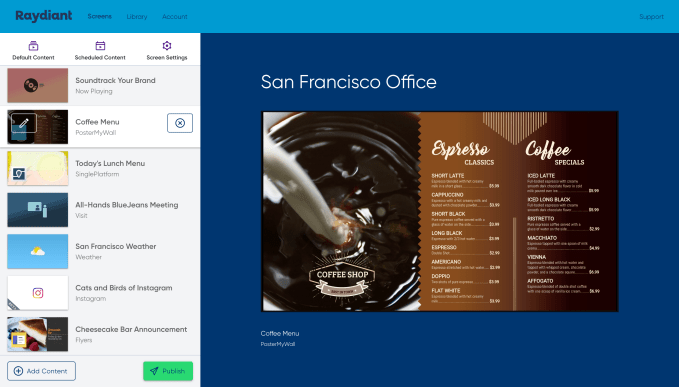 The new applications being announced today show the range of what customers can do with these screens — the partners include BlueJeans (videoconferencing), Soundtrack Your Brand (licensed music), SinglePlatform (digital menus) and PosterMyWall (drag-and-drop content editing).

Ho and Atomic have also brought on Bobby Marhamat, the former COO of Revel Systems, as Raydiant’s new CEO.

“We are thrilled to have so much energy around the company with everything from our new brand, the financial support from our investors and incredible partnerships with the industry’s top enterprise companies,” Marhamat said in a statement. “Raydiant is a thriving and growing company, and we are committed to providing businesses with first-class service to bring any screen to life and create an interactive experience within a brick & mortar location.”

Lastly, the company is announcing that it has raised $7 million in funding led by 8VC, with participation from Atomic, Bloomberg Beta, Lerer Hippeau, SV Angel and Transmedia Capital. It says the money will be used to develop new applications, sign more partners, grow the team and bring on more customers.