Platform power is a helluva a drug. Do a search on Google’s Play Store in Europe and you’ll find the company’s own Gboard app has an age rating of PEGI 3 — aka the pan-European game information labelling system which signifies content is suitable for all age groups.

PEGI 3 means it may still contain a little cartoon violence. Say, for example, an emoji fist or middle finger.

Now do a search on Play for the rival Fleksy keyboard app and you’ll find it has a PEGI 12 age rating. This label signifies the rated content can contain slightly more graphic fantasy violence and mild bad language.

The discrepancy in labelling suggests there’s a material difference between Gboard and Fleksy — in terms of the content you might encounter. Yet both are pretty similar keyboard apps — with features like predictive emoji and baked in GIFs. Gboard also lets you create custom emoji. While Fleksy puts mini apps at your fingertips.

A more major difference is that Gboard is made by Play Store owner and platform controller, Google. Whereas Fleksy is an indie keyboard that since 2017 has been developed by ThingThing, a startup based out of Spain.

Fleksy’s keyboard didn’t used to carry a 12+ age rating — this is a new development. Not based on its content changing but based on Google enforcing its Play Store policies differently.

The Fleksy app, which has been on the Play Store for around eight years at this point — and per Play Store install stats has had more than 5M downloads to date — was PEGI 3 rating until earlier this month. But then Google stepped in and forced the team to up the rating to 12. Which means the Play Store description for Fleksy in Europe now rates it PEGI 12 and specifies it contains “Mild Swearing”.

The Play store’s system for age ratings requires developers to fill in a content ratings form, responding to a series of questions about their app’s content, in order to obtain a suggested rating.

Fleksy’s team have done so over the years — and come up with the PEGI 3 rating without issue. But this month they found they were being issued the questionnaire multiple times and then that their latest app update was blocked without explanation — meaning they had to reach out to Play Developer Support to ask what was going wrong.

After some email back and forth with support staff they were told that the app contained age inappropriate emoji content. Here’s what Google wrote:

During review, we found that the content rating is not accurate for your app… Content ratings are used to inform consumers, especially parents, of potentially objectionable content that exists within an app.

For example, we found that your app contains content (e.g. emoji) that is not appropriate for all ages. Please refer to the attached screenshot.

In the attached screenshot Google’s staff fingered the middle finger emoji as the reason for blocking the update:

“We never thought a simple emoji is meant to be 12+,” ThingThing CEO Olivier Plante tells us.

With their update rejected the team was forced to raise the rating of Fleksy to PEGI 12 — just to get their update unblocked so they could push out a round of bug fixes for the app.

That’s not the end of the saga, though. Google’s Play Store team is still not happy with the regional age rating for Fleksy — and wants to push the rating even higher — claiming, in a subsequent email, that “your app contains mature content (e.g. emoji) and should have higher rating”.

Now, to be crystal clear, Google’s own Gboard app also contains the middle finger emoji. We are 100% sure of this because we double-checked… 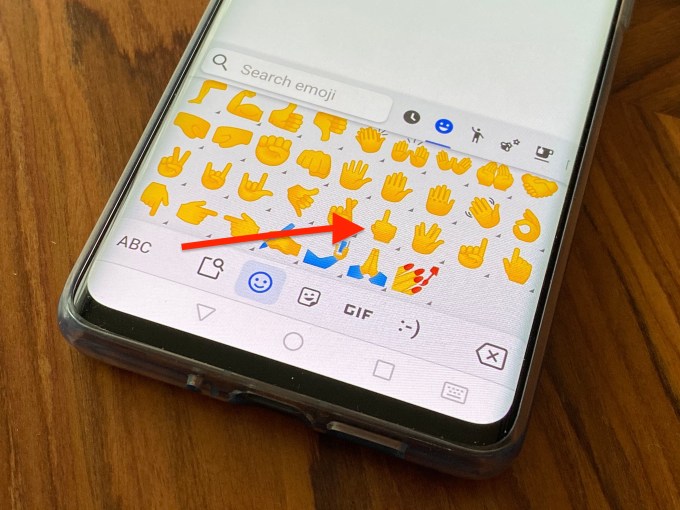 This is not surprising. Pretty much any smartphone keyboard — native or add-on — would contain this symbol because it’s a totally standard emoji.

But when Plante pointed out to Google that the middle finger emoji can be found in both Fleksy’s and Gboard’s keyboards — and asked them to drop Fleksy’s rating back to PEGI 3 like Gboard — the Play team did not respond.

A PEGI 16 rating means the depiction of violence (or sexual activity) “reaches a stage that looks the same as would be expected in real life”, per official guidance on the labels, while the use of bad language can be “more extreme”, and content may include the use of tobacco, alcohol or illegal drugs.

And remember Google is objecting to “mature” emoji. So perhaps its app reviewers have been clutching at their pearls after finding other standard emojis which depict stuff like glasses of beer, martinis and wine… 🤦‍♀️

Over on the US Play Store, meanwhile, the Fleksy app is rated “teen”.

Plante says the double standard Google is imposing on its own app vs third party keyboards is infuriating, and he accuses the platform giant of anti-competitive behavior.

“We’re all-in for competition, it’s healthy… but incumbent players like Google playing it unfair, making their keyboard 3+ with identical emojis, is another showcase of abuse of power,” he tells TechCrunch.

A quick search of the Play Store for other third party keyboard apps unearths a mixture of ratings — most rated PEGI 3 (such as Microsoft-owned SwiftKey and Grammarly Keyboard); some PEGI 12 (such as Facemoji Emoji Keyboard which, per Play Store’s summary contains “violence”).

Only one that we could find among the top listed keyboard apps has a PEGI 16 rating.

This is an app called Classic Big Keyboard — whose listing specifies it contains “Strong Language” (and what keyboard might not, frankly!?). Though, judging by the Play Store screenshots, it appears to be a fairly bog standard keyboard that simply offers adjustable key sizes. As well as, yes, standard emoji.

“It came as a surprise,” says Plante describing how the trouble with Play started. “At first, in the past weeks, we started to fill in the rating reviews and I got constant emails the rating form needed to be filled with no details as why we needed to revise it so often (6 times) and then this last week we got rejected for the same reason. This emoji was in our product since day 1 of its existence.”

Asked whether he can think of any trigger for Fleksy to come under scrutiny by Play Store reviewers now, he says: “We don’t know why but for sure we’re progressing nicely in the penetration of our keyboard. We’re growing fast for sure but unsure this is the reason.”

“I suspect someone is doubling down on competitive keyboards over there as they lost quite some grip of their search business via the alternative browsers in Europe…. Perhaps there is a correlation?” he adds, referring to the European Commission’s antitrust decision against Google Android last year — when the tech giant was hit with a $5BN fine for various breaches of EU competition law. A fine which it’s appealing.

“I’ll continue to fight for a fair market and am glad that Europe is leading the way in this,” adds Plante.

Following the EU antitrust ruling against Android, which Google is legally compelled to comply with during any appeals process, it now displays choice screens to Android users in Europe — offering alternative search engines and browsers for download, alongside Google’s own dominate search  and browser (Chrome) apps.

However the company still retains plenty of levers it can pull and push to influence the presentation of content within its dominant Play Store — influencing how rival apps are perceived by Android users and so whether or not they choose to download them.

So requiring that a keyboard app rival gets badged with a much higher age rating than Google’s own keyboard app isn’t a good look to say the least.

We reached out to Google for an explanation about the discrepancy in age ratings between Fleksy and Gboard and will update this report with any further response. At first glance a spokesman agreed with us that the situation looks odd.

Update: The day after we published this article, and after Fleksy had also contacted the International Age Rating Coalition to support its rating review, the startup got back in touch to tell us Google’s Play team had restored its PEGI 3 rating. 💪