The release of a new Terminator sequel has become a familiar ritual: The latest filmmakers acknowledge the greatness of the first two movies, then mumble awkwardly about the other sequels — which are inevitably ignored, because they assure us that this time, they’ve created the sequel we’ve been waiting for.

I can’t tell you whether “Rise of the Machines,” “Salvation” or “Genisys” deserve to be dismissed so completely, because I haven’t seen them. (I did watch the pretty-good TV spin-off, “The Sarah Connor Chronicles.”) But I can say that the latest installment, “Terminator: Dark Fate, delivers on the promise of a worthy sequel.

It helps that some familiar names have returned behind and in front of the camera — not just Arnold Schwarzenegger, but also Linda Hamilton, who takes up the role of Sarah Connor for the first time since “Terminator 2.” And then there’s franchise creator James Cameron, who was apparently too busy with his “Avatar” sequels to direct (“Dark Fate” was helmed by “Deadpool”‘s Tim Miller instead), but who stayed involved as a producer and story writer.

Not that the story is really the selling point: The big emotional moments can feel clumsy and rushed, and some of the dialog is genuinely groan-worthy.

All the script really needs to do, though, is give us a reason for those familiar faces to be back on-screen together, and to convince us that it’s not totally pointless to watch another Terminator movie. In that, it succeeds — with a few nods toward the changing technological and political landscape thrown in for good measure. 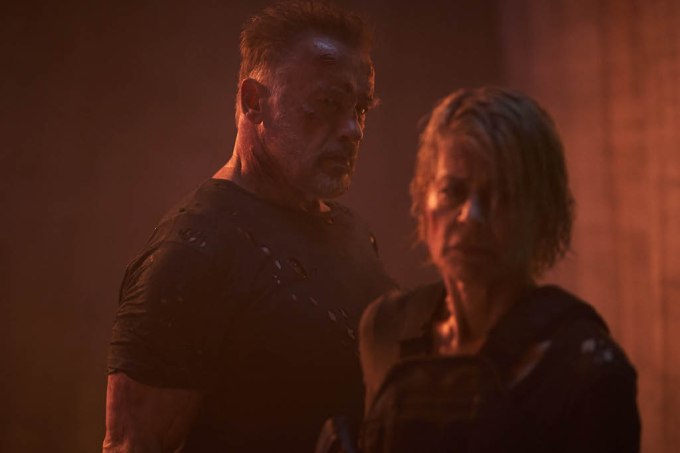 In the film’s opening minutes, we learn that Sarah and John Connor’s efforts at the end of “Terminator 2: Judgment Day” have succeeded in averting a nuclear apocalypse. However, for reasons that only become clear later, those pesky Terminators keep showing up.

The story proper kicks off in Mexico City, where a young woman named Dani Ramos (played by Natalia Reyes) becomes the latest target of a cyborg assassin. Her pursuer (Gabriel Luna) is an advanced model whose skin and skeleton can function as two separate bodies, and she’s saved by not one but two protectors — Sarah Connor, along with a cybernetically enhanced soldier named Grace (Mackenzie Davis), plus the late-film addition of an old-model Terminator (Schwarzenegger, naturally).

There are more revelations, but one of the best things about “Dark Fate” is the simplicity of its storytelling. Like its first two predecessors, it doesn’t overcomplicate the formula: There’s a killer cyborg, an innocent target and an overmatched guardian; mayhem ensues.

It’s in the depiction of that mayhem that “Dark Fate” excels. The film has plenty of CGI (I’d argue too much), but it feels very different from the weightless, super-powered battles that have become the big-screen norm, and even from the balletic killing sprees of the “John Wick” movies.

Just got out of a screening of #terminatordarkfate. Didn’t know the person next to me, but as the credits rolled, we both turned to each other and declared, “That was AWESOME.”

Instead, the action in “Dark Fate” feels like a throwback, specifically to those Cameron-directed Terminator movies, where a great deal of thought and ingenuity was devoted to coming up with all the different ways that a relentless murder machine might wreak havoc.

Hamilton, by the way, seems completely at home in these scenes. And although Schwarzenegger’s performance was gratifyingly funny and loose, “Dark Fate” is absolutely her film.

Meanwhile, I’m still a little fuzzy on how Luna’s Rev-9 actually works, but it makes for a striking and unsettling visual. The finale, in particular, masterfully escalates the jeopardy and destruction, as Rev-9 tears through one environment after another in pursuit of our increasingly desperate heroes — almost convincing you that this time, the Terminator really might be unstoppable.

I don’t want to overstate the case here: “Dark Fate” (which opens November 1) doesn’t quite replicate the perfect mix of violence, terror and melancholy that made those first two films so memorable. But it can hold its own in a fight.