North Carolina has been rising as an entrepreneurial hub. It’s now home to massive deals, like IBM buying Red Hat for $34 billion and Fortnite maker Epic Games raising a landmark $1.25 billion, both which helped to put the state — and the Triangle region, in particular — on the map. And now it has just minted another unicorn with Pendo’s last fundraise. But its tech hub potential can still be threatened by the state’s political swings, said Salesforce Ventures head John Somorjai, who spoke today at a tech event in Durham.

On a panel at Bull City Venture Partners’s Entrepreneurs’ Series 2019, Somorjai reminded the audience that investment in the state follows the talent. And a state can’t attract talent when it’s not “welcoming to all people,” he said.

North Carolina has had a difficult history on this front, if you recall.

In 2016, PayPal canceled plans to open a global operations center in Charlotte after N.C. passed the controversial (“bathroom bill”) law that prevented cities from creating non-discrimination policies based on gender identity. The state lost 400 potential jobs as a result. More than 100 other companies, including Apple, Google, Twitter, Facebook, eBay, Uber and others also asked the state to repeal the law after its passing.

N.C. eventually revised the law, then reached a settlement this summer that allows transgender people to use certain bathrooms matching their gender identity. But in some cases, it was too late to woo the tech companies back.

Apple and Amazon have also been separately criticized, at times, for considering N.C. area investments because of the state’s anti-LGBTQ leanings.

This issue now has a broad effect on the state’s ability to attract tech and business investment at a time when investors are often looking outside the Valley (and its obscene valuations) to find companies that are more focused on profitability. 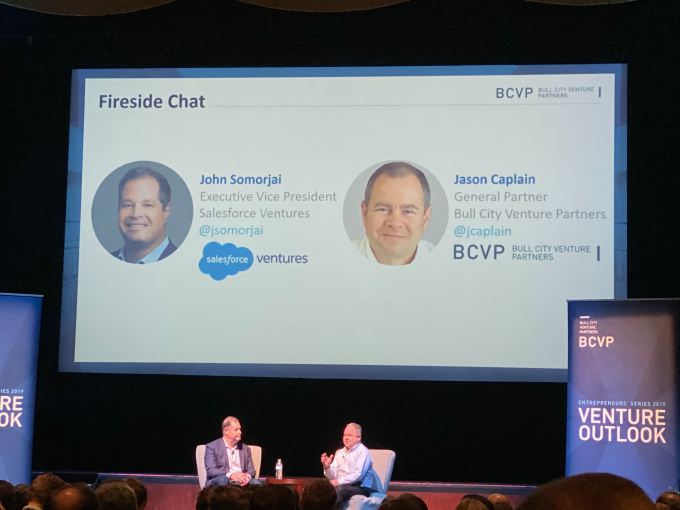 Salesforce Ventures, a strategic investor who keeps its stake below 15%, isn’t hesitant to fund companies beyond Silicon Valley — it has five investments in N.C. and 15 overall in the larger region, for example. And 75% of its investments were made outside of California, Somorjai noted.

But when asked what North Carolina’s biggest challenge was, in terms of becoming home to a startup community, he alluded to the state’s politics and its history of divisive laws.

“Before the last election, there was an environment here that wasn’t really welcoming to all people,” Somorjai said. “One of [Salesforce’s] core tenants — our core values — is equality. And there’s really sound business sense behind that,” he explained. “If you have discriminatory policies, people don’t feel welcome. If they don’t feel welcome, they’re not going to want to work there. And you will never be able to attract the best talent.”

“Money flows to where the talent is,” he added.

He also suggested to the event’s audience — a group of some 450 entrepreneurs and hundreds more working in the area’s startup ecosystem — that local community leaders should remain vigilant about these sorts of problems.

“If you’re complacent, it can happen again,” he said.

Despite the concerns, Somorjai was generally positive about the ability for strong startups to arise in N.C.

Salesforce Ventures itself invested in two N.C. area unicorns — Pendo and nCino — and it just acquired Charlotte-based MapAnything, which gives it some 200 new employees in the Tar Heel state. Elsewhere in N.C., startups AvidXchange, Red Ventures and Tresata all have unicorn valuations.

“One thing we’ve been so excited about is — you have these tremendous universities that are putting out great engineers every year. And you have a growing group of investors that are investing in this area. There’s also now so much talent here that you’re attracting investors from all over the country,” he told the audience. “I think that’s great.”