Nigeria’s #StopRobbingUs campaign to curb police harassment of techies could grow into a formal lobbying group for the country’s tech sector, according to founders Bosun Tijani and Jason Njoku.

Tijani, the CEO of Lagos-based innovation center CcHub and now Kenya’s iHub, helped spearhead the movement last month in response to detainment and extortion of tech workers by local authorities.

He joined Njoku — CEO of Nollywood VOD venture IROKO — and 29 other Nigerians to release a statement condemning police abuse of the country’s tech workers.

The language called for “an end to the common practice where Nigerian police stop young people with laptops and unlawfully arrest, attack or, in extreme circumstances, kidnap them, forcing them to withdraw funds from their bank accounts in order to regain their freedom.”

The campaign coined the #StopRobbingUs hashtag as a digital rallying point.

The statement went on to say the #StopRobbingUs movement would “consider a Class Action Lawsuit on police brutality.”

Energy for the campaign reached critical mass after Toni Astro, a Lagos-based software engineer, was reportedly beaten, arrested, detained and then extorted out of money by Nigeria’s Special Anti-Robbery Squad [SARS] the last week of September. He tweeted about the ordeal. 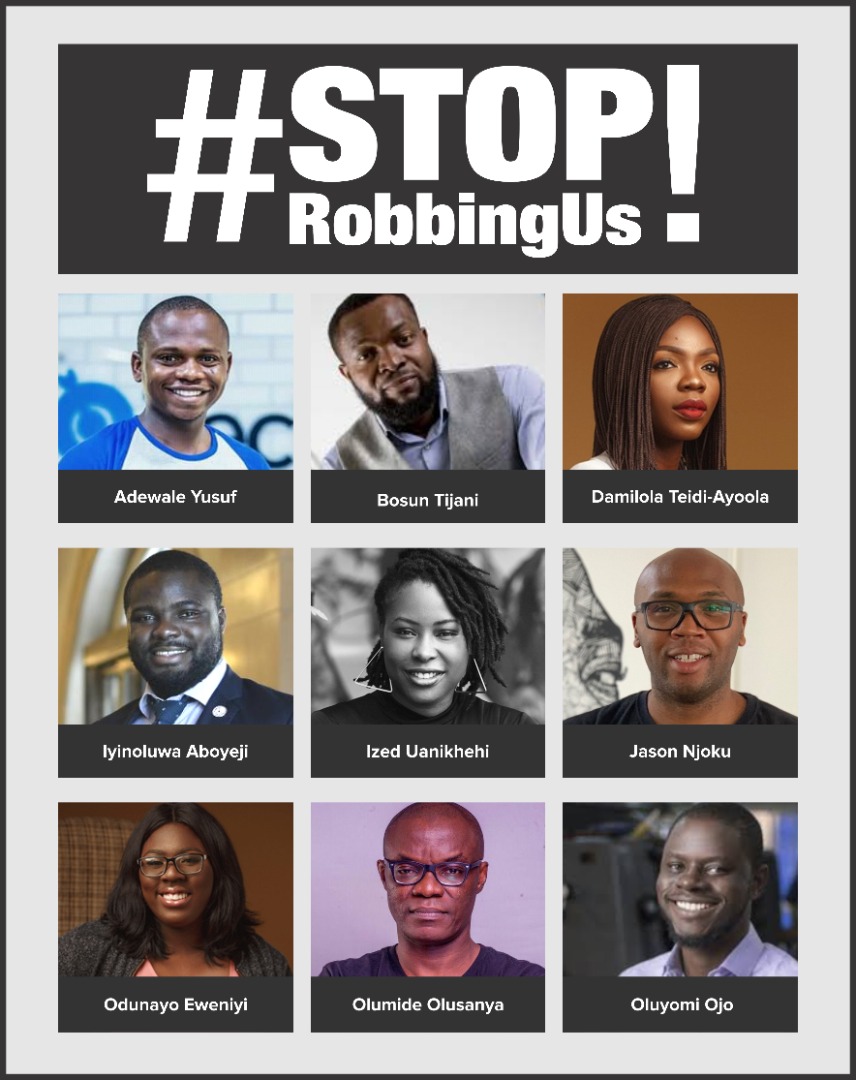 On the impetus for forming #StopRobbingUs, “We just got tired of [the harassment]. I personally got tired of it, which is why I spoke out and with other people decided to take action,” Tijani told TechCrunch on a call.

He described the shakedown of techies as the best and worst of Nigeria colliding, when it comes to shifting perceptions and stereotypes of the country.

“They’re taking one of the most positive things that’s happening on the continent, but also Nigeria in the last 10 years, and turning it into self-destruction,” Tijani said of the law enforcement maltreatment of tech sector workers.

“It’s a gross abuse of police stop and search…The people that are supposed to protect us are ultimately harassing us and robbing us,” IROKO CEO Jason Njoku said of the profiling and extortion of Nigerians with laptops and smartphones.

He characterized the theft of laptops as taking away the means for techies to earn a living.

“A lot of people can work around not having a laptop, but if you’re a developer, how do you code without a laptop,” he said.

Njoku, Tijani and members of #StopRobbingUs have been talking to senior members of Nigerian President Muhammadu Buhari’s Enabling Business Environment task force and the governor of Lagos State — the geographic district in Nigeria where much of the country’s tech activity takes place.

“We’re looking to set up some kind of fund, which does advocacy and…also lines up lawsuits…to force the issue in a more formal way,” said Njoku.

“It’s also an education thing. We’re reaching out to the powers that be, to engage and educate them to find some kind of solution to this.”

Both Njoku and Tijani see the #StopRobbingUs movement as a forerunner to an innovation industry advocacy group in Nigeria to speak to the broader needs of the country’s tech community.

The West African country is home to the continent’s largest economy and largest population (200 million).

In addition to still being known for large-scale and petty corruption, Nigeria has made strides in improving infrastructure and governance and has one of Africa’s strongest tech scenes.

The country is now a focal point for VC, startup formation and the entry of big global tech companies in Africa.

“I still see a bright future for fintech and internet companies in Nigeria. I think it makes sense for us to be much more vocal on the things that may or may not make sense to us. Technology, media and entertainment right now is the hope for a lot of young people in this country,” Njoku said.

He added his company, IROKO, and startups he’s invested in account for roughly 1,000 jobs.

“We’ll get to the point where tech will become one of the biggest drivers of employment in this country,” Njoku said. “It makes sense for us to demand the respect and recognition from government to…do the right thing to give us that fertile ground to keep building these companies.”

CcHub’s Bosun Tijani is in accord with Njoku on the necessity of a tech industry advocacy group in Nigeria.

“We do need a voice at the table, a voice that can contribute to getting what we need from government…and the #StopRobbingUs campaign may be the trigger,” he said.