When Arianna Huffington stepped down from her role at the Huffington Post to start Thrive Global, she said the goal of her new business was to help a generation “avoid the burnout that all too often comes with success today.”

In practice, that has meant creating a business that sells mindfulness and general health and wellness tips and tricks to a cohort of corporations that believe increased mental and physical health can lead to greater on-the-job productivity.

Now, Thrive Global is adding a tech tool to its arsenal of cognitive behavioral therapies with the acquisition of the Los Angeles-based startup, Boundless Mind.

Originally called Dopamine Labs, the company was founded in 2015 to bring some of the same technologies that social media companies like Facebook used to boost engagement to a broader range of applications.

Terms of the deal were not disclosed, but the stock and cash acquisition will see all nine members of the current Boundless team join Thrive Global. Previous Boundless investors including Revolution’s Rise of the Rest Seed Fund and Esther Dyson will join Thrive Global’s cap table.

“We were very impressed by their neuroscience-based artificial intelligence that they used to power changes in behavior,” says Huffington. “We can use technology that hooks people to unhook them from unhealthy behaviors.”

Boundless “epitomized the use of technology to encourage healthy habits,” Huffington says.

From Huffington’s perspective, most health problems in the U.S. are actually rooted in behavioral problems rather than biological ones. “Until 100 years ago, people died from infectious diseases… Now most people are dying from behaviors,” says Huffington, quoting Boundless Mind co-founder Dalton Combs.

The Boundless technology works by monitoring what activity is happening on the phone’s tap screen (similar to Apple’s screen time monitoring). What Boundless does on the back end is analyze that data and create prompts to encourage behavior — in much the same way that other companies’ apps have notifications to prompt re-engagement.

Going forward, the Boundless team is hoping to use more of the information coming from a phone’s increasing array of sensors to better refine its notifications. Results from the adoption of the company’s software vary, but Boundless points to data from apps spanning health, fitness, productivity, finance and e-commerce – including a 60% increase in walking, 30% increase in productivity and 21% increase in engagement around diet and exercise. 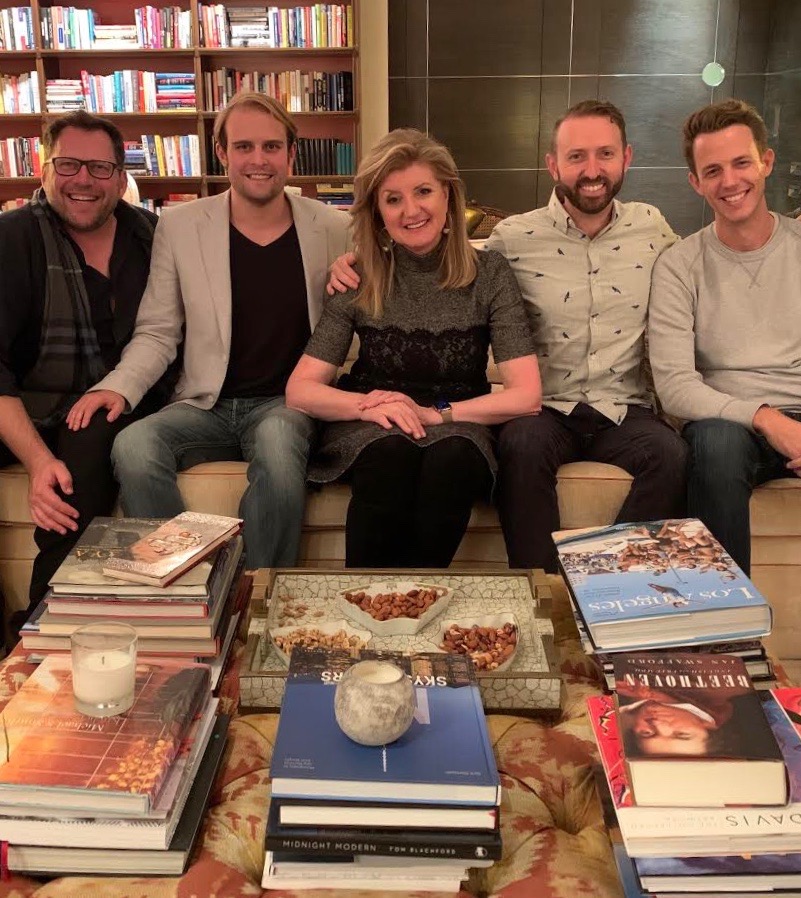 Arianna Huffington and the co-founders and staffers of Boundless Mind

Thrive Global has three pillars to its business: live workshops, a digital health program, and behavior change tools (like Boundless).

These kinds of correlations don’t mean causation and the company is still working to better quantify the benefits of adopting its workplace wellness protocols. One of the places where Thrive Global is putting its brain training regime to the test is in call centers in Central America,

“You can imagine how the Boundless integration will allow us to hyper-personalize,” says Danny Shea, Thrive Global’s chief brand officer. In call centers that could mean prompting an employee to take a break after a long or stressful call.

“We’re thrilled to see the continued growth and market expansion at Thrive Global” said Somesh Dash, General Partner at IVP and member of Thrive Global’s Board of Directors. “The combination of Thrive’s mission and Boundless Mind’s technology is truly remarkable and the integration will help Thrive scale a game-changing and differentiated behavior change technology platform to enterprises around the world.”