Today, a new book called “Girls Who Run the World” hits real and virtual bookshelves, and for anyone with a middle-school aged kid or looking to inspire a high-schooler, it might be worth checking out. Featuring 31 women who are the CEOs of companies that they have created themselves — think Spanx, Glossier, Caribou Sciences and Stitch Fix — each of their stories underscores that dreams sometimes can be made into reality when you want something badly enough.

We talked yesterday with the book’s author, Diana Kapp, a longtime essayist (with an MBA from Stanford) who authored the book in part to encourage her own teenage daughter to pursue her passions while making clear there will be obstacles, always, to overcome.

TC: You have an interesting and fairly broad mix of powerful women in this book. How did you choose who to profile?

DK: I went after stories that are compelling and innovative, while trying to ensure that not every woman has a degree from either Stanford or MIT.  I picked Anne Wojcicki because she’s a pioneer in the field of DNA testing. Nina Tandon of Epibone is working on growing artificial bones that can be put into the body. Christina Stembell of Farmgirl Flowers grew up on a farm and never went to college. Tracy Young was a construction project engineer who wound up selling her company to Autodesk. I could have written about 200 more women; there are so many good stories that are just not told.

TC: How much time did you spend with each of them?

DK: It really varied. I met some in person, like Tina Sharkey of Brandless and Christina (Stembell) and Kara Goldin of Hint Water. I interviewed a lot of them on the phone. I really wanted to tell the story of them taking an idea and having the guts to trust their own instincts and go after that idea, despite a lot of naysaying and difficulty fundraising. People thought Stitch Fix was an inventory nightmare, for example. At Minted, founder and CEO Mariam Naficy opened her online stationary store and not a single box sold for the first 40 days.

TC: Of the women you interviewed, who overcame the most?

DK: I love the story of Jesse Genet of Lumi, who became obsessed with screen printing in high school and would use every birthday to ask for some esoteric piece of printing equipment, finding out along the way about some light-activated agent that you could use for printing and driving six hours to get this product out of someone’s basement. Today, her company provides packaging to a growing number of consumer companies, from Rockets of Awesome to Blue Bottle Coffee, and I think she’s just brilliant.

Jennifer Hyman and Jenny Fleiss bought 100 dresses in their own sizes in case [Rent the Runway] didn’t work. Katrina Lake similarly bought clothes on her credit card, then sent them to friends and used paper and pencil to mark down feedback before hiring a TaskRabbit to help track that data. What’s important about all of these stories is that these women took steps that others can take, too. They started with tiny pilot programs. They aren’t the kids of entrepreneurs. They weren’t preordained to start companies. And while I might read about them in Fast Company or listen to podcasts about them, my 14-year-old doesn’t. I think it’s important for kids to learn about people who would not take no for an answer, who got turned down by 40 VCs and kept pitching. 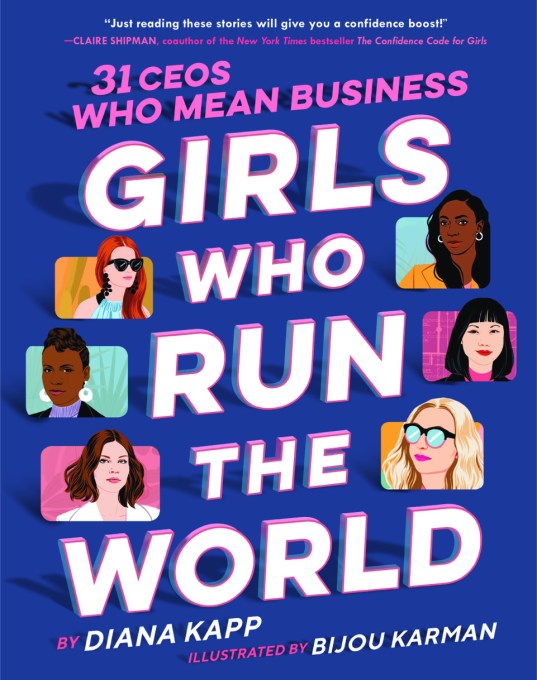 TC: You mentioned that you tried featuring women of different backgrounds. What were some of the unifying threads between them?

DK: One thing that does connect them is parents who ditched the idea of perfectionism. They let their girls take their own path. [PopSugar founder and president] Lisa Sugar’s parents let her stay up because she was obsessed with late-night TV, and that’s how she got into being a pop culture critic and wound up launching a blog that had a million readers within a year. Sara Blakely of Spanx told me her dad didn’t care what other people thought of him, which was a powerful idea for a kid to be marinating in; it gave her more freedom to be herself and to take her own path. Jesse [Genet] realized if she took two classes after the summer of her junior year in high school, she could graduate early and take her T-shirt printing business to LA, where she had data on the number of shops per block, and when she pitched her parents on these ideas, they listened to her. They let her take a non-traditional path.

TC: Did any or many of these founders take time off to raise their children?

DK: I don’t know that they took time off, but 18 of the 31 have children, and 10 of them have three or four children, so they’re managing to have big families. Katia Beauchamp ran Birchbox while on bedrest with her fourth child. SoulCycle’s founders brought their daughters to the studios they were opening up and had them pitch in. Kara Goldin, who was inspired to start her company after working in the software industry and gaining weight and drinking too much Diet Coke, really wanted to get [sales] going in Whole Foods before getting induced with her second child, so she brought bottles over to a local store [en route to the hospital]. When the stock guy called the next day to tell her all the cases were gone, she thought they’d been stolen.

I’m sure that like every parent, they feel the pull to spend time with their kids, but they are so turned on by what they are doing. You don’t [start a company] unless you have incredible passion for your idea because it’s so hard. And I love that they are having children but still chasing after something that’s meaningful to them and that they think society really needs. I think that’s a fantastic model for children.

TC: Were the people you’ve profiled helped by other women along the way? Is that an important piece of their stories?

DK: There is a lot of support going on; they definitely have a network. Many sit on each other’s boards or advisory committees. Katrina Lake is on Emily Weiss’s board [at Glossier]. Some of them sit on the board of [former model] Christy Turlington’s organization, Every Mother Counts.

Leslie Blodgett, who sold her company Bare Escentuals to Shiseido [in 2010 for $1.7 billion] is funding other women. She’s also now a student at Stanford and writing a book. She wants to have another chapter.