Thimble, which offers flexible, short-term insurance to small businesses and freelancers, is announcing that it has raised $22 million in a Series A funding round led by IAC.

Until today, the startup was known as Verifly, a name tied to the company’s initial aim of providing insurance to drone pilots. However, founder and CEO Jay Bregman (who previously founded ridesharing company Hailo) said that thanks to customer demand, the team kept adding insurance for different types of businesses — and now it’s rebranding to reflect that broader vision.

While it’s easy to talk about Thimble customers as being part of the “gig economy,” Bregman noted that these aren’t just people driving for Uber or delivering for Postmates — only 4% of the company’s customers identify as gig economy workers.

“There is this larger thing called the gig economy: People working in flexible ways, on their own terms,” he said.

In fact, Thimble now says it provides liability coverage for customers in more than 100 professions, including handymen, landscapers, DJs, musicians, beauticians and dog walkers. Policies can be purchased directly from the Thimble website or app by the hour, day, week, month or year. 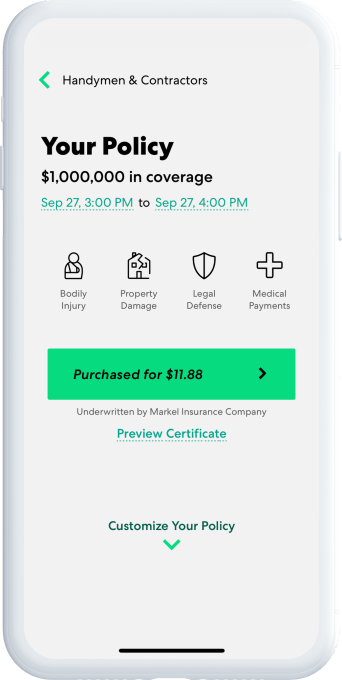 The idea, Bregman said, is that as work becomes shorter term and “more transactional,” it doesn’t make sense to buy an annual insurance policy. To illustrate that point, he noted that 75% of customers didn’t have insurance before buying from Thimble, and that 50% of customers are buying policies to cover a single day or less. And the company says it’s on track to sell 100,000 by the end of the year.

Thimble’s policies are underwritten by Markel, an insurance company that Bregman praised for its “infrastructure and talent.”

At the same time, he said, “We have always been the owner of the product itself. Basically, we worked with carrier partners to bring [our products] to market; the way we do that may evolve slightly as we get older and more mature.”

Thimble has received regulatory approval to sell insurance in 48 states so far. Asked whether the broader political debates about whether gig workers are employees could affect the company’s business, Bregman pointed again to the fact that the vast majority of Thimble customers don’t consider themselves gig workers.

“Our only fear here is that in trying to solve a very particular problem with long-term gig employment, that some of these laws may actually unintentionally scare off or capture legitimate freelancers,” he said.

As for the investment, IAC’s chief strategy officer Mark Stein acknowledged that the digital media holding company doesn’t make many early-stage, minority investments. But he said that deals like this are about “planting seeds.”

“What we think about at IAC is: How can we go about planting seeds of growth for the future? What will become the next ANGI Homeservices? What will become the next Match Group?” Stein said, alluding to two IAC-owned businesses that may get spun off. “We need to find these kinds of large, addressable market opportunities now in the hopes of creating very large, industry-changing companies in the future.”