NASA revealed new spacesuits, specifically created for the Artemis generation of missions, which aim to get the first American woman and the next American man to the surface of the Moon by 2024. The new design’s toppling feature is greater mobility and flexibility, in basically every respect. NASA unveiled both a full suit designed for use in extra-vehicular activities on the surface of the Moon, and a flight suit for use while in transit to lunar orbit.

Guided by NASA Administrator Jim Bridenstine, the agency first demonstrated the suit that astronauts will use on the surface of the Moon (and, with modifications, eventually on Mars). It’s called the “xEMU” variant, and it looks a lot like what you might think of when you imagine “space suit” in your mind. But it’s quite different in many respects from what astronauts used to visit the surface of the Moon during the Apollo program.

It allows you to actually moonwalk, for instance: The original suit used for Moon-based activities actually only offered enough range of motion for Neil Armstrong and Buzz Aldrin to be able to essentially “bunny hop” on the lunar surface, in Bridenstine’s own words. This new design allows them to move around much more dynamically, including actually walking, and offers plenty of range of motion for their arms. Combined with new gloves that actually allow astronauts to freely move their fingers, they can do things like pick up rocks off the lunar surface with relative ease. 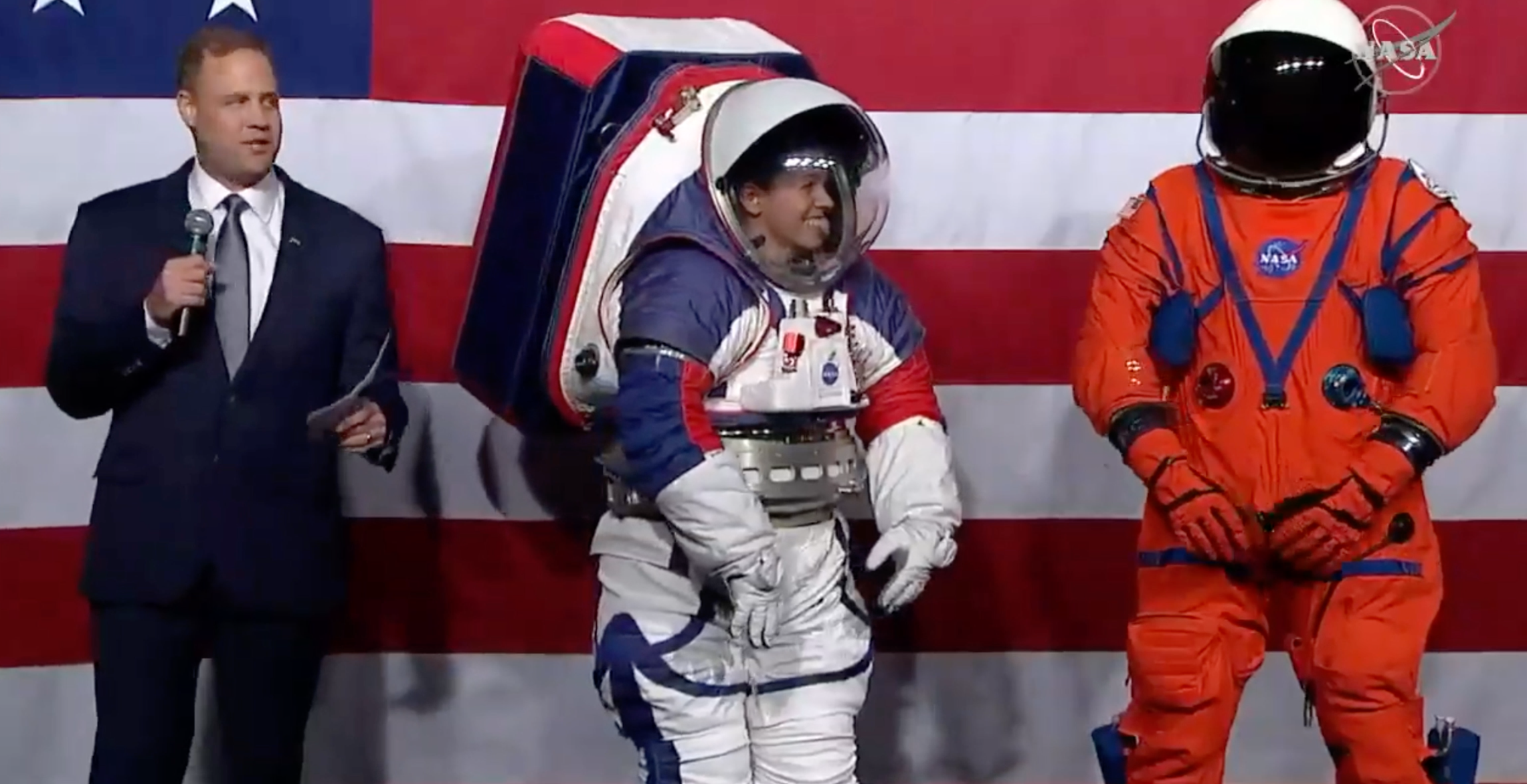 The new spacesuit design is also designed to work with virtually everyone who could want to become an astronaut, with inclusive sizing that can accommodate anyone from the “first percentile female to the 99th percentile male,” according to Kristine Davis, an Advanced Space Suit Engineer at NASA and the person who demonstrated the xEMU variant of the suit onstage at the event on Tuesday.

“We want every person who dreams of going into space to be able to say to themselves, that yes, they have that opportunity,” Bridenstine added, regarding the suit’s inclusive design.

Because NASA is also looking to ensure that this time when they return to the Moon, they do so sustainably (meaning with the intent of eventually setting up shop and staying), they also designed this suit with a much higher range of temperature variances to ensure it can serve at both the North and South poles of the Moon, as well as around the equatorial region. This xEMU suit is designed to survive temperature ranges from between -250 and +250 degrees Fahrenheit.

NASA also talked about how this is an improvement from the spacesuit currently used on the International Space Station. For one, this one has usable legs, where the legs on the ISS suits are essentially just for protection since you aren’t using them in zero and microgravity. The bearing designs used to connect the arms here also mean you have greater range of motion for reaching and grabbing, as mentioned.

The other suit, called the “Orion Crew Survival Suit,” is a much lighter suit that’s designed to be worn during take-off and landing. It’ll generally be depressurized when in use, but can provide protection in case of accidental depressurization. It was demonstrated by Dustin Gohmert, project manager on the Orion crew suit, who explained that it also has thermal protection and radiation protection, though not to the level of the xEMU.

The larger xEMU suit is also intentionally designed to be upgradeable, somewhat like a PC motherboard, and it’s designed so that it can be upgraded and worked on in space by the astronauts to adopt new and improved technologies as they become available, rather than having to be round-tripped back to Earth for updates.

Bridenstine re-iterated that NASA is also working with commercial partners on sourcing the production of the Artemis suits, as the agency announced earlier this month. It’s also looking to these companies to provide advice and input about what to do in terms of future evolutions and upgrades for the technology used in the suit.

Overall, Bridenstine was obviously eager to talk about commercialization, and NASA’s eagerness to work with commercial partners on the Artemis program, and on space in general.

“What NASA has already done is invested in commercial resupply of the International Space Station […] We have invested now in commercial crew. And in the first part of next year, we’re going to once again launch American astronauts on American rockets from American soil for the first time since the retirement of the Space Shuttles in 2011,” he said. “That’s going to be a really positive development for our country, but it’s going to be commercial […] And of course, we want to see a lot of robust commercial habitats in low-Earth orbit as well. Ultimately, what that enables us to do is then take the resources that the taxpayers give us, and go to the Moon and on to Mars, always keeping an eye on commercialization even there. The goal here is to expand humanity further into space than ever before.”