Just how Android is the operating system for a number of mobile phones, Tortoise wants to be the operating system for micromobility vehicles, its co-founder Dmitry Shevelenko, who previously served as Uber’s director of business development, told TechCrunch. Given the volume of micromobility operators in the space today, Tortoise aims to make it easier for these companies to more strategically deploy their respective vehicles and reposition them when needed.

Using autonomous technology in tandem with remote human intervention, Tortoise’s software enables operators to remotely relocate their scooters and bikes to places where riders need them, or, where operators need them to be recharged. On an empty sidewalk, Tortoise may employ autonomous technologies while it may rely on humans to remotely control the vehicle on a highly trafficked city block.

“There are big daily operating expenses with the repositioning of scooters using cars and vans,” Shevelenko said. “Not only is that very expensive, but it ends up undoing a lot of the environmental benefit of shared electric scooters.”

In order for this to work, Tortoise partners with both cities and operators — though the city partnership needs to happen first, Shevelenko said. That’s because Tortoise will only reposition the vehicles along routes that the city has pre-approved.

“We only want to deploy in cities that want this and have given us written permission,” Shevelenko said. “If the cities say yes, then the operators say yes.”

For the operators, they’ll need to install about $100 worth of equipment on each scooter in order to run Tortoise’s software. That includes two phone cameras, a piece of radar, a processor and a motor. If it’s a two-wheeled vehicle, Tortoise requires the addition of robotic training wheels. All of this is included in the reference design Tortoise provides to operators. 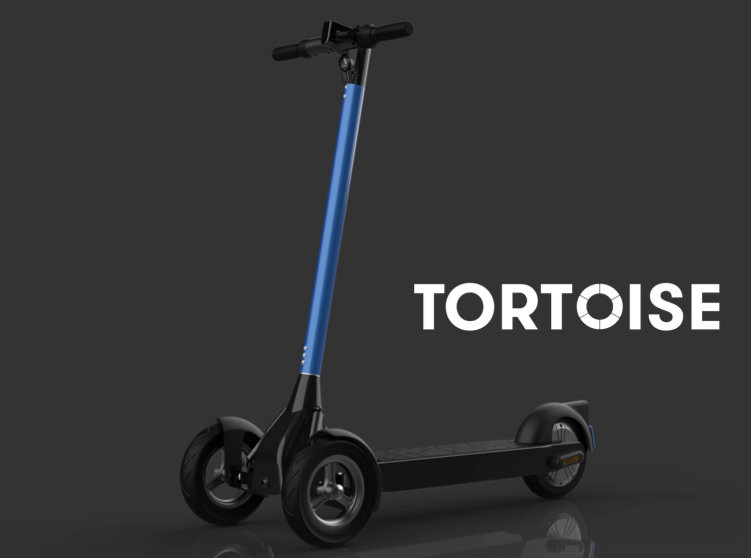 Tortoise on top of a YIMI A80 scooter

“In the same way Google helps Samsung make its phones work with the latest version of Android, it’s in our interest that people build vehicles that are compatible with Tortoise,” Shevelenko said. “We also consult with OEMs and help them with their testing.”

Tortoise is currently focused on suburban environments, but would like to make this work in cities like San Francisco, as well. For the initial pilot deployment, Tortoise is retrofitting existing scooters with robotic training wheels. In rider mode, those wheels are up, but in autonomy mode, it’s wheels down.

Tortoise envisions three general use cases for repositioning. The first is reparking the scooter in a higher-trafficked area immediately after a rider trip is complete. The second is implementing digital scooter stops of sorts where riders can request a scooter to go there. The third is the Uber-Lyft experience where the scooter goes directly to you, wherever you are.

“The key to making that third use-case work is having enough scooters so that the ETA is predictable and accurate,” Shevelenko said.

“Assuming eight repositions a day using our technology at 30 minutes each, that only takes up about 10% of a daily charge,” he said. “Even if that weren’t the case, as operators switch to swappable batteries, if you’re getting more rentals per day because of repositioning based on demand, you could just drive it to a location where it’s close to a swappable battery location.”

As business and mobility analyst Horace Dediu recently told me, these micromobility vehicles have an opportunity to also be software hubs. In fact, he said it’s where he expects bigger players like Google and Apple to enter the space. So far, Tortoise has partnered with Peachtree Corners, Ga. to demonstrate its software at Atlanta Tech Park. It’s also working with operators and manufacturers like Wind, CityBee, Go X and Shared to deploy Tortoise in their respective markets.

Wind, which operates in countries like Denmark, France, Spain and Germany, sees Tortoise as a natural fit, its EMEA CEO Ed Schmidt said in a statement.

“It will allow us to keep sidewalks clear and safe for pedestrians while delivering on our mission to always have a scooter within a 2 minute walk of a user ready to take a ride,” he said. “This technology will enable us to provide the best mobility service for our users and the city authorities.”

Tortoise is not the only company to explore adding autonomous technology to micromobility vehicles. In January, Uber spoke about a micromobility robotics team that would explore autonomous scooters and bikes that could drive themselves to be charged, or drive themselves to locations where riders need them. Last month, Uber revealed a bit more about its New Mobility Robotics team that would explore sensing and robotics for light electric vehicles. That entails features like sidewalk detection and, down the road, automatic repositioning of scooters, Uber Head of New Mobility Robotics Alan Wells told TechCrunch.

“That makes sense for a number of reasons,” Wells said of automatic repositioning. “It has a possibility of addressing some of the biggest downsides of where do you park them and also make them convenient for riders without being a burden to other people.”

Tortoise has raised some funding, but is declining to disclose the amount and specific investors.

Defining micromobility and its potential to be bigger than autonomous vehicles