Apple has booted from the App Store cannabis-promoting app Social Club after it devolved into a place where users were openly posting drugs for sale, and it became filled with photos of various drugs, guns and weaponry, racist content, memes, gore videos and adult and child pornography, according to its users. The app is inexplicably still live on Google Play.

Social Club first launched on July 15, 2019, and during its life saw 455,000 downloads across both iOS and Android devices, according to data from Apptopia.

The app was part of a larger collaboration between Joshua Otten, the co-founder of cannabis lifestyle brand PRØHBTD and CEO of content services agency RONIN, and rapper and Cookies dispensaries owner, Berner. The founders announced in an August press release their plans for “Social Club TV,” an over-the-top cannabis network featuring series about marijuana like “Marijuana Mania,” “HighTech,” “Pot Pie” and others.

The Social Club mobile app, meanwhile, was designed to offer a home for cannabis content and, most importantly, marijuana-related advertising, to flourish outside of Instagram, where such content is currently banned. 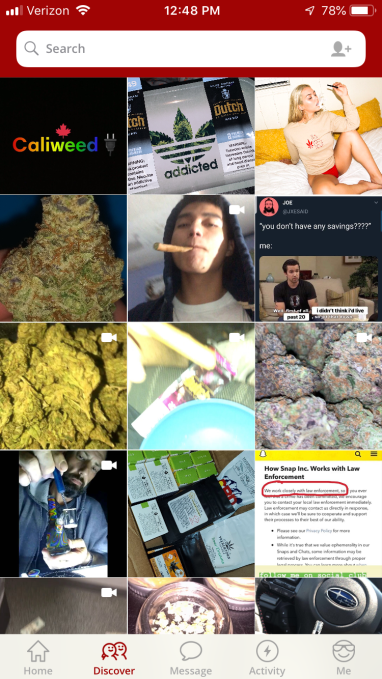 However, the Social Club app promoted itself not just as a place for sharing photos of cannabis, but rather a “zero-censorship community,” which clearly invited abuse.

According to a tweet from Berner, who was responding to NYT Styles reporter Taylor Lorenz’s comments about the chaos raging in Social Club, the app had been “attacked.”

I feel like we were attacked . I don’t see how overnight the app completely changed , sad , scary and wack . Cleaning it up now

“I don’t see how overnight the app completely changed, sad, scary and wack,” he said. “Cleaning it up now.”

But the app wasn’t so much attacked as it was poorly designed. There was no moderation or image recognition technology in place on Social Club, giving users a rare look at what it would be like if social media had no limitations or rules.

How is @AppleSupport allowing this social network (currently no.1) for selling drugs to be on @AppStore 🤔

Since its launch, Social Club soared up the charts on the App Store, becoming the No. 12 top-ranked app on the U.S. App Store across both apps and games, and the No. 5 top-ranked app. Social Club isn’t as popular on Google Play, where it’s the No. 70 top app and No. 132 overall.

He also shot down rumors that Social Club “was working with the feds” and warned people (using a lot of expletives) that it was really stupid to be posting drugs for sale on social media using your phone in the first place. That being said, he promised Social Club wouldn’t look at its users DMs.

In speaking with Berner about what went wrong with Social Club, he explained that the trouble started overnight. The app went from 170,000 users to just under half million in one evening. Over a dozen bots were identified as being a big part of the problem, as well as the fact that the main Discover feed updated in real-time — meaning, there was no time to deal with the bad content as it came in.

“We had pretty good community, but as soon as [the Social Club app] put the words ‘zero censorship’ up, I think that just led someone to be like, ‘Oh, let’s just f*** this guy up.’ Or maybe 200,000 weirdos just came out of nowhere, but I’m pretty sure it was attacked,” Berner said.

He also said the issues will change how he approaches Social Club, which was originally meant to be a marketing vehicle for his Cookies business.

“We never planned on monetizing this app. This was literally for me to promote Cookies, a billion-dollar company,” said Berner. “And with me not being able to show off my products on Instagram, it took a big hit,” he explained. “So I treated this, like, this is my marketing tool for our customers. Now that something has happened, I have to treat it like a business. I have to hire a bunch of people…I have to put a little more money into it and start figuring out ways to keep b**s*** off the app,” he said.

The company is working to clean up Social Club to get it back in the App Store.

[Updated after publication with additional commentary from Berner.]