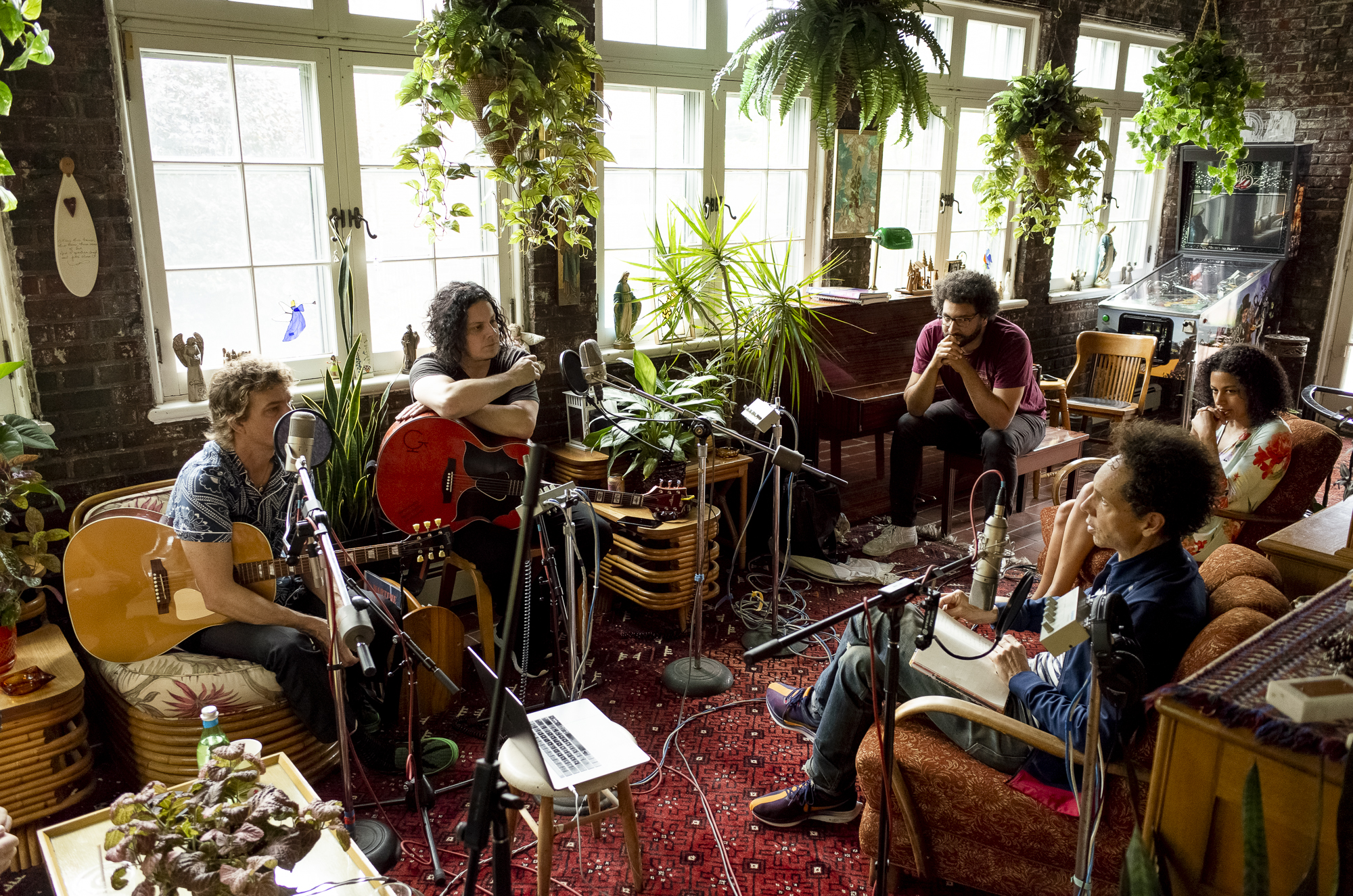 This week, we’ve got the producer and “fourth co-host” of Broken Record, Justin Richmond. Richmond actually does much of the talking for the popular music podcast, but you would probably bill yourself as number four if you were sharing mic time with Rick Rubin, Malcolm Gladwell and former New York Times editor Bruce Headlam.

The show aims to serve as aural linear notes in an era when musical context has gone the way of the 8-track and the original Ramones. The show’s guests have been a who’s who of popular musicians, including recent guests Jack White, Tyler the Creator and Ezra Koenig. Season three of the show kicked off recently and is available for listening at Broken Record Podcast. Next week, Richmond will interview rapper, producer, actor and former Fugee, Wyclef Jean.

Most days I work out of the greatest podcast studio there is: Shangri La, perched above one of my favorite Malibu beaches. OK, it might not be a podcast studio. Built by Bob Dylan’s band, The Band, in the mid ’70s, it’s where they recorded their last album as a group. They also taped the interview scenes from “The Last Waltz” there with Martin Scorsese. Bob Dylan’s tour bus was marooned there and has since been turned into a recording space. Black Sabbath recorded their last record there. Neil Young has used it, Run the Jewels, Eric Clapton, Kendrick Lamar … everyone. It’s one of the perks of working on a podcast with Rick Rubin.

There are two studios at Shangri La we typically use. One is in the main studio, with a beautiful API console and U87 microphones. Rick and a guest sit in the control room above the studio’s “live” room and overlook a beautiful green landscape and the ocean. Typically the windows are open so you can often hear helicopters flying by, motorcycles speeding down PCH or birds chirping. But it gives the recordings character. The other place we record is in what we call “The Chapel.” It’s a small charming building that looks like, you guessed it, a chapel. We also use U87’s down there and the console is from the famed Muscle Shoals studio in Alabama. It used to be at Rick’s old Laurel Canyon studio where he recorded the Red Hot Chili Peppers and countless other groups in the ’90s and early 2000s. These bits of history are what make creating a music podcast from there so surreal and fun. 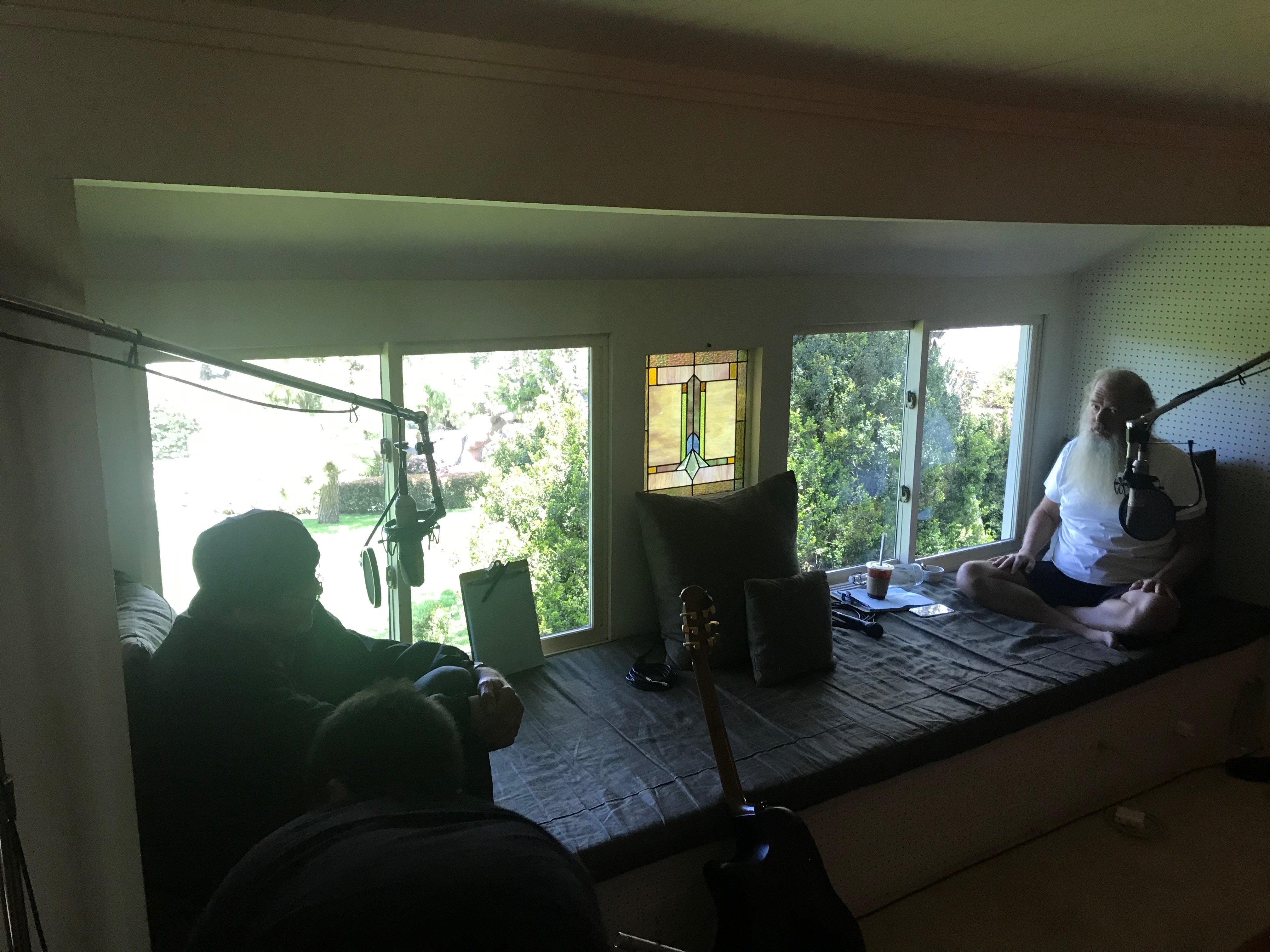 But some days my studio space is challenging (though, honestly, still very fun). Our first episode for Season 3, for example, is Malcolm and Rick talking with the Raconteurs — primarily Brendan Benson and Jack White. We taped the episode in Jack White’s sunroom at a home of his in the Detroit area. As you can tell from the picture, it’s a beautiful space, but there’s a lot going on … and we’re far from our usual Malibu digs. Luckily, Bill Skibbe, who does the mastering for Jack’s Third Man Records stuff, was able to pull up with a wonderful mobile rig.

However, Rick wasn’t in Michigan — he was in Italy. We were initially going to have him FaceTime in and sync himself with an RE-20 on his end, but the internet on both ends was a little shoddy. So we ended up putting my iPhone in the middle of the room with Rick on speaker. It was a nightmare to reduce the bleed of any and every sound coming through the phone on Rick’s end, but we painstakingly got it done.

Because Rick, Malcolm and Bruce keep very busy schedules we have a bunch of other studios lined up across the country that provide wildly different environments. But somehow we’re managing to unify the Broken Record sound.