Sebastian Thrun is waving a device in his hand with an excited, almost gleeful expression on his face as he trots from a makeshift aircraft hangar toward the secret project that Kitty Hawk Corp. has been working on for nearly two years.

The serial entrepreneur and co-founder of X, the Alphabet moonshot factory, isn’t trying to contain his excitement as he presents what appears to be a decibel meter.

Thrun, the CEO of aviation startup Kitty Hawk, and Damon Vander Lind, the physicist and electrical engineer who has been leading the project, are standing in an expanse of grasslands and low-lying, oak-dotted hills that can only be described as cattle country. But there are no cows to be found here. Instead, a low-slung, orange and black aircraft with eight rotors and a 20-foot wingspan sits on a small asphalt pad.

It’s called Heaviside. Vander Lind’s pink-hued T-shirt, the letters HVSD emblazoned across it, suddenly makes more sense than it did an hour before.

The first is Flyer, a single-seater, all-electric, vertical take-off and landing vehicle powered by 10 independent lift fans that operates between three to 10 feet off the water. Then there’s Cora, a two-person, autonomous taxi that Kitty Hawk unveiled in 2018. Kitty Hawk, which is backed by Google co-founder Larry Page, recently formed a strategic partnership with Boeing to collaborate on urban air mobility, particularly around safety and how autonomous and piloted vehicles will co-exist. The partnership will focus on Cora.

“If you build an aircraft that can land anywhere and then say ‘actually, oh wait it can’t just land anywhere, no I need a big helipad and I need to build a bunch of structure and all that’ — you miss the point,” said Vander Lind.

And indeed, HVSD isn’t parked on a large runway or giant helipad. The aircraft, which weighs about one-third of a Cessna, is on a section of asphalt not much bigger than its wingspan. Just beyond this man-made parking spot are acres of grassland and the occasional tree. There is no runway to be found.

The big promises that Thrun and Vander Lind are trying to deliver on here are speed, silence and ease of use.

Vander Lind, who earned his pilot’s license, commutes part of the way to work in a single-piston engine aircraft he fixed up. He takes a bicycle for the remainder of the journey. The physicist and electrical engineer, who was a lead engineer at the Alphabet-owned airborne wind turbine company Makani Power, notes that his commute, while fun, is hardly practical.

HVSD aims to deliver both an enjoyable ride and practicality, Vander Lind said. 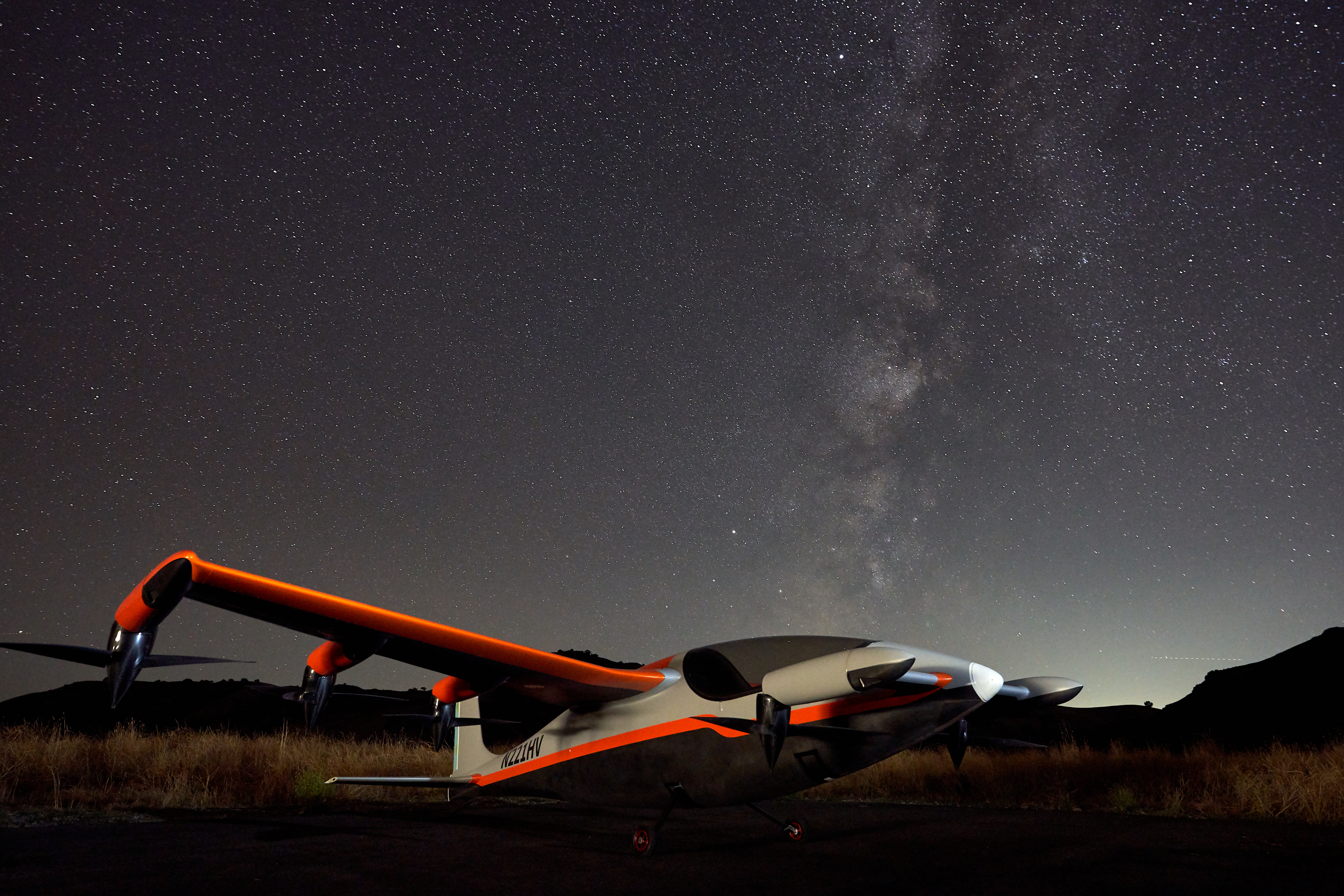 The aircraft is 100 times quieter than a helicopter, the pair said. And it’s faster. Thrun says HVSD, which has a range of about 100 miles, can travel from San Jose to San Francisco in 15 minutes. The aircraft can be flown autonomously or manually, but even then most of the tasks of flying are handled by the compute, not the human.

Moments after walking around HVSD, the decibel meter, still in Thrun’s grasp, gets put to work. A helicopter that is stationed about 150 feet from where we’re standing is fired up. After two minutes, the helicopter lifts off, its whop-whop-whop lingering even as the craft is more than 600 feet in the air and begins its circular flight path around the testing area. The meter pops above 85 decibels and stays there for several minutes. The decibels go beyond 88 decibels at landing.

Later, after the helicopter lands and the engine slowly winds down, the test turns to HVSD.

An engineer, who is standing in an open air tower, brings HVSD suddenly to life. Unlike a helicopter, the HVSD starts and lifts off in just seconds. There is sound as it lifts off — hitting about 80 decibels — but what’s striking is the brevity. The take-off sound lasts fewer than 10 seconds. As HVSD gains altitude and then circles above us, the only sound is a few engineers and technicians talking nearby.

Once Thrun quiets the crew, the noise falls below 40 decibels, which is what a typical, quiet residential neighborhood registers at. HVSD is nearby at about 600 feet of altitude, but it is barely audible as it circles above us. An office with an air conditioning running might be about 50 decibels, Thrun says for comparison.

“The calculus here is that this has to be socially acceptable for people,” Thrun says. “There’s a reason why helicopters are not: they’re for rich people and they’re noisy.”

It took just a year to take HVSD from a concept and some sketches to building a prototype and conducting the first test flights. This past year has been spent testing and refining the aircraft and, as Vander Lind puts it, “trying to make it crash.” It’s a goal that they have yet to accomplish.

“This thing is really robust,” Vander Lind says pointing to HVSD before turning his sights onto the nearby helicopter. “On the helicopter, there’s a little bolt on top, and if you unscrew that, you take the cotter pin out, we all die.”

Kitty Hawk is testing HVSD without a pilot inside, which allows the company to push the aircraft and look for flaws and vulnerabilities. “We want to do everything we can to break it in the air, so when you get in it, it’s safe,” Vander Lind says.

It might be awhile before the public gets in HVSD. The Federal Aviation Administration allows Kitty Hawk to test its aircraft as long as it stays within view of the company’s engineers and test crew on the ground. And Thrun and Vander Lind acknowledge there’s more refinement to be done.

For instance, the cockpit, which fits just one person, is still just carbon fiber. Sitting snugly inside, and kicked back like one would be riding a recumbent bicycle, it’s not quite cozy. Vander Lind, who says engineers have slept in it as “one aspect of the testing,” reminds me I’m sitting on bare carbon. He wants to add a lumbar support, arm rests and other comfort features.

The interface of the aircraft at Kitty Hawk’s secret testing area has been stripped out. But Thrun tells me the interface will be simple to use like “pushing a button.” 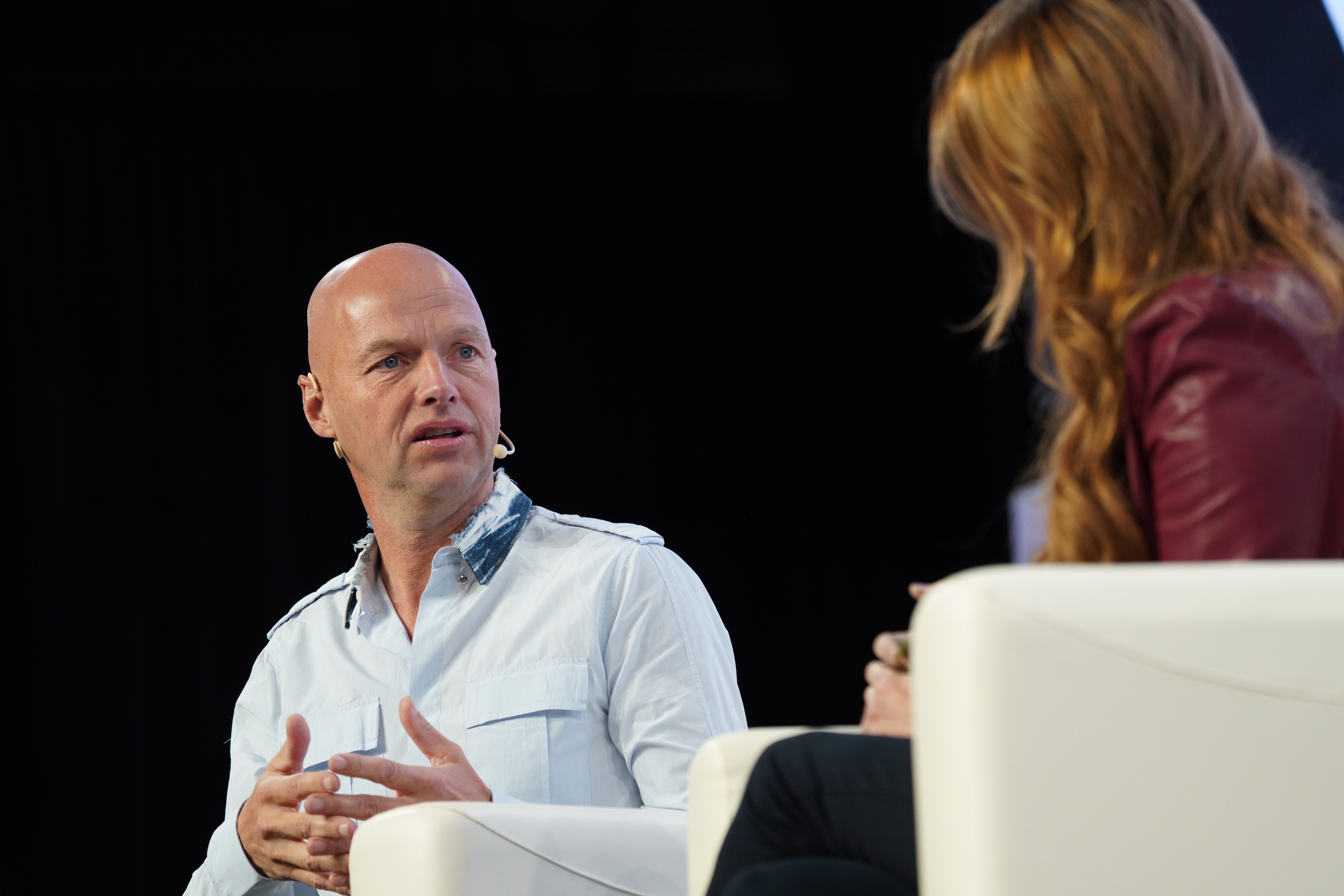 The idea is for HVSD to be accessible to more than just the super rich and those who have a pilot license, Thrun says. And, of course, to make commuting easier and faster.

Thrun and Vander Lind are squarely in the visionary and dreamer category. But even they understand there is work left to be done if they ever hope to bring HVSD to the public. Safety is paramount and the team is working on the compute that will handle the flying as well as redundancies.

And then there is the regulatory piece. Thrun has tapped Mike Huerta, who served as FAA Administrator from 2013 to 2018, as an adviser to Kitty Hawk to help the company get closer to its goal.