Code-named “Gemini,” Brex today announced a new product designed to replace and improve the functionality of traditional bank accounts. Brex Cash, as it will be known publicly, is a business cash management account integrated with the Brex Card, a corporate card for startups launched in 2018.

Brex tells us they’ve built the core banking infrastructure from scratch, allowing the company to forgo third-party processing fees and provide a much-needed tech infusion to antiquated banking systems. In partnership with Boston’s Radius Bank, Brex Cash will allow customers to send payments quickly and easily with no transaction fees attached. Rather, Brex plans to reward its users for making or receiving payments using Brex Cash with points redeemable for cash back, travel and air miles. Customers will also receive 1.6% yield on deposits.

It’s not a bank, but in practice, it can replace a bank, says Brex co-founder and co-chief executive officer Henrique Dubugras.

“Our idea is that new businesses—the new Y Combinator companies —we hope a big percent of them never open a bank account,” Dubugras tells TechCrunch.

Brex now has many similarities to a bank. What differentiates it is its lack of physical branches — it’s exclusively digital — and its insurance. Traditional banks are insured by the Federal Deposit Insurance Corporation (FDIC), which protects up to $250,000 per depositor. Brex Cash users are protected by the Securities Investor Protection Corporation (SIPC), a nonprofit agency overseen by the U.S. Securities and Exchange Commission that protects up to $500,000 and specializes in protecting customers of brokerage firms from the loss of cash and securities.

We think we’ve won a lot of credibility. Before, who was going to give their money to a random-ass startup called Brex? -Brex co-CEO Henrique Dubugras

Additionally, Brex invests its customers’ money in a money market mutual fund of U.S. treasury bonds. “If Brex goes out of business, customers’ money will be safe,” the company writes in a press statement. “The only scenario where money could be lost is if the U.S. government defaults.” [Update 10/2/2019: Brex says this quote alone is taken out of context, rather, the company was trying to communicate that it would take something like the U.S. government defaulting in order for Brex customers’ money to become unsafe.] 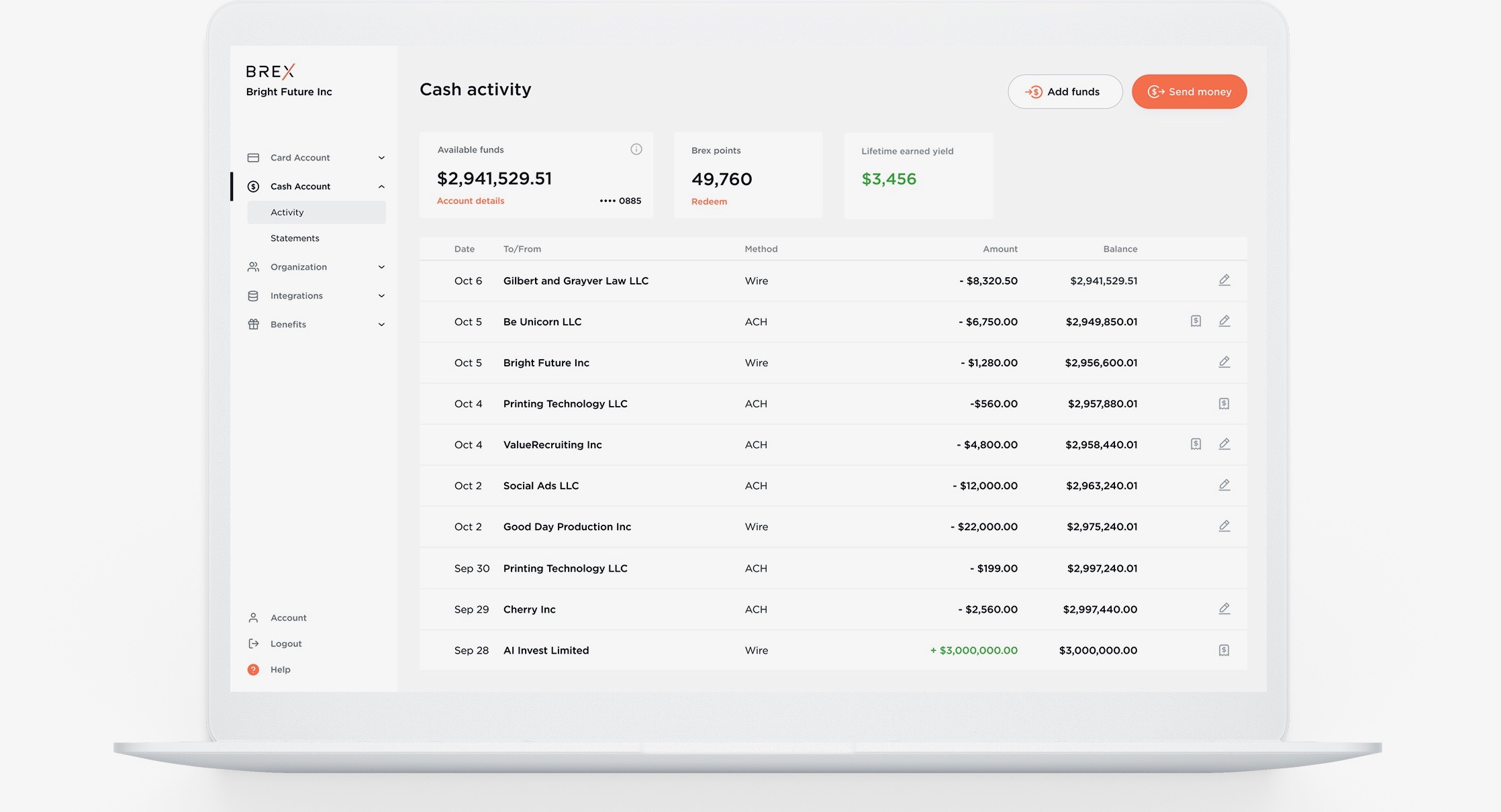 “It’s not that we are inventing this — this model exists with Fidelity,” says Dubugras. “Fidelity isn’t necessarily a bank — we are bringing that concept to businesses to give lower fees, better interest rates, better experiences and more security.”

Brex, a graduate of the winter 2017 Y Combinator cohort, has quickly become a Silicon Valley success story for the ages. The rapid adoption of its startup credit card, which doesn’t require a personal guarantee, and its ability to issue cards instantly and provide higher limits than other options on the market has attracted thousands of customers and venture capitalists. The business, led by a pair of young Brazilian repeat entrepreneurs, including Dubugras and co-CEO Pedro Franceschi, has collected more than $300 million in equity funding, including a $100 million C-2 financing that valued the company at $2.6 billion earlier this year.

“There will always be customers that are skeptical, but I think by starting out with a card, we built a lot of trust,” Dubugras said. “It was us giving them money instead of them giving us money. A few years in … We think we’ve won a lot of credibility. Before, who was going to give their money to a random-ass startup called Brex?”

In the weeks ahead of TechCrunch Disrupt San Francisco, where Dubugras announced Brex Cash on Wednesday, the CEO told TechCrunch that Brex had no immediate fundraising plans and that they were “waiting for the right time” to raise again. As for what’s next, he said the company is discussing the launch of a debit card and plans to add another 100 employees in the next year, bringing the Brex headcount to 400.

The Brex news follows the launch of Stripe Capital, a new offering from payments behemoth Stripe that will make instant loan offers to customers on its platform, and the announcement of the Stripe Corporate Card. Akin to Brex, Stripe will issue a no-fee, no interest rate credit card intended for Stripe customers. Brex and Stripe, two Y Combinator grads, will go head-to-head in a battle for customers, particularly YC grads looking for friendly financial tools.

Immediately following Stripe’s announcements, the business announced a $250 million funding at a $35 billion valuation. Brex may be following a similar playbook, announcing a major product on the heels of a large capital infusion.

Brex Cash represents a new era for the company. Though the product may be costly for Brex, it opens the business up to thousands more potential customers. Now, any startup, regardless of funding, can create a Brex account to store cash, explains Dubugras, and all companies using Brex Cash will be immediately issued a Brex corporate credit card.

“If you’re starting out, if you don’t have funding yet, you can still receive your payments using Brex,” Dubugras said. “That’s a super big deal for us.”

Brex Cash was built under product lead Ritik Malhotra, who joined the team as part of an acquisition of his startup, Elph. Brex poached the company, which was focused on blockchain infrastructure, right out of YC for an undisclosed amount. In retrospect, the deal looks much more like an acqui-hire of Malhotra, who had the digital payments infrastructure acumen necessary to complete this project.

“It’s an easy way to move money, which is the lifeblood of a business,” Malhotra tells TechCrunch of the new product.

Brex Cash is itself not a cash cow for Brex; rather, the startup makes money on purchases made on its corporate card, in which it charges the merchant, not the customer. This model is particularly beneficial when its customers are spending a lot of money, growing quickly and raising capital. In a downturn, however, this model isn’t as attractive.

Brex seems unconcerned with the possibility of an impending recession. Brex writes that even in downturns, entrepreneurs will start companies and attempt to raise money. The Brex Cash product, regardless of the economy, will help Brex better underwrite Brex Cards, as it gives them better access to a customer’s financial health.

In a battle against Stripe, Brex is at a disadvantage. At only two years old, the company may have garnered a lot of credibility in a short time but it doesn’t have the decade of experience building fintech products that Stripe has and, more importantly, it doesn’t have 10 years of customer loyalty.