There weren’t many scenarios where consumer were deciding between buying the original Skydio R1 autonomous drone and something from DJI. The R1 was the second drone in your arsenal, it was a couple grand and it gave users an experience that was technically impressive, occasionally useful and a little bizarre.

It was exciting but it was still one hell of a niche. The startup had raised $70 million in funding from Andreessen Horowitz, IVP and Playground Global to create a different kind of autonomous drone.

While the first-generation looked and felt like a prototype, the startup’s soon-to-be-released Skydio 2 meets the functionality desires one would have for their primary drone. The drone is half the price at $999, faster, much smaller and more portable, has longer battery life and can be flown more conventionally with optional accessories.

The biggest issue with the R1 was that its standout autonomous mode was the overpowering default. Here you were buying a $2,000 product and once it got to be dusk, it wouldn’t even get off the ground. You were limited in distance, limited in speed, and you were ultimately stuck with a device that could handle edge cases but stumbled on the basics. It enabled shots you could never think of doing — barreling barreling down a mountainside on a snowboard with the drone hot on your tail — but you couldn’t easily pilot the drone for sweeping panoramic shots, instead having to rely on the baked-in cinematic movements called “dronies.”

The Skydio 2 is still meant to primarily be an autonomous companion; the $149 controller is a separate accessory as is the $149 beacon which lets the drone fly at greater distance and track users more accurately. The drone has a 200m flight range to the phone, a 1.5km range to the beacon and a 3.5m range to the controller. 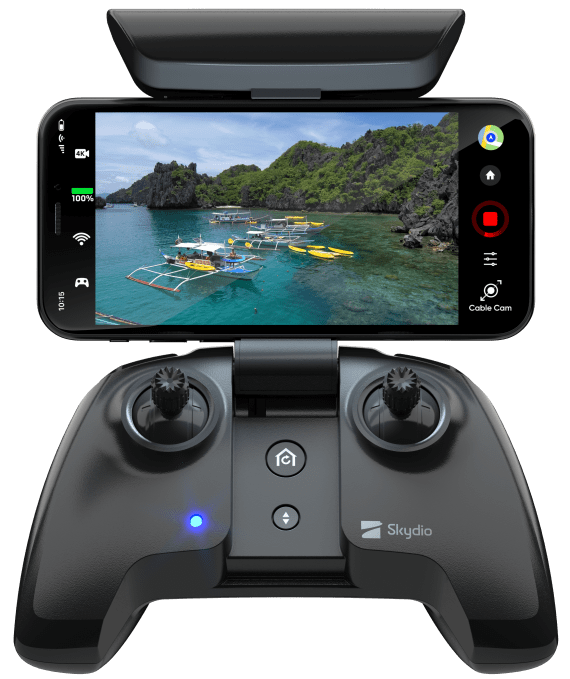 It can do all of this much faster now and for a bit longer. The top speed now maxes out 36 miles per hour, compared to 26 miles per hour on the first-generation. The battery life sits at 23 minutes, which still falls short of what DJI’s Mavic 2 is capable of, but is an improvement over Skydio’s previous-generation.

I had the chance to fly the drone around with the new controller and this drone is perhaps at its most impressive when you forget how smart it is. Piloting the Skydio 2 straight for a group of trees with the controller — a nightmare for even seasoned drone pilots — is a cakewalk as the drone finds its own way around branches and trunks using your guidance to move forward as its key objective while figuring out the details on its own. For novice fliers that are never going to be experts, this is pretty priceless functionality and takes plenty of the nerves out of the process — in my brief demo at least.

The consumer drone market has plenty up against it, but at this price point, the Skydio 2 seems to make a decent sell to a wider swath of consumers than its leading competitors. 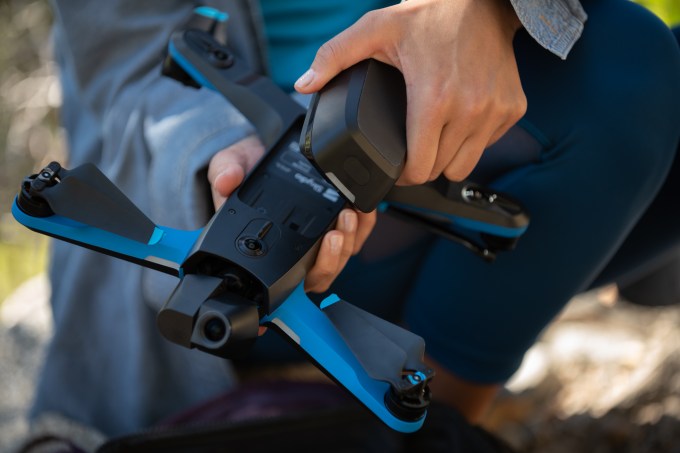 The drone is doing more with less, it now has just 6 onboard tracking cameras, compared to the 12 its first generation had. When it comes to the image quality on the Skydio 2’s non-tracking gimbal-stabilized camera, everything seemed up to snuff for the 4K 60fps but I’ll have to spend some more time with the drone before I can judge how things look.

When you stare down the realities of the drone market, Skydio has built an incredibly competitive drone that’s coming in at a more palatable price point. The startup’s first iteration was an experiment for action camera enthusiasts, the Skydio 2 could shift the consumer drone market in a way that few have in DJI’s world.

The $999 drone is launching in November in limited quantities. The company is taking $100 reservations ahead of launch over at its website now. The startup says buyers of its first drone, which launched early last year, will be able to get the Skydio 2 at a “significantly discounted price.”