The EcoFlow Delta is a new battery generator available on Kickstarter with incredible features claimed. Most are true, some are not.

Devices like the Delta offer incredible battery storage capacity. Designed for more than just recharging phones and tablets, these can run refrigerators, pumps, power tools and medical equipment. They’re great for emergencies, camping and general use where power is not available. Similar devices have been on the market for some years, so I was eager to verify EcoFlow’s claims.

The EcoFlow Delta can recharge from a wall outlet to 80% in an hour. It’s amazing. The GoalZero Yeti battery of a similar size takes 25 hours. This capability means the Delta can be used and then reused more than competitors.

The device is currently on Kickstarter, where it quickly acquired more than $2 million from over 2,000 backers. The device’s features listed on the Kickstarter page are clear, but after testing a pre-production unit, I found several of these advertised capabilities and features misleading or false.

The Delta is the latest product from EcoFlow. The company’s founder, Eli Harris, says it’s “The world’s strongest battery generator.” I found the Delta to be a competent battery generator with similar capabilities to competitors, but it’s hampered by loud fans.

In short, if you need a battery generator that can recharge much faster than others, the Delta is a great option. Otherwise, the GoalZero Yeti makes more sense for most people.

Battery generators are a safe and more portable option than their gas counterparts. There are no harmful fumes or fuel, allowing them to be used indoors, nearer the appliances or tools. Most often (though not with the Delta) they’re silent, too, making them perfect for a camping or hunting companion.

In real-world operation, this quick recharge time could come in handy. Say, on a construction site or in an emergency incident where power is still available, but out of reach of an extension cord — situations where loud gas generators are generally used. While the Delta is louder than other battery generators, it is not as loud as a gas generator.

The Delta battery comes packaged with a warning that the battery must be fully charged before use. I generally ignore warnings, but I followed this one and immediately plugged it in. Instantly, fans whirled to life and the screen popped on, displaying the current charge levels and how long it would take to get to 100%. The Delta was at 30% and would take 45 minutes to fully recharge. It worked as advertised, and 45 minutes later the battery was at 100%.

Recharging the Delta battery was a noisy affair. The fans are loud and continue to run after the battery is fully charged. Compared to a GoalZero Yeti, this was a shock. The Yeti is silent, where the Delta is not. I keep a Yeti 1400 in my basement, plugged in and ready to use. But with the Delta, even when the battery is fully charged, loud fans still run, presumably to keep the unit cool. EcoFlow says the shelf life on the Delta is over a year, where the GoalZero Yeti is six months. To me, I would rather have the battery constantly plugged into power so I know it’s ready to go when needed.

The Delta recharges without an AC power inverter (a power brick); it uses the same sort of cable as a desktop PC. The company says by passing through the inverter directly, the Delta can increase charging speed to more than 10 times the traditional AC to DC adapter cable. This also means it’s easier to replace a lost charging cable.

The Delta is much lighter than competing products and its design makes it easier to move. EcoFlow says it’s rugged, and it feels the part. Even my pre-production sample feels tough and ready to go to work. Large rubber pads keep the battery in place and the tough plastic feels more durable than competing products.

There are a handful of plugs and outlets around the device, including USB, USB-C and six AC outlets. It’s a lot, and similar in capacity to large gas generators. Most battery generators have much fewer AC outlets, though I’ve often supplemented the capability with small power strips. 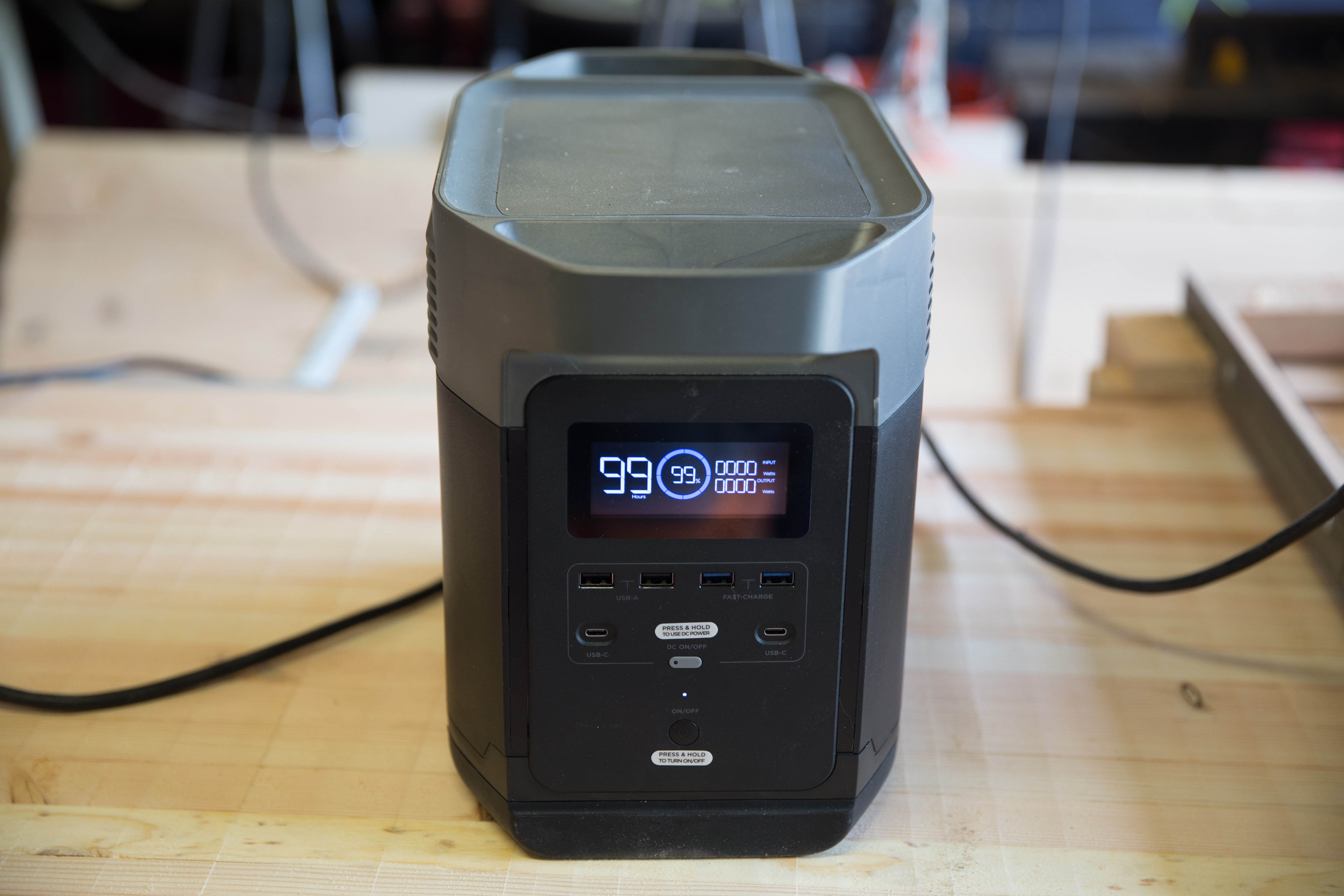 The Delta is currently on Kickstarter for pre-order and exceeded its goal. I fear a good amount of backers will be upset to learn several notable advertised features are false or misleading.

The Delta is not silent. Under operation, either recharging a cell phone or running a power tool, loud fans run on both sides of the battery. These fans run when recharging the battery, too — even when the battery is fully charged. The Kickstarter page and video lists throughout that the Delta produces no noise.

These fans detract from the appeal of the Delta battery. They’re loud. You have to raise your voice to speak over them. Because of these fans, I wouldn’t take the Delta camping or use it in the backyard for a quiet get-together. During power outage situations, I wouldn’t want to sleep near it. But I would use it for power tools — like EcoFlow does in one of its demo videos.

Only one of the four videos on the Kickstarter page allows potential owners to hear the Delta battery. The third video on the page shows the battery powering a hammer drill. Six seconds into the video, the drill stops running, and the battery’s fans are audible.

There are a handful of competing batteries that operate without noisy fans. I’ve taken GoalZero’s Yeti batteries camping and they’re great despite their heft. They’re truly silent and can still recharge from solar panels and car batteries. I’ve used battery generators from Jackery, too, and those are also silent.

I spoke with EcoFlow CEO and founder Eli Harris during the run-up of this review. He was clear that EcoFlow’s main competitor is not other large batteries, but rather small gas generators available from Honda and others. And that makes a lot of sense. Those are the best-selling generators available, and widely used for emergency and convenience. These small generators are loud, and the EcoFlow Delta is quieter than those options while still offering most of the power capabilities.

EcoFlow claims the Delta battery can run a variety of power tools, including drills, circular saws, power washers and welders. I found this capability hit or miss. Despite some tools being under the claimed amperage and wattage of the Delta battery, the battery wouldn’t power my small or large circular saw or power washer. EcoFlow also claims the battery can recharge a Tesla; it doesn’t recharge my Chevy Volt.

Many tools require extra power when starting up, and I found most of these surge requirements to exceed the capabilities of the Delta battery. This is the same with other batteries like the GoalZero Yeti. In fact, I couldn’t find one tool in my workshop that the Delta powered and the Yeti did not; they worked the same for me, and I have a lot of tools.

Don’t mistake what I’m saying. The EcoFlow Delta has impressive capabilities, mainly around its recharge capabilities. This makes it an attractive option for the right use. It’s compact and solid. It has a lot of outlets and is easy to move. This could be a lifesaver in emergency situations where a person still has access to power.

The Delta has some downsides just like other battery generators. It doesn’t offer a dramatic increase in electrical output over competitors, so don’t expect this battery to power larger devices. Don’t expect a silent operation, either. This massive battery is loud though; I admit, that’s a relative term. It’s louder than other battery generators but less loud than a gas generator.

I would rather have a silent battery generator that recharges slowly versus a noisy, fast-recharging battery. I use my battery generators camping and around the house when the power goes out. The Delta makes sense on a construction site or when providing power is priority. I just can’t get over the loud fans.