Online-only banks have become a viable option for many people who would have traditionally used a brick-and-mortar bank but are now looking for more flexible, potentially cheaper ways to handle their monthly incoming and outgoing finances, their savings and loans, and their payment cards. That maxim has also extended to the world of business, and today a startup that has built a business-focused challenger bank, specifically for startups like itself, is announcing a round of funding as starts its growth in earnest.

Mercury, which describes itself as a bank for startups, has banked $20 million of its own in funding, a Series A that is being led by CRV with support also from Andreessen Horowitz, the VC that led its investor-heavy $6 million seed round earlier this year. The company, I understand, has a post-money valuation now of $100 million.

And by investor-heavy, I mean that on two counts: it featured a lot of heavyweights, and there were nearly 40 individuals and firms chipping in. Others in this latest round include Kevin Hartz, CEO of Eventbrite; Scott Belsky, co-founder of Behance; Ryan Petersen, CEO of Flexport; Kevin Durant of the Brooklyn Nets; and Andre Iguodala of the Memphis Grizzlies. Its bigger list of backers now totals over 100 and also includes the founder of Silicon Valley Bank Roger Smith, Bill Clerico of WePay, and Naval Ravikant, among many others.

This latest funding comes on the heels of Mercury having launched only in April 2019, and is a result of what appears to be very strong demand for what it has to offer. In the first week of its launch it had 1,500 signups, and it has been growing at 40% each month since.

To be sure, there are already a number of options on the market for a startup looking for a bank. Aside from traditional institutions that all offer special accounts for small businesses (which essentially is what a startup is), there is Silicon Valley Bank), and other challengers like Revolut and N26 that started first with consumers but are now increasingly also targeting smaller SMBs.

That’s before you consider the wave of other fintech juggernauts out there, like Stripe, that are slowly building a suite of services that could be a natural complement (and, thus, potential precursors) to basic banking, too. (No plans from Stripe to build something like this at the moment, co-founder John Collison told me earlier this month when I asked about it.) 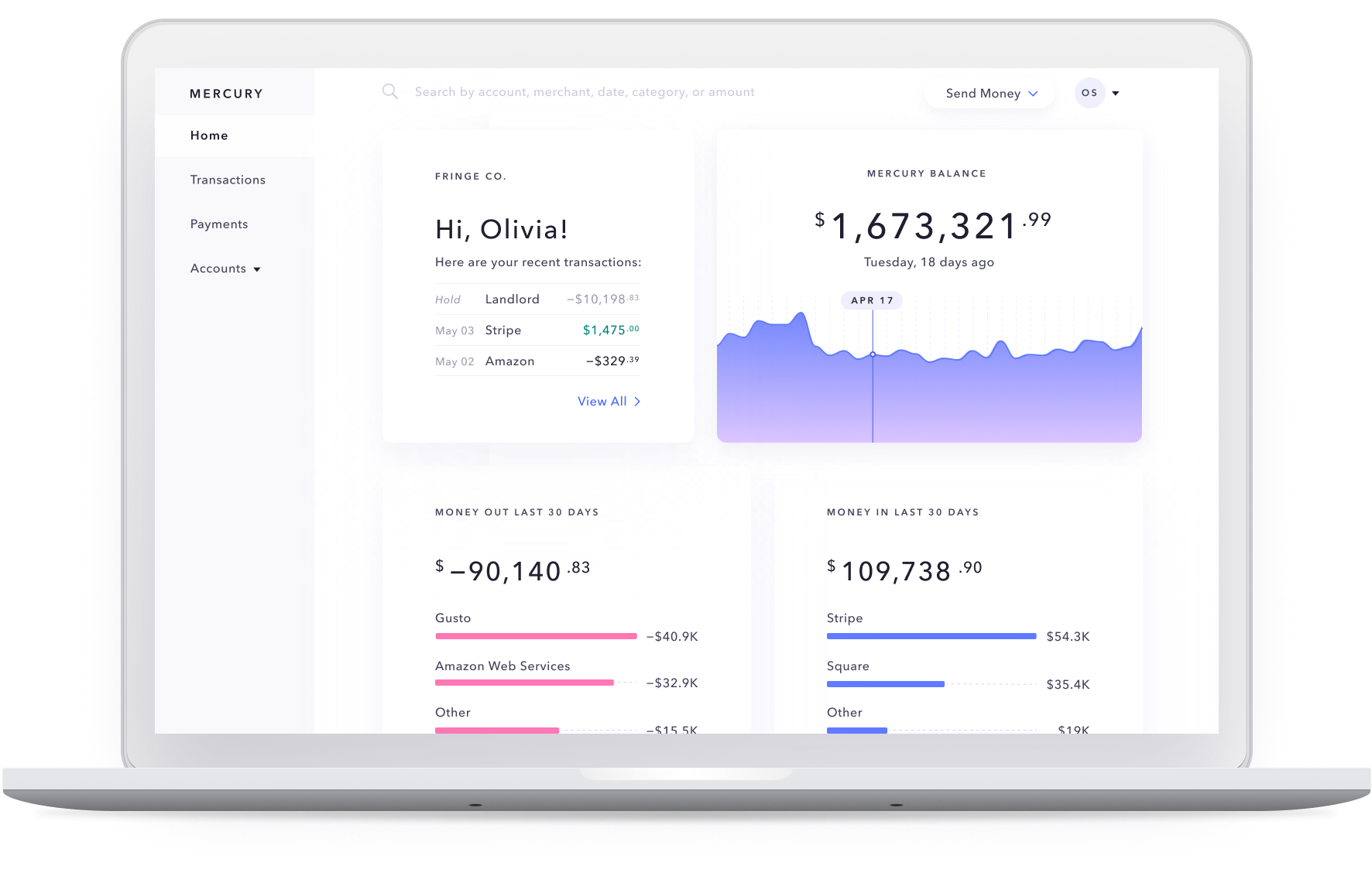 Immad Akhund, the CEO and co-founder of Mercury, is aware of what the shortcomings are today in the market from a couple of perspectives. His previous startup, mobile ad network Heyzap, regularly “was constrained by cashflow” that inhibited growth and operations and needed to do run of the paying out processes of the business (which included a programmatic ad network) manually.

After he and his co-founders sold Heyzap in 2016, Akhund used some of the proceeds to become an investor in early-stage startups (120 in all), he saw the same challenge continue to persist. “Nothing had really changed,” he said, “and I thought a bank could do a better job. With Mercury I saw that I had the opportunity to build something that was needed.”

Inspired by the proliferation of challenger banks that have sprung up across Europe that were mostly targeting consumers (and now potentially stand to be competitors with newer business services), he set out to build Mercury with a lot of services that are very specific to the kinds of things that a startup might need to be managing when it comes to its money.

In addition to checking and savings accounts (FDIC-insured, by way of Mercury’s white-label partnership with Evolve) that come with up to 1.75% interest, the service features clean, modern dashboards; easy interfaces for setting up payments; an online sign-up that Mercury says takes only 10 minutes to go through, with the account ready to use within 24 hours; and a facility to manage and monitor activities of different employees that have access to the account.

These are just the basics, however. The service integrates with a company’s existing accounting software or any software that already manages recurring payments. And on the horizon are a number of new features that Mercury is building, along with an API, that will let its clients manage the money in their accounts and all of the places where it might typically be getting paid in and paid out.

“We are talking to customers and building what they need,” Akhund said.

This will including lending, but also a number of other features around payments, with an API that will let users access who paid the company, without logging into Mercury’s actual dashboard to do that. This could be useful, for example, for integrating this into another piece of accounting software. He also noted that in marketplace-style business, you are not only receiving money from many places but also needing to pay people out, so having a way of being able to do that more easily and immediately could be a big boost to a business.

The aim is to automate and speed up the way money moves, or “to pay out programmatically,” as Akhund describes it.  Much further down the line, you could imagine this to also include interesting insights and other services based on all the data Mercury amasses about a business.

This idea has resonated with founders — who are both signing up to the service and also coming in as backers. Despite the work that having a huge investor pool might entail for the business (many ideas, many voices to be heard) Akhund said that having a big pool of them involved financially was important to him, given his target market.

“Any founder that’s worked with a bank before knows the experience as it has been is fundamentally broken. Banking has been the crucial missing piece of the startup stack that hasn’t yet been modernized. I think entrepreneurs know something special is being built right now,” said Justin Kan, the repeat entrepreneur who is now the CEO of Atrium, said in a statement.

Mercury’s current customers include​ ​YC startup Tandem​, Remote​, and​ ​Linear​. “​Using Mercury was a no-brainer for me,” said Rajiv Ayyangar, CEO and co-founder of Tandem, in a statement. “After decades of dealing with terrible banking systems, it’s been amazing to use Mercury, where things just work. I’m never worried I did something wrong nor am I frustrated because I can’t find a piece of information I need. The delta is so large that I actually look forward to the odd finance task!​” Given what a headache working with banks can be, I’m not there could be a better endorsement, so the ball’s in Mercury’s court now to deliver and be more than a short-lived startup to these startups.