If their post has lots of Likes, you feel jealous. If your post doesn’t get enough Likes, you feel embarrassed. And when you just chase Likes, you distort your life seeking moments that score them, or censor it fearing you won’t look popular without them.

That’s why Facebook is officially starting to hide Like counts on posts, first in Australia starting tomorrow, September 27th. A post’s author can still see the count, but it’s hidden from everyone else who will only be able to see who but now how many people gave a thumbs-up or other reaction. 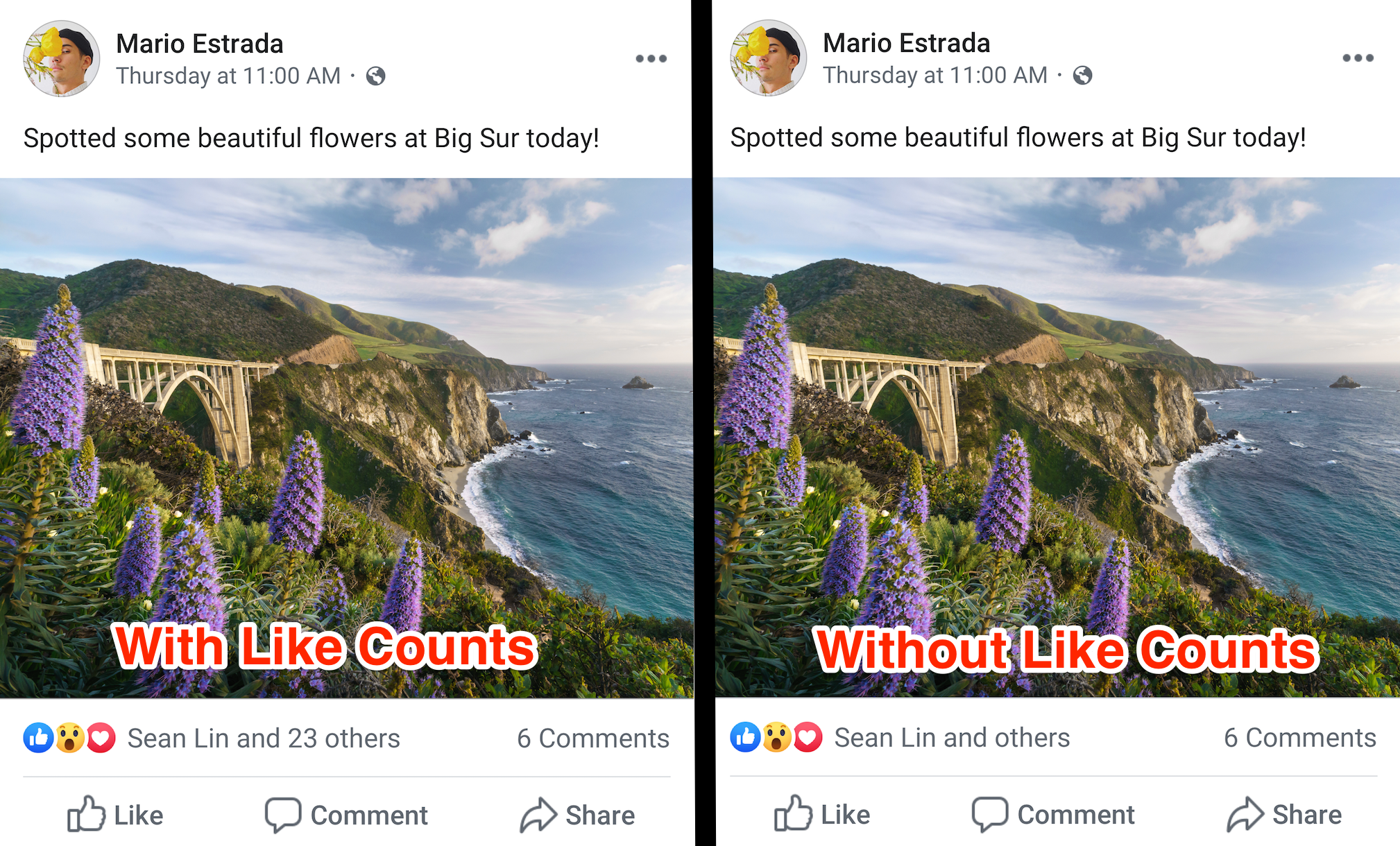 The launch of the hidden Like counts test makes available what we reported Facebook was privately prototyping earlier this month, as spotted in its Android code by reverse engineering master Jane Manchun Wong. The test will run in parallel to Instagram’s own hidden Like count test we also scooped that first tested in Canada in April before expanding to six more countries in July.

“We are running a limited test where like, reaction, and video view counts are made private across Facebook” a Facebook spokesperson tells me. “We will gather feedback to understand whether this change will improve people’s experiences.” If the test improves people’s sense of well-being without tanking user engagement, it could expand to more countries or even roll out to everyone, but no further tests are currently scheduled.

Facebook’s goal here is to make people comfortable expressing themselves. It wants users to focus on the quality of what they share and how it connects them with people they care about, not just the number of people who hit the thumbs-up. The tests are being conducted by the News Feed team that falls under VP Fidji Simo’s jurisdiction over the main Facebook app. While the Instagram tests are starting to get data back, Facebook tells me it’s own tests are necessary since the apps are so different.

As you can see, the Like button itself remains visible to everyone. Comment counts will still be displayed, as will the most common types of reactions left on a post plus the faces and names of some people who Liked it. Technically viewers could go into the list of people who Liked a post and try to count, but the test stops Facebook from slapping people up front with insecurity.

Without a big number on friends’ posts that could make users feel insignificant, or a low number on their own posts announcing their poor reception, users might feel more carefree on Facebook. The removal could also reduce herd mentality, encouraging users to decide for themselves if they enjoyed a post rather than just blindly clicking to concur with everyone else.

As I wrote about 2 years ago, a collection of studies identify the harm Facebook can do. They found that while chatting with friends and comment threads on Facebook made people feel better, passively scrolling and Liking could lead to envy spiraling and declines in perception of well-being. Users would compare their seemingly boring life to the well-Liked glamorous moments shared by friends or celebrities and conclude they were lesser.

For example, Krasanova et al discovered that 20% of the envy-inducing moments users experienced in life were on Facebook, and that “intensity of passive following is likely to reduce users’ life satisfaction in the long-run, as it triggers upward social comparison and invidious emotions.”

One concern is that Facebook Pages that have large followings and often get more Likes than individual users’ posts could miss out on extra engagement and reach without that herd mentality. Some Canadian influencers have complained about reduced reach since the hidden Likes test launched their on Instagram, but there’s been no conclusive data to prove that and Facebook will still use the number of Likes as part of its ranking algorithm.

If Facebook wants to build a social network people continue using for another 15 years, it has to put their well-being first — above brands, above engagement, and above ad dollars. It also needs better controls for notifications and warnings when you’ve been passively scrolling for too long. But if the Like hiding works and eventually becomes standard, it could help Facebook get back to the off-the-cuff sharing that made it a hit at colleges so long ago. No one wants to be in a life-long popularity contest.